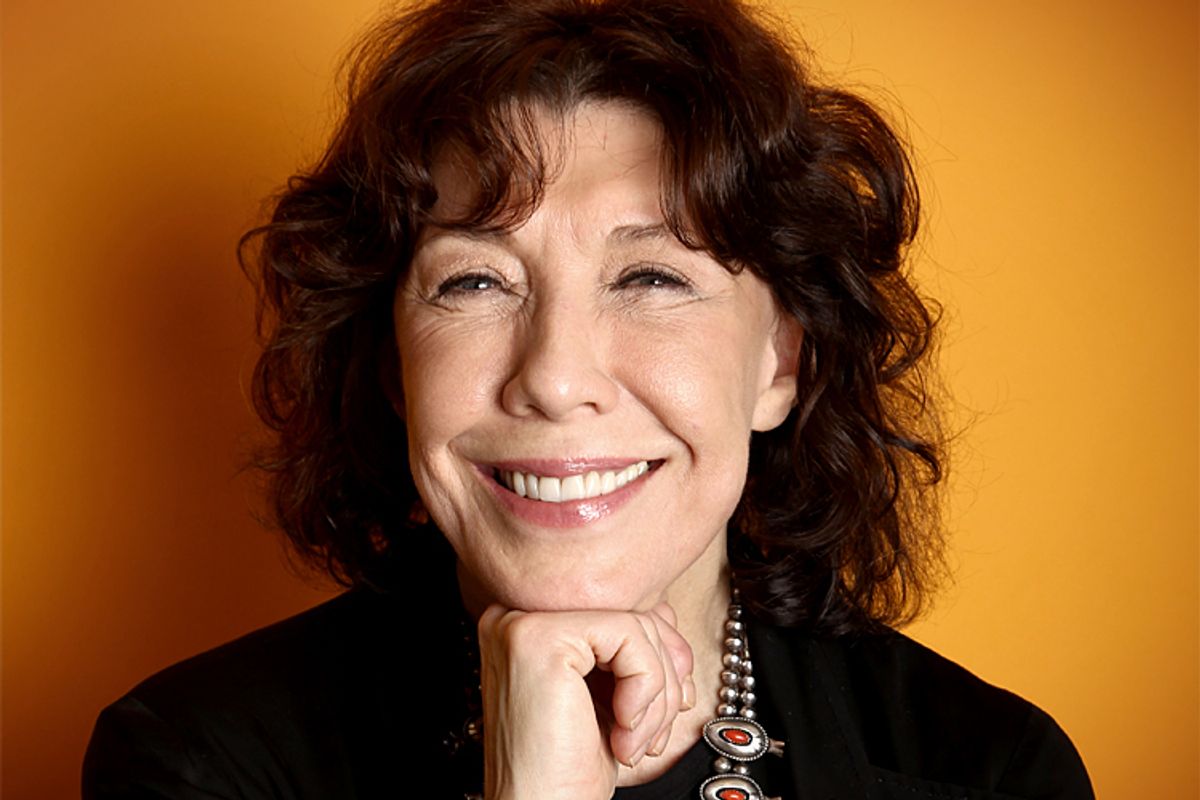 Lily Tomlin doesn't just play a feminist in the upcoming film "Admission" -- she's been a real-life pioneer, making her way in the movie industry and openly sharing life with her partner, Jane Wagner. In "Admission," Tomlin milks the movement for laughs as Tina Fey's mother, a woman who lives in isolation, building her own bicycle and reading up on theory; she even demands that Fey's character call her by her first name: "Mom" is too outmoded a term. We spoke to Tomlin about "Admission" and her life in Hollywood.

What inspired your performance as a radical feminist?

I was part of the feminist movement! I knew feminists who'd written important books. I felt I understood a little bit about where Susannah was coming from, how she'd lived her life, or tried to live her life. I didn't really input dialogue except in the most perfunctory ways. Ideally I wanted to have -- I'd had a double mastectomy as the character. I wanted her to have a breast plate tattoo -- that empowerment, that Amazonian response, was part of her statement too. But it was a demanding thing to get finished. I settled for a tattoo of Bella Abzug, even though young women don't even know who Bella was.

So do you not think feminism is relevant anymore?

With all movements, people come forward and then there's a setback. We think we've vanquished some oppressive regime in some part of the culture, and we realize we haven't. Look at all the steps they're trying to take backwards with women in our society. You keep revisiting stuff -- hopefully they won't take hold, and someone will have to struggle against them again. Old policies and habits and societal mores die hard.

"9 to 5" had a specific theme and was written very directly and purposefully toward the workplace, daycare, equity in pay, flexible hours, probably healthcare, things that served the community of workers. Equal pay. Some of those things have improved, and we've made progressive moves. Some of them haven't been acknowledged in our country or cities, maybe least of all in large corporations. I don't know the exact state of our corporate culture. I doubt there are many employers that are that expansive in their desire for the welfare of their employees. And people are constantly trying to make labor cheaper. We know that. That's nothing new.

Wages have been static in this country while profits have been huge. You can only make comment within the range of what you're presenting in this movie, which deals with human relationships between people and how they represent themselves. I was interested in having been a feminist in that era, I still consider myself a feminist, knowing what it is to be a person who's lived a long time, with core beliefs, a philosophy -- clinging to it, trying to be absolutely true and not betray it when there are a lot of things going on around you. She created a mythology around it that isolated her from her daughter.

It sounds like you relate in some way. Do you feel like you were a pioneer for feminism in any way?

It's hard to relate to it in that way because I've always been identified as a comedic actress or a creator of kinds of different characters and culture types. I was never a leading lady in the classic sense, even when I was younger. They wouldn't give me a leading lady role in a traditional movie. [Robert] Altman cast me in "Nashville" because he was not traditional. It was a time when I was identified as Ernestine, that girl on "Laugh-In."

But I was trying to create something else for myself to do. I was never an ingénue either. People would point out actresses and say, "Do you know who that is?" They'd say, "You'll do what she's doing when you're 50 or 60," when I was 20. But I'm not going to wait around. It never dawned on me not to make work for myself. I started doing an act. And the act kept me from being on "The Match Game."

You didn't make that much money on "Laugh-In." What were you going to do the other half of the year? By the time I got well-known, I had an act, I would go up at the Improv or wherever I could get a spot. I could create specials for myself. I was lucky I recognized what it was that was possible: With not a lot of forethought I found a way to work all the time. I wasn't competing for traditional kinds of roles. I wasn't one of seven young actresses between 18 and 30 competing for the lead.

That's why I've always admired Tina. I can see that girl as a force. She's completely self-possessed or at least appears to be. She's a master of her own destiny. People like her have a sensibility and they honor it. They don't know another way. I recognize that in her.