What's not being taught about the Iraq war

Don't blame the textbooks -- which can be surprisingly good. Teachers aren't encouraged to bring it up 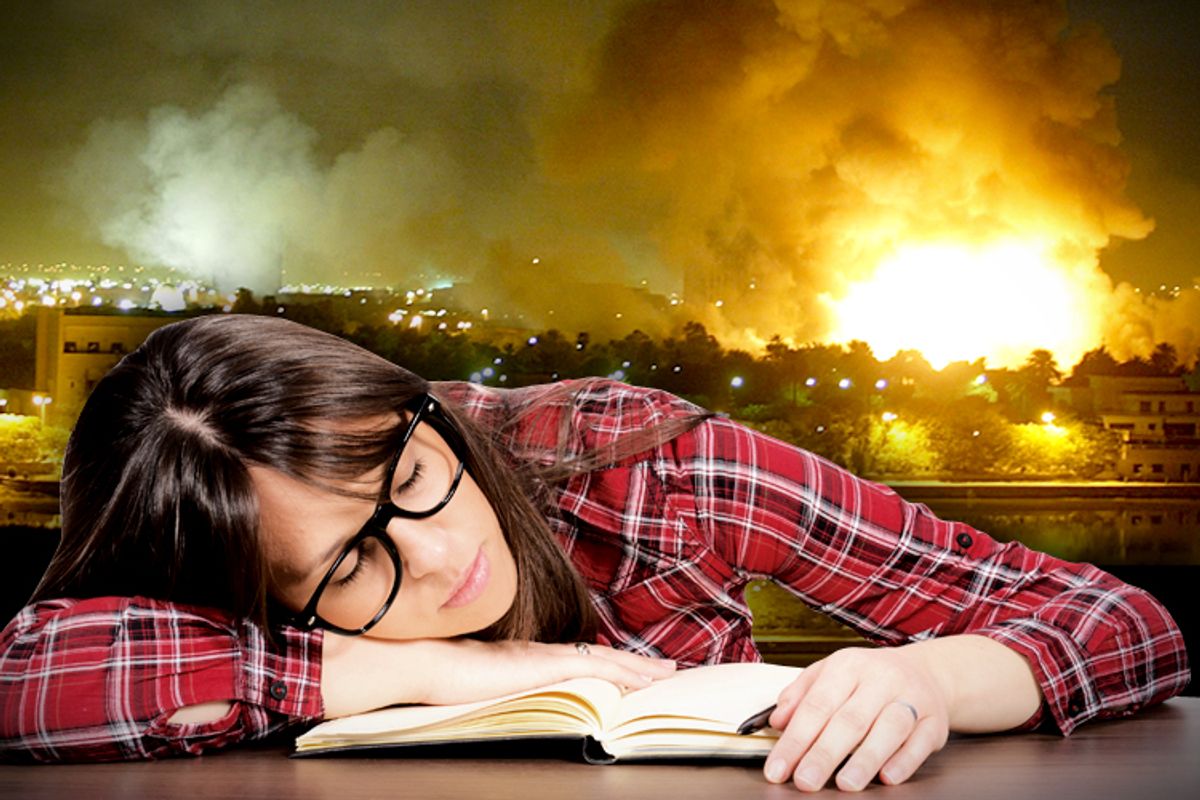 Upon the 10th anniversary of America’s war in Iraq, a critical question with serious ramifications has been little explored: What are our children being taught in schools about the conflict, as it passes from "current events" into history?

To answer this question, one obvious place to start is school textbooks. I looked at several of them, and was happily surprised. The books present a fairly complex and balanced view of the war in Iraq, avoiding the falsehoods and sugarcoating that has so often marred American history instruction. But textbooks only tell part of the story.

Just as important is what is actually emphasized in the classrooms, and the ability of teachers to engage in real inquiry. Unfortunately, a combination of school policies and judicial decisions have made it so that many kids learn little or nothing about what we have done in Iraq, or why we have done it.

I’m a professor of education and history, and wrote a book examining conflicts over history in American public schools. But for me, this probe is more than theoretical: My daughter is an 11th grader in a suburban public high school, where she takes Advanced Placement U.S. History.

Her textbook, "The Enduring Vision: A History of the American People," has a 2009 edition that carefully examines the Iraq and Afghanistan wars. It includes lengthy passages about controversial issues, including prisoner abuse overseas and domestic surveillance at home. Ditto for the 2009 edition of another textbook, "Out of Many: A History of the American People," co-authored by Yale’s John Mack Faragher, which is also used in many high schools around the country. Its new section on the Iraq War leads off with a picture of George W. Bush’s now-infamous “Mission Accomplished” photo op in May of 2003, when Bush declared that “the United States and our allies have prevailed.” But they hadn’t, of course, and the book pulls no punches about that. Parts of Iraq “plunged into chaos” after the U.S. invasion, which “strengthened a new generation of terror networks now drawn to do battle with American forces," the book declares.

It also disputes American claims about weapons of mass destruction in Iraq, citing critics who charged that Vice President Dick Cheney and Secretary of Defense Donald Rumsfeld had “manipulated Pentagon intelligence estimates, selectively emphasizing data based on ideology rather than dispassionate analysis.” The section concludes with a long passage about prisoner abuse and torture at Abu Ghraib. Although Bush expressed “deep disgust” at photos of the abuse, the book notes, White House memoranda revealed that legal counsel Alberto Gonzales had urged Bush to declare the treatment of suspected terrorists exempt from Geneva Convention accords on war prisoners.

So our textbooks aren't simply spouting pro-American propaganda, like they once did, and that's certainly reassuring. But Cheney et al. needn’t worry about a new generation of MoveOn.org protesters (who also get an approving nod in Faragher’s book) streaming out of American high schools. You wouldn't sense much controversy about America's wars in Iraq and Afghanistan if you walked through the halls of my daughter's school, or if you sat in on her classes. Indeed, you might not know we're at war at all.

That’s partly because these conflicts have gone on so long. She was 5 years old when we attacked Afghanistan (which is described at the end of her textbook). Now she’s 17, and we’re still there. How can you take note of something that’s always been around you? It’s all the kids know, which means they often know next to nothing about it.

Then there’s the absence of conscription, which means that almost none of these kids will go abroad to fight. In America, we leave that to the lower-middle-class and the poor. In a few inner-city high schools, teachers have raised hackles about military recruiters and have invited “counter-recruiters” to visit.  Overall, though, there’s often even less critique of the wars in our poorer school districts than there is in our wealthier ones. The teachers have their hands full already, keeping order in overcrowded classrooms, and the kids often see the military as their only route into the middle class.

Let’s be clear: There was never a democratic golden age in America’s schools, when students and their teachers engaged in full-throated debate about the events of the day. During both world wars, teachers were fired for raising questions about them. And in the Vietnam era, as anti-war protest drifted from colleges into the high schools, many teachers tried to muzzle it. Some of them threatened to fail or downgrade students who wrote or talked about the war. And a 1971 survey found that over half of American social studies teachers spent less than 10 percent of class time on “controversial issues,” including the conflict in Vietnam.

But today, in many classrooms, there’s literally no time for any of that. Starting in the 1980s, with the “Back to Basics” movement, states began to mandate minimum-competency examinations for high school graduation. The 1990s brought another round of state-level tests, seeping into middle and elementary schools. And then came No Child Left Behind, the 2002 federal law requiring yet more exams -- and tying various sanctions, positive and negative, to the outcomes. More than at any point in the past, schools would be judged by how their students performed on standardized tests.

Increasingly, then, anything that didn’t promise to raise the kids’ scores got left by the wayside. As always, the best teachers continued to question students about current affairs. But it took real courage to do so, in the face of ever more oversight and pressure from test-minded principals and superintendents.

Then there were the lawyers, and the judges. During these same years, American courts significantly reduced the speech rights of teachers in their own classrooms. So discussing the war in Iraq wasn’t just a diversion from your most urgent job, which was preparing the kids for the test. It could also mean the end of your job, period.

Just ask Deborah Mayer. In January 2003, as a first-year elementary school teacher in Monroe County, Ind., Mayer taught a lesson from Time For Kids -- her district-approved student current-events magazine -- on the looming American invasion of Iraq. The article contained a report on an anti-war demonstration in Washington, D.C., which prompted a student to ask Mayer if she would ever attend such a protest. Mayer replied that she had recently driven by a “Honk for Peace” march in nearby Bloomington, and had honked her own horn in support. She also said that people should seek peaceful solutions to their conflicts, noting that her own school trained student mediators for exactly that purpose.

After parents got wind of this exchange and complained, Mayer was told that her contract would not be renewed. A district court upheld the school board’s decision, and then a federal appeals court did the same. It drew on the Supreme Court’s 2006 Garcetti v. Ceballos ruling, which held that public employees do not have free-speech rights at work; instead, their words belong to their employer.

“The school system does not ‘regulate’ teachers’ speech as much as it hires that speech,” the appeals court underlined. “Expression is a teacher’s stock in trade, the commodity she sells to her employer in exchange for a salary. The teacher hired to lead a social-studies class can’t use it as a platform for a revisionist perspective that Benedict Arnold wasn’t really a traitor, when the approved program calls him one.”

So if the “approved program” says that we should “Support our Troops” -- and that we shouldn’t say anything else about the war in Iraq, or in Afghanistan -- well, that’s what the teacher has to do. Never mind that she has a mind of her own, or is enjoined with helping her students make up theirs. She is a civic ventriloquist, paid to repeat the words that the state puts in her mouth.

To be sure, we’ve all had teachers who tried to impose their own opinions upon us. That’s indoctrination, not education. But the best guard against it is not removing controversial questions from discussion, which is what authoritarian states have historically done. Instead, we need to prepare teachers who can model the skills of democracy: inquiry, reason, tolerance and dialogue. And we need to give those teachers the space to practice them.

I’m not optimistic, on either count. I teach at a school of education, where the students are imbued -- if not indoctrinated -- with the gospel of “social justice.” Too often, though, that means teaching a single truth instead of encouraging our students to find their own. And when they become teachers, you can bet they’ll repeat the same error.

In the fall of 2003, after the war in Iraq had begun, I flew to Chicago to give a speech about it to local school teachers. I told them that their duty was neither to get kids to support the war, nor to oppose it; it was to provide students with the information and the skills to arrive at their own, reasoned judgments about it. Afterward, a very nice young teacher thanked me for my talk. “You’re right,” she told me. “If we can get the kids talking and thinking, they’ll realize that the war is a great imperial misadventure.”

That’s a near-perfect embodiment of what my own students have learned to call Zimmerman’s Fallacy: If everyone actually reasoned from the facts, unencumbered by cant and deception, they’d agree with me. But they won’t, and they don’t, and they shouldn’t. Democracy depends upon a shared faith: that people of equal intelligence can reason from the same facts to different conclusions. If you don’t believe that, you don’t believe in democracy. And you shouldn’t be a public school teacher.

Since 2003, to be sure, there has been plenty of cant and deception about the war in Iraq. And there are lots of good reasons, in retrospect, to call it a misadventure. But there’s still a case to be made for it, too. Our kids need to hear that. Instead, in many schools, they hear almost nothing. And the silence is deafening.

So, how much are our children learning about the war today? It’s only one example, but my daughter’s experience may be instructive. Remember that textbook I described to you, with its passages about American torture and surveillance? It turns out her class isn’t using that 2009 edition, but still using the one from 2002. It came out right before the U.S. invaded Iraq.