Obama is immune to March Madness

The president made his latest NCAA tournament selections Wednesday. Would it kill him to go against the chalk? 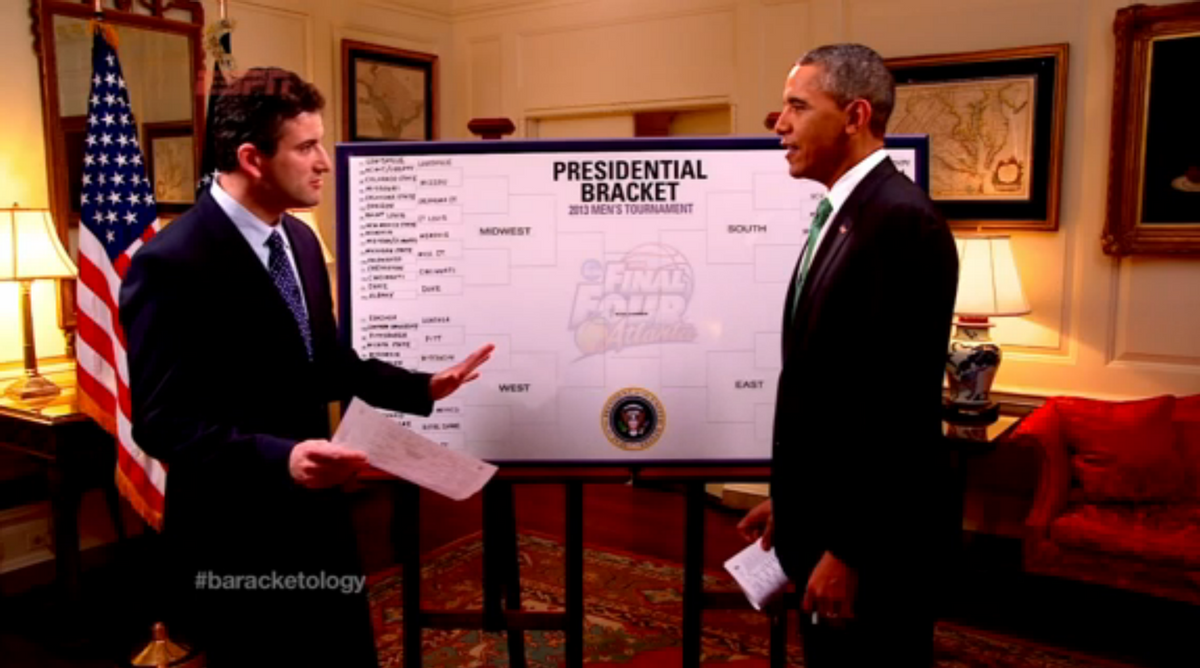 March Madness kicks off Thursday, which means it's time for another unimaginative set of Final Four picks from our bracketologist-in-chief. By his standards, President Obama threw caution to the wind this year, selecting Florida, Ohio State, Indiana and Louisville, two top seeds, a second seed and a third seed to advance to the Final Four in Atlanta. But his championship game still features Indiana and Louisville, both number ones.

God forbid he pick a sleeper like UNLV (3) or Michigan (4). "I'm going with Louisville," the president told ESPN's Andy Katz. "I know it's not a surprise pick. And I'm going with Indiana. I think this is Indiana's year."

It's always a number one seed's year with the president. Since Obama began publicly filling out the tournament bracket in 2009, he has been almost constitutionally incapable of choosing against the chalk. His Final Four and championship picks over the past five years have gone as follows (correct picks in bold):

The president is entitled to his boring picks, of course, but why does he make them into such a spectacle? George W. Bush never televised his bracket selections. Neither did Bill Clinton, although he did travel to the Final Four to watch the University of Arkansas win the title in '94. Richard Nixon was a college sports fanatic, but his tastes leaned more towards football.

Perhaps that's why it's so tempting to treat Obama's brackets, which he presents with such decorousness, as a kind of Rorschach test. Would a president with the gumption to pick Georgetown (2) to win it all this year have struck a better fiscal cliff deal in December? If he were more inclined to gamble on a Cinderella like Colorado (10), would we still be facing draconian sequester cuts? Would Social Security still be on the table?

The answer is, probably. After all, Obama's just playing the percentages, however joylessly.