Is a not-so-grand bargain back? 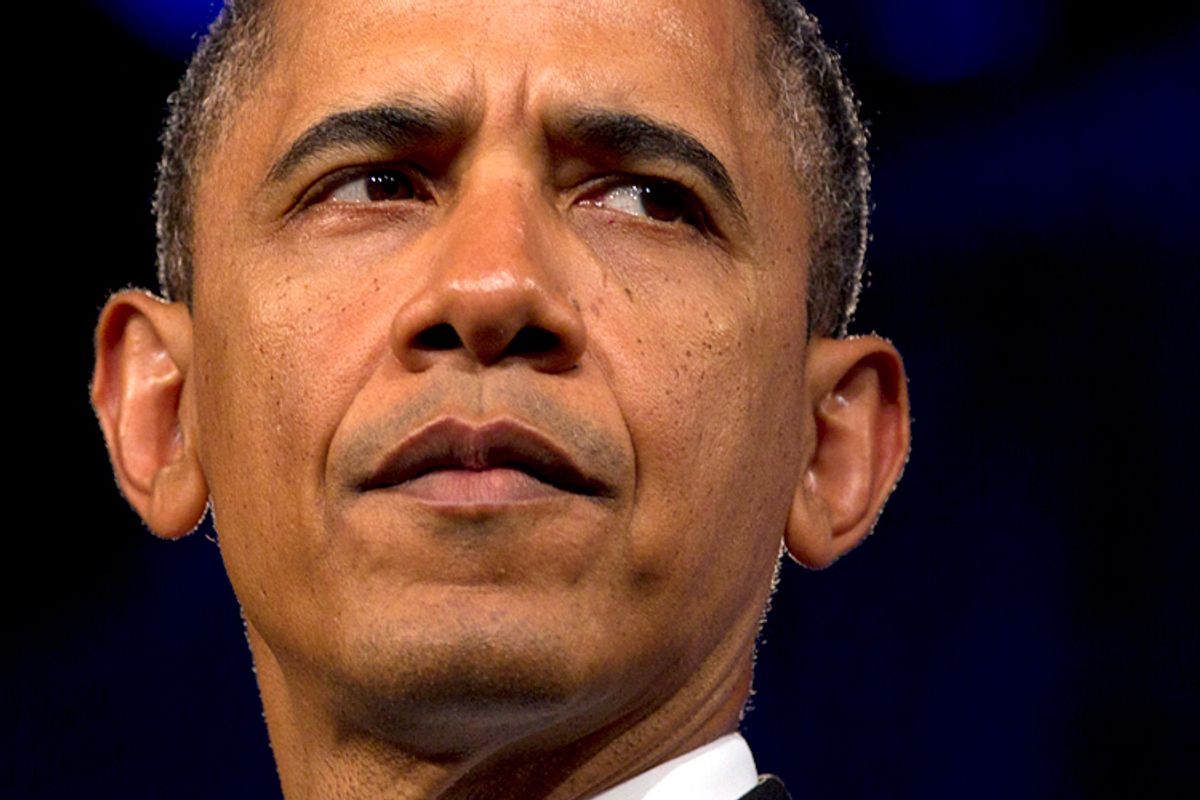 The National Journal’s Ron Fournier apparently breaks some news today, with House GOP sources telling him, not for attribution, that they’re open to a compromise that includes tax revenue in order to achieve a deficit-cutting “grand bargain” – as long as it contains the entitlement cuts President Obama says he’d support.

For two years now the only sure thing standing in the way of an entitlement-cutting, not-so-grand bargain has been the intransigence of the far right House GOP caucus. So far, that’s been mostly a win for the president. He gets to say he’s for compromise, including “sensible” entitlement reductions, without ever having to make them. And his most fervent progressive devotees get to say he doesn’t really mean it, it’s just a bargaining stance, and since no deal is ever made, Obama outfoxed his opponents again. He’s the only adult in the room!

But the must-read part of Fournier’s piece isn’t the news that the House GOP is open to a deal, which is important, but his explanation of why:

On one level, this isn’t news: MSNBC’s Luke Russert quoted his GOP sources saying the same thing last December. "If they have entitlement cuts as part of this deal, they would make it, through their marketing ways, and they’re better communications operatives than Democrats, that the president would own the entitlement cuts," Russert said. "They would say 'the president owns that' in 2014 and 2016." Now comes Fournier, a Beltway veteran, and he’s pushing this story hard. It’s too bad so many Democrats aren’t paying attention to the political trap that’s being laid for them.

Let’s go over what Obama and other top Democrats have supposedly agreed to: the so-called chained CPI for Social Security – a way of formulating cost-of-living adjustments that amounts to a benefit cut – and some kind of “means-testing” for Medicare recipients. Wealthy seniors already pay higher premiums, but means-testing would also limit the services they receive.

And let’s revisit why those are bad bargains. The chained CPI is not, in fact, a more accurate measure of how consumer prices rise. It reflects the costs and consumer behaviors of all Americans, when we know seniors spend much larger sums on two things, healthcare and housing, that aren’t subject to the kinds of cost-cutting and product-substitution -- switching out chicken for steak, to use the cliché that explains why rising costs aren’t as problematic as they may seem – that let non-seniors cope with higher product prices. Meanwhile, means-testing for Medicare is the first step to making it a welfare program, subject to the same marginalization, demonization and constant cutting that other welfare programs endure.

Social Security can be “fixed” by raising the level at which incomes are taxed, and perhaps by adopting a new inflation measure that accurately reflects the way seniors live, rather than all consumers. Medicare costs can be controlled by a range of innovations and efficiencies – some of which are already working to reduce Medicare spending.

Jared Bernstein had a must-read wonky column Tuesday (h/t Digby) showing that the Congressional Budget Office’s 10-year projections for the growth of Medicare and Medicaid spending have dropped by $500 billion compared to projections made just a few years ago.  Healthcare costs overall are growing more slowly in the last few years, and yes, some of these lower-cost years were during the recession. But while healthcare costs overall grow more slowly during recessions, as people cut their personal spending, Medicare costs don’t, since they tend to be for medical expenses that are more urgent, and mostly paid for by the government anyway, so pinched consumers don’t have to economize.

Nobody knows why costs are down for sure, but there’s good reason to believe that it has to do with innovations and efficiencies introduced over the last few years, including by Obamacare, including better technology, accountability for hospital readmissions and other cost controls. The bottom line for Bernstein:

My guess is there’s something lasting going on here, and that means the doctor has just prescribed a very large chill pill for those who want to whack away at Medicare and Medicaid and CHIP because “they’re going bankrupt…bankrupt I tell you!”  They’re not, and our energies would be much better spent on careful research on the factors behind these recent cost trends and how we can build on them.  The goal is not to diminish these extremely valuable programs.  It’s to enhance their efficiency so as to ensure that they remain a solid part of American social policy.

As Digby also notes, this means Obamacare could be the president’s lasting legacy in terms of deficit reduction, too; he doesn’t need an entitlement-slashing grand bargain. Unless he wants one.

Greg Sargent makes the sobering case that progressives ought to be thinking about whether they’re willing to trade entitlement cuts for lifting the sequester cuts, since it’s looking like Republicans may have won that political battle for now: There’s nothing like the outcry many Democrats predicted once the cuts took effect. And yet they’re having an impact nonetheless, especially for low-income families and the programs that serve them. Progressive caucus members like Jan Schakowsky and Keith Ellison told Sargent they think it’s too soon to begin mulling such a trade-off, and I agree.

All week I’ve found myself thinking Paul Krugman was right when he compared the selling of the Iraq War 10 years ago to the selling of entitlement cuts, as a comparable sickness of Beltway delusion and “seriousness” that gradually spreads to include liberals who want to be taken “seriously” in newspapers, magazines, the blogosphere, TV and Twitter.

I’m not saying that includes Sargent – even though Fournier includes him as a progressive who’s getting “serious” about mulling entitlement cuts in exchange for restoring the worst of the sequester cuts. Sargent’s column raised the question; it didn’t endorse an answer. But with the deficit actually shrinking at the fastest rate since just after World War II, and even Medicare costs rising more slowly than they have in years, despite an aging population, progressives need to be fighting the Beltway deficit hawks, not making excuses for Obama caving to them.