Paul Broun runs for Senate by trolling his colleagues 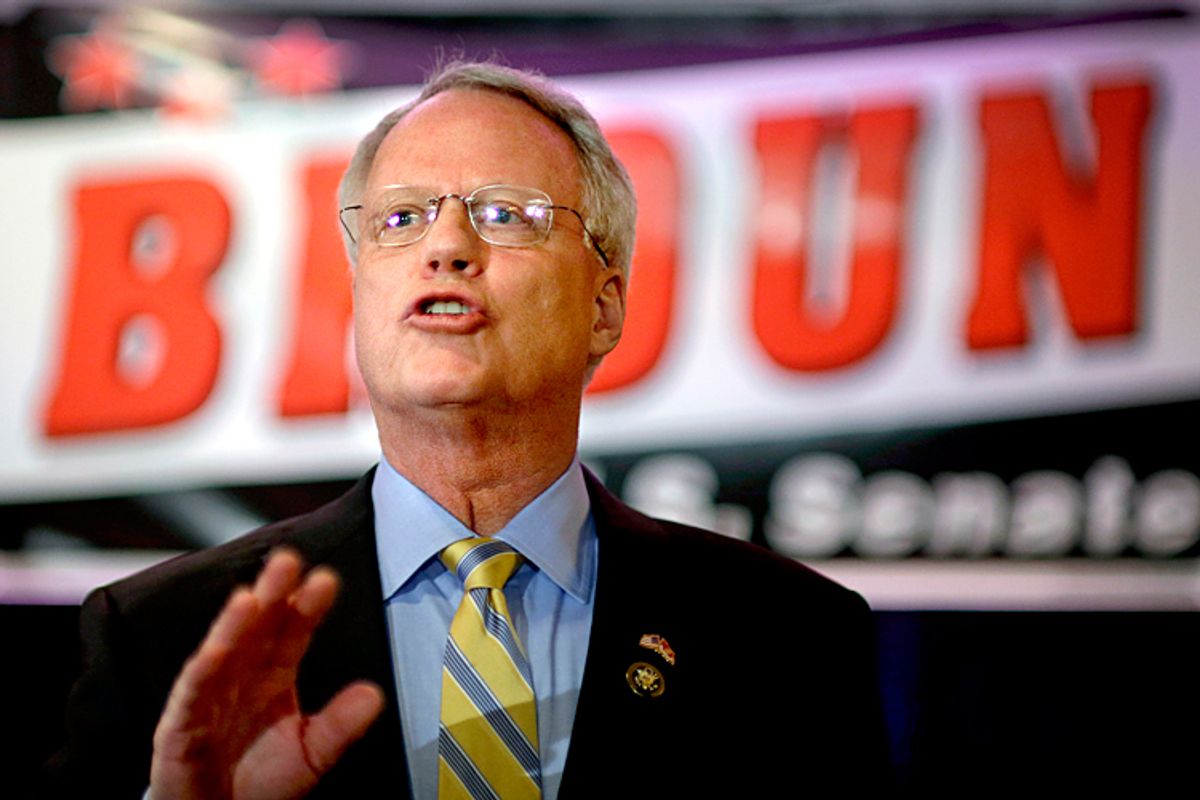 I'm just going to quote myself writing in January about Broun's decision to run:

Georgia's primary election runoff rules might prevent Broun from eking out a plurality victory over a bunch of less-crazy candidates, but even if he doesn't win, he’ll definitely push the entire field further to the edge of the fringe that the national party has been trying to back away from since November.

Since I wrote that, a couple of things have happened. First, the Republican National Committee released a huge report begging the Republican Party to moderate its language and some of its policies. Second, two members of the Republican House delegation from Georgia voted against the most recent Paul Ryan budget -- because they found it to be insufficiently conservative. One of those members was Broun, who published an Op-Ed decrying the budget before the vote. The other was Rep. Phil Gingrey, who is also considering running for the Senate seat, and thus "can't let Broun get to his right," as Dave Weigel says.

You can probably already figure out the flaw in Gingrey's plan. Broun just moved to the right of Paul Ryan, because why the hell not. Broun will out-conservative all comers. Gingrey is no slouch when it comes to being a closed-minded throwback, but he is a man who has already had to publicly beg Rush Limbaugh for forgiveness. Paul Broun has never said a single thing Rush Limbaugh could possibly object to. Gingrey has to be prepared to make himself roughly adjacent to Francisco Franco to compete with Broun. If Broun feels like it he'll wrap himself in a Confederate battle flag and promise to pass a bill urging the mandatory drone-assassination of hippies.

Broun isn't just affecting Gingrey's votes, either. Other Georgia Republicans -- including Reps. Jack Kingston and Tom Price -- want that open Senate seat, and Broun is clearly just taking pleasure in screwing with them, if this Politico piece is any indication.

But not only did he ultimately vote against the bill, but he also opposed the procedural motion to bring the bill to the floor — a nearly unheard of move by a member of the majority in House politics because it jeopardizes leadership’s control of the floor.

The dominoes then began to fall. Kingston and Gingrey ended up voting against both the procedural motion and the resolution itself. Price voted in favor of the rule and the CR.

Next up was the Supporting Knowledge and Investing in Lifelong Skills Act, a job-training bill promoted by Majority Leader Eric Cantor (R-Va.) and sponsored by North Carolina Rep. Virginia Foxx. Broun told Foxx he would support the legislation, sources said, but then voted against the bill only after all other Georgia Republicans voted for it.

Yes, Broun may legitimately be an idiot, but he knows what Georgia Republican primary voters want: someone who thinks a lawmaker's job is best performed as a sort of high-level trolling of his colleagues, and liberals. So Broun is now just lying to leadership and setting his opponents up to vote "yes" on things, even though voting "no" is always the True Conservative option.

This is going to be a fun one, too bad one of these horrible people will be in the Senate eventually.