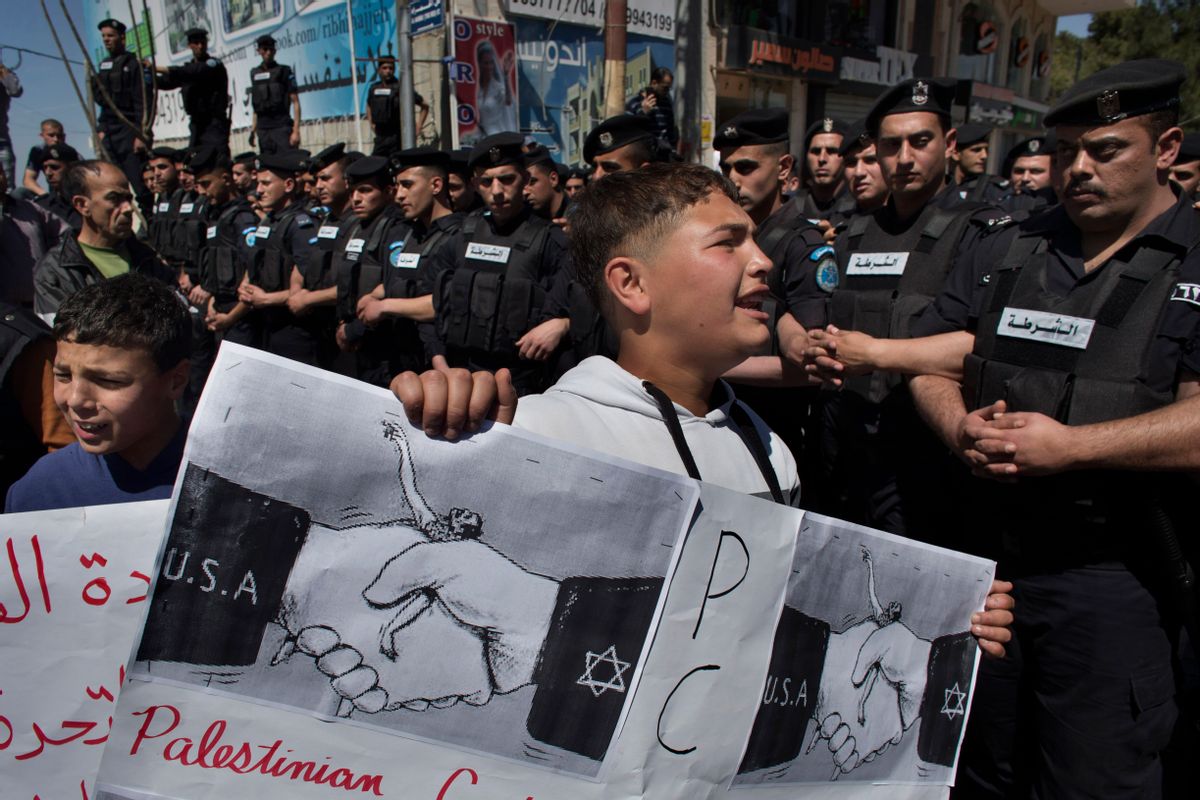 RAMALLAH, West Bank -- U.S. President Barack Obama is meeting Palestinian officials on the second day of his Mideast tour to emphasize the importance of reaching an Israeli-Palestinian peace deal, a message underscored Thursday when Palestinian militants in Gaza launched rockets into southern Israel.

After a visit to Israel's national museum - where he inspected the Dead Sea Scrolls, which highlight the Jewish people's ancient connection to the land that is now Israel - Obama headed to the West Bank to tell the Palestinians that the creation of a Palestinian state remains a priority for his administration.

He is not bringing a new plan to relaunch peace talks, but in meetings with Palestinian Authority President Mahmoud Abbas and a speech to Israeli students later in the day, he will appeal to both sides to halt unilateral actions that make negotiations more difficult.

Those troublesome actions include continued construction of Jewish housing settlements on land claimed by the Palestinians and repeated Palestinian efforts to achieve recognition at the United Nations in the absence of a peace agreement.

Yasser Abed-Rabbo, an aide Abbas, said before the meeting that the Palestinians will tell Obama they won't return to negotiations with Israel without a settlement freeze.

"There can be no real (peace) process with the continuation of settlement activities on our lands," he said, adding that the issue of settlements is central to the Obama-Abbas meeting.

Palestinians argue that they cannot negotiate a border between Israel and a future Palestine while Israel unilaterally shapes that line through accelerated settlement building.

The Palestinians want a state in the West Bank, Gaza and east Jerusalem - territories Israel captured in the 1967 war - but are ready for minor adjustments to accommodate some settlements closest to Israel. Since 1967, Israel has built dozens of settlements in the West Bank and east Jerusalem that are now home to 560,000 Israelis - an increase of 60,000 since Obama became president four years ago.

Palestinians argue that only strong U.S. pressure can get Israel to change course and halt its settlement enterprise, but doubt Obama is willing to do so. Obama's wooing of Israeli public opinion during his current trip has further enforced such perceptions.

In downtown Ramallah, several dozen people protested against what is perceived here as a strong U.S. bias in favor of Israel.

Obama "should take immediate action to stop settlement activity because the passivity of his position toward settlements is happening while the very last option of a two-state solution is being killed by Israeli settlements," said Mustafa Barghouti, a leading Palestinian activist.

On Wednesday, Obama reaffirmed the unwavering U.S. commitment to Israel's security and noted there had been no fatal attacks on Israelis from the West Bank, which is controlled by Abbas.

That calm has not extended to Gaza, which is run by the militant Islamic Hamas movement. As Obama began his program Thursday, Israeli police said militants in Gaza had fired two rockets at the southern town of Sderot.

One of the rockets exploded in the courtyard of a house in Sderot early in the morning, causing damage but no injuries, said police spokesman Micky Rosenfeld. The other landed in an open field. Sirens wailed in Sderot shortly after the 7 a.m. rocket attack, forcing residents on their way to work or school to run to bomb shelters.

As a presidential candidate in 2008, Obama visited the border town, which is frequently targeted by rocket attacks from the nearby Gaza Strip. No group immediately claimed responsibility for the attack.

Over the past decade, Gaza militants have fired thousands of rockets and mortar shells at Israel, prompting Israel, with considerable U.S. assistance, to develop its Iron Dome missile defense system, which it credits with intercepting hundreds of rockets.

Immediately after his arrival in Tel Aviv on Wednesday, Obama and Israeli Prime Minister Benjamin Netanyahu toured an Iron Dome battery at Ben Gurion International Airport in a vivid display of U.S. security assistance to Israel.

Hamas has ruled Gaza since 2007 after ousting the rival Palestinian Fatah group in bloody street fighting. Fatah and the Palestinian Authority, led by Abbas, now govern only part of the West Bank.

In contrast to Israel, the Palestinians have shown little excitement over the Obama visit. In the run-up to the visit, demonstrators have defaced and destroyed posters of Obama in an expression of dissatisfaction with U.S. policy in the region.

In Jerusalem earlier Thursday, while examining the Dead Sea Scrolls and during a tour of a high tech exhibit, Obama and Prime Minister Benjamin Netanyahu continued the easy banter that the two leaders displayed on Wednesday. As Netanyahu read a facsimile of a scroll, Obama marveled that the Hebrew language had not changed much over the centuries.

Before the tech exhibit he was serenaded by Israeli singer Dudu Fisher and he later examined a range of inventions, from a snake robot ("My wife would not like this," Obama declared) to a motorized exoskeleton for people with paralysis of the legs.