A neonatal surgeon with no political experience has Republicans going gaga. When will they ever learn? 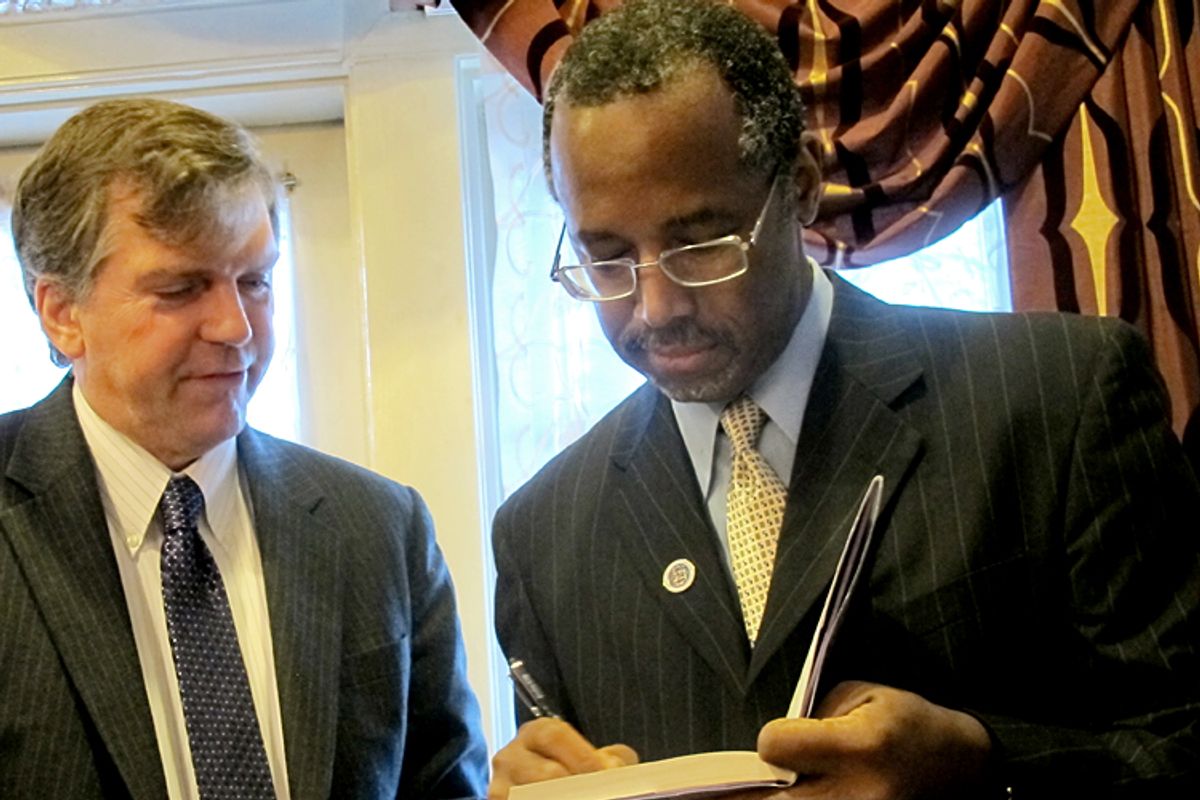 Remember way back to when Ted Cruz was the next savior of the Republican Party? That was, what, last week, right? And before that it was Marco Rubio, or Paul Ryan, or Bobby Jindal … and before that, before Sandy, it was going to be Chris Christie. And it’s not so long ago that Herman Cain was the next big thing. Or Michele Bachmann. Or, heaven help us, Newt Gingrich. And there’s always the Sage of Wasilla herself. That’s a lot of saviors over four years.

At any rate, forget all that: the new fantasy candidate for conservatives is Dr. Benjamin Carson, a neonatal surgeon, with no political experience, who achieved the status of dream presidential nominee by virtue of giving a good speech at the conservative conference CPAC last week. By late Thursday afternoon, he was explaining to CNN's Jake Tapper the circumstances under which he'd consider a bid for the White House in 2016.

What does it say about a party that it would hear a single speech by a non-politician and start fantasizing about him as its next presidential candidate?

Partially, on the surface, it shows (again) that Republicans still have no confidence in their own politicians. That was painfully obvious in 2011 – the one candidate who was never cast as a GOP heartthrob was Mitt Romney. It’s not surprising that it’s true today; parties out of the White House and with no obvious consensus nominee are often impatient with the choices they do have, and are tempted to think there’s some perfect option just over the horizon. Democrats even did that with Wesley Clark in 2004; it also happened for Republicans with an experienced candidate, Fred Thompson, in 2008. And, yes, Barack Obama had limited experience in national politics (although state legislative office is, after all, political experience) before he was nominated by the Democrats, but the party didn't explicitly trumpet inexperience as a virtue. Nor did Obama pretend he wasn’t a politician while he was running. An outsider and a new face on the national scene, yes, but clearly a politician.

Beyond the particular electoral context, it’s yet another example of how the Republican Party, and conservatives in general, currently have an attraction to symbolism over substance, which is part of why they aren’t very good at governing. And that, even more than demographic changes or specific problems with issues, is the biggest problem facing conservatives.

After all, the biggest problem for Republicans right now is still the fact of the George W. Bush presidency: the disastrous war in Iraq, the Great Recession, and drowning the odd city or two, just for starters. And indeed a large part of why the Bush presidency went so wrong had to do with his inadequate preparation for the job. With just a bit over one term as the governor of a state with a weak-governor system, and with practically no other political experience at all, Bush just wasn’t able to handle the job. While it’s possible that new information unveiled in the future might change these conclusions, from what we know he was easily manipulated by those around him, and often passive and reactive when he should have been challenging his own people.

That was true in particular of Iraq. As Richard Neustadt said long ago, presidents should try to look out for their own interests and realize that only the president really can do so – not the secretary of Defense, not the director of Central Intelligence, and certainly not the vice president. Indeed, when people in the administration are challenged – especially by others within the executive branch – a wise president will take that as a signal to investigate further. Yet we have no evidence at all that George W. Bush treated Gen. Shinseki’s congressional testimony about a far larger American presence needed in Iraq, for example, as a wake-up call that Bush’s own interests might be endangered by the war. Nor is there evidence that he pressed the intelligence community hard, or generally that he was at all worried that his presidency could be derailed by a war gone wrong.

A more experienced politician might have taken those warning signs more seriously. But there was little in Bush’s background to prepare him for that.

And why was Bush president in the first place? In large part because Republicans had mistakenly concluded from Ronald Reagan’s presidency that an actor thought to be not all that bright (and who certainly did not demonstrate a great mastery of facts) could be a great president as long as he had clear vision and determination and a strong stride and confident voice. In other words, that his symbolic strengths massively outweighed any substantive disadvantages.

That was surely wrong about Reagan, however. What Republicans should have seen was a successful two-term large state governor with years of political experience (including three national campaigns) who had both strengths and weaknesses in the White House. In other words, a top-notch politician.

Unfortunately for the GOP, they don’t appear to have learned much from the W. years. After all, not only were Palin and Cain and, now, Carson all basically political amateurs, but even Mitt Romney, after all, sought the White House with minimal political experience, and to the extent that he appealed to Republicans at all it was as a business – not a political – success.

So while it’s almost certain that Republicans will move on from their latest flavor-of-the-month (and for all I know Carson might make a perfectly fine candidate for other office), the odds are good that they’ll continue to undervalue demonstrated political expertise, especially governing expertise, and overvalue symbolic virtues in their presidential candidates. Which increases the chances that when they do win the White House, we may be in for another failed presidency.