When artist Shepard Fairey sends his mission patch to space, he'll boldly go where a few others have gone before 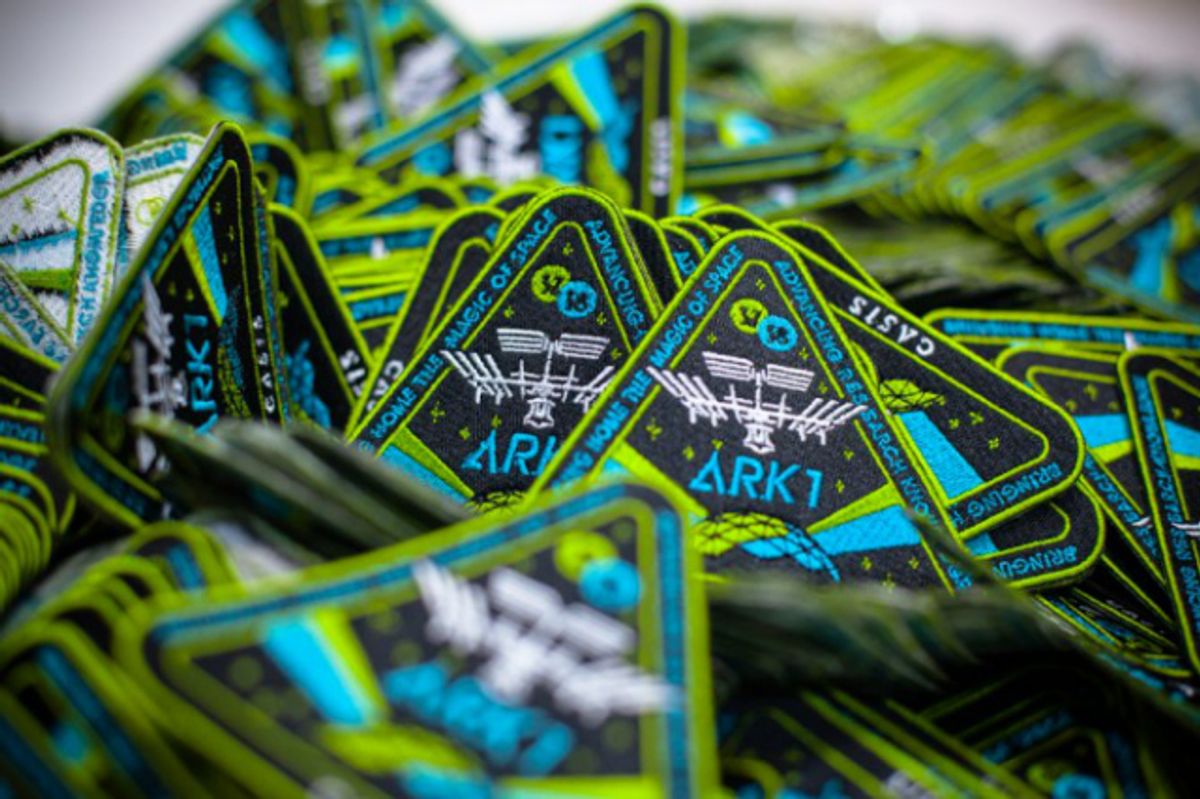 Now that street artist Shepard Fairey has designed a mission patch that will travel to the International Space Station, will other artists be drawn to this extraterrestrial exhibition opportunity? Fairey created the neon blue and green patch with Fiction, the design firm contracted for the patch for the ARK1 research mission of the nonprofit Center for the Advancement of Science in Space (CASIS) that will launch into the stars later this year. All space missions have had patches, going back to military traditions, and NASA’s space program in particular is an interesting one to look at. Sometimes the collaborations between an artist and crew resulted in some sweet sci-fi success, and some were just galactic failures.

Sometimes the crew takes the whole design process on themselves. For the Apollo 11 mission, which would be the first to land on the moon, astronaut Michael Collins took the lead. As he wrote in his book "Carrying the Fire," he traced some bald eagles from a copy of National Geographic and added the lunar landscape. But the eagle looked a little bit menacing and “hostile,” so the olive branch it had been clutching in its beak was put in its claws so that “all the menace disappeared.” Considering other crewmember-controlled patches have featured Looney Tunes characters front and center, the Apollo 11 patch was a design success.

Other times, a professional artist will collaborate with the crew, often one of NASA’s employed artists. For the Apollo 17 mission, Robert McCall, who did numerous mission patches, brought in an elegant touch with a classic of antiquity, the Apollo Belvedere. As for the odd abstraction of the American flag in the background with the eagle that looks like it was drawn with a shaky hand, that seems a little less compelling.

Non-NASA employed artists can also get pulled into the design, like sci-fi illustrator Frank Kelly Freas for the Skylab 1 space station patch, which can’t be called boring, even if the sunburst behind what is assumed to be the Earth does make the Skylab look like it is fleeing the apocalypse. Considering Freas was responsible for some of the more vivid pulp novel covers of the 20th century, perhaps that’s not too much of a surprise.

The patch for the almost-a-disaster Apollo 13 mission was worked on by Lumen Martin Winter, an artist who created murals throughout the country, particularly of majestically galloping stallions. Although crewmember Jim Lovell claimed that “the idea of the patch was essentially mine,” it’s the horses that make it stand out from the usual spacecraft-in-front-of-Earth designs. Oddly, the mural that the horses are based on reportedly ended up in a restaurant owned by Lovell’s son after Tom Hanks, who played Lovell in the "Apollo 13" movie, bought it and gave it as a gift.

Apollo 15 Patch, with work by Emilio Pucci (via NASA)

But sometimes if you bring an artist into the mix, there are clashes. Reportedly, Italian designer and lover of the geometric shape Emilio Pucci reviewed around 540 designs with the Apollo 15 crew, all of which, according to crewmember Al Worden in his book "All We Did Was Fly to the Moon," “appeared either too mechanical or had nothing to do with the flight.” The one they ended up using, after extensive help from an outside party, took out Pucci’s usual colorful hues and just left his stylized birds in flight. The result definitely looks like an unhappy compromise on both sides.

Perhaps this collision between aesthetics and proclaiming the actual details of the mission is why there aren’t more high-profile artists who work on space patches. However, with nonprofits like CASIS going to the International Space Station and working with graphic designers, perhaps we’ll see more colorful takes on this space tradition. It’s one of the most celestial spaces out there to show art.