Requiem for a dopey sports logo

First they came for the Tampa Bay Buccaneer. Now they're removing the Miami Dolphin's helmet. Is nothing sacred? 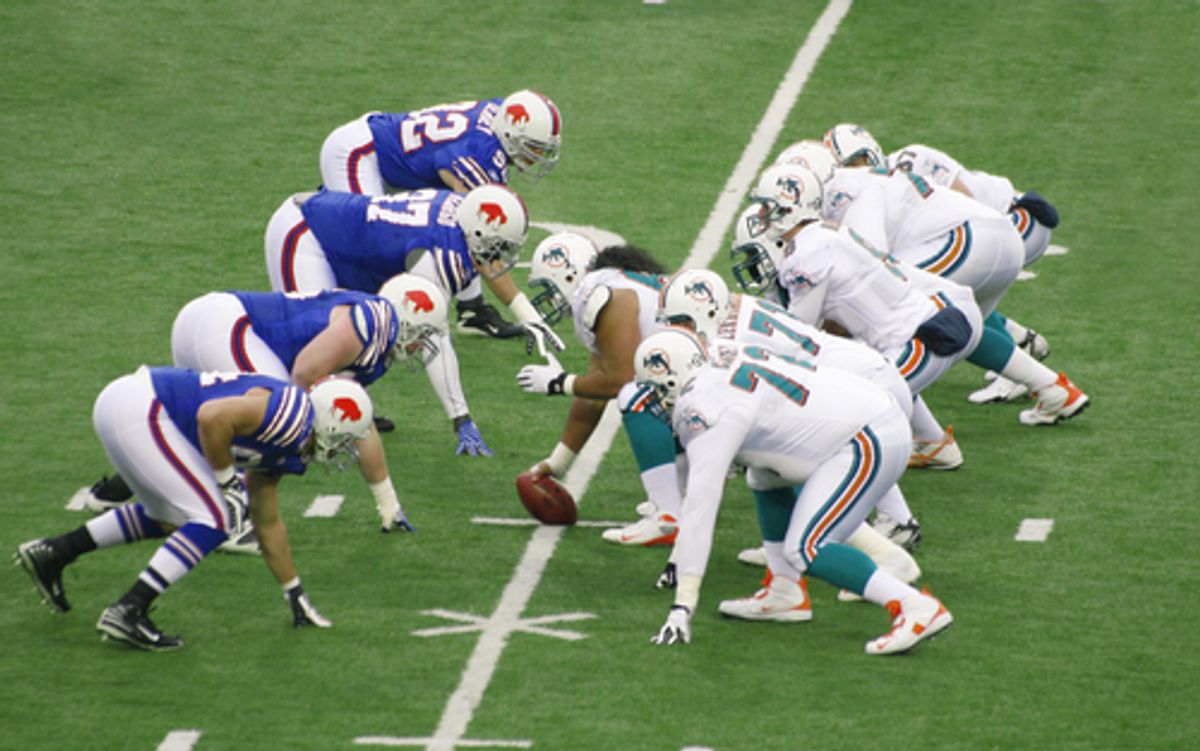 It's something to guard against, the urge towards reflexive nostalgia. What we remember about sports we remember in context, and that has a tendency to confer a richness or significance on those memories that might not necessarily be there. This is how we wind up with Buzzfeed-y "277 Things About The 1990s You Guys" listicles, and with the attendant sense that there is somehow something that matters to us about, like, Hanson or Melissa Joan Hart, when really our only relationship to them is that we remember them from when we were younger, simpler people. All worth keeping in mind. None of that, though, in any way diminishes the outrage that is the Miami Dolphins redesigning their logo so that it no longer features a smiling dolphin wearing a football helmet.

The new Dolphins logo, or more precisely what might be the new Dolphins logo (if UniWatch's Paul Lukas is more or less convinced, I'm convinced) isn't necessarily good or bad. It's a dolphin, if kind of sleeked-out and tuffed-up as befits the fact that it's a NFL logo, and thus is supposed to be sleek and tuff.

Admittedly, it's hard to come up with a real-world situation in which an actual dolphin would need to wear a helmet; maybe if it was operating a motorcycle, although there's a whole series of subsidiary unlikelihoods (how did the dolphin get a license, etc.) feeding into that. Although obviously if a dolphin were to be spotted riding a motorcycle, Florida would seem to be the most likely venue for it. I'm off topic.

The thing is this: The new Dolphins logo replaces one of the last gloriously goofy NFL logos. There's still the Raiders logo that looks like a lumpy bartender dressed up as the Oakland Raiders logo, and that's great. But Bucco Bruce, the fabulously rakish/rakishly fabulous logo of the peaches-and-cream Tampa Bay Buccaneers is long gone, replaced by some off-brand pirate impersonator frankly better suited to welcome guests to a restaurant called "The Shrimp Heap" than to patrolling a NFL sideline or adorning an XXL Apex One windbreaker. I'm not even going to bring up Pat Patriot, because it's still kind of painful, although at least the Patriots had the good taste to replace him with a logo that looks sort of like John Kerry.

There was, thankfully, no actual helmeted dolphin mascot on the sidelines at Dolphins games. That would have been cruel, as dolphins are supposed to swim and play free, not watch Ryan Tannehill one-hop bubble screens. But there was a logo that was authentically goofy and unique, and had a bit of history behind it besides, and now there isn't. Some goofy-great graphic designer thought to put a helmet on a dolphin, which is not just a good/hilarious idea, but an admirably safety-first one. Now some brand manager doof has thought to take it off. There are, of course, more offensive things going on in the NFL, but it's tough to think of one right now.