Are GOP gay marriage supporters hurting the cause?

If conservative support of marriage equality is an attempt to further reinforce strict societal norms, no thank you 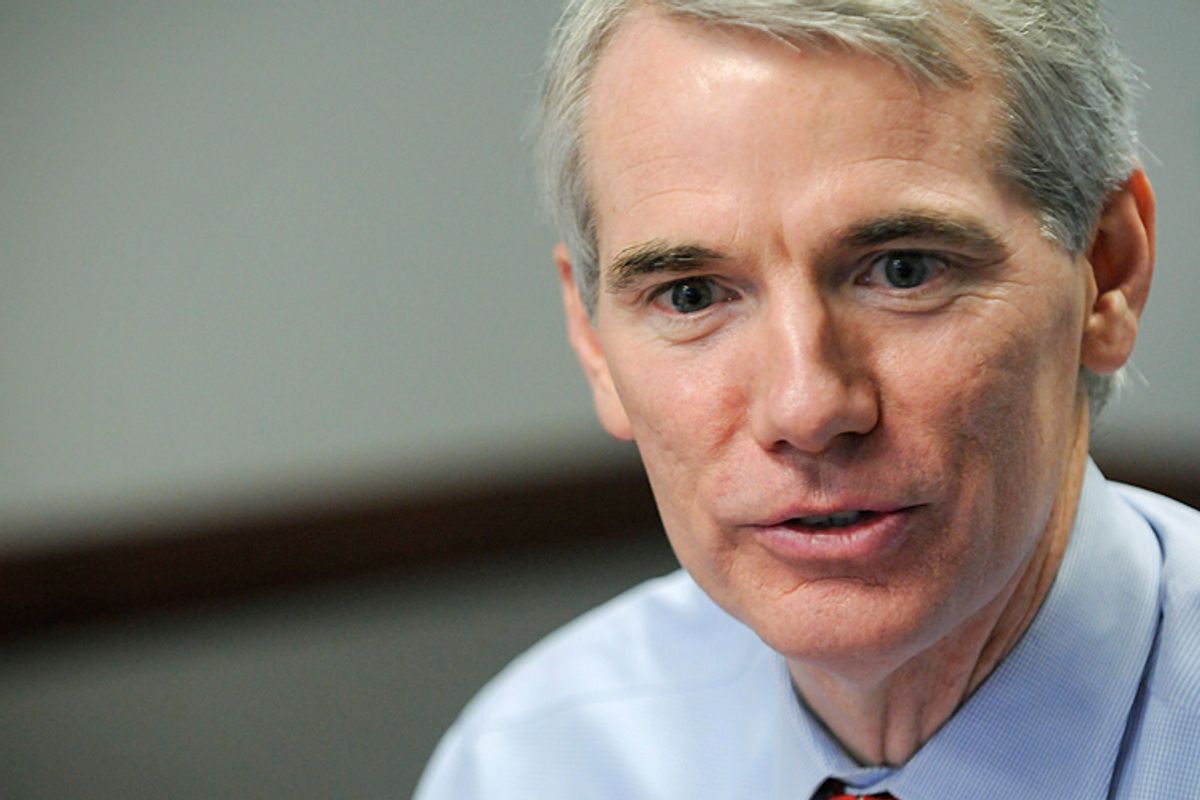 While I'm genuinely thrilled that more and more Republicans are coming out to support marriage equality, it's important to consider why that is -- because the ends may not justify the means. To the extent Republican support for gay marriage is based on imposing restrictive and regressive conservative social norms, it ultimately hurts gays — and all of us — more than it helps.

Sure, Republican Sen. Rob Portman announced his support for same-sex marriage because he wants equality for his own gay son, but Portman also rationalized his views within a conservative values framework. In an Op-Ed announcing his change of heart, Portman wrote that he supports allowing gay couples to marry because he is a conservative, not in spite of it:

We conservatives believe in personal liberty and minimal government interference in people’s lives. We also consider the family unit to be the fundamental building block of society. We should encourage people to make long-term commitments to each other and build families, so as to foster strong, stable communities and promote personal responsibility.

The very same day, conservative social “scientist” Charles Murray also made waves by declaring his support for marriage equality at the annual CPAC conference.  Murray cited personal relationships as his motivation, too, saying awkwardly, “We have acquired a number of gay and lesbian friends.”  But Murray’s reasoning was also laden with conservative morality — as when he noted that the gay folks he knows who have kids aren’t just responsible parents but “excruciatingly responsible parents.” More responsible than others, presumably.

This is the same Charles Murray who infamously claimed in "The Bell Curve" that wealth and achievement gaps between white and black Americans were due to differences in IQ.  And last year, Murray came out with a new book arguing that a growing “white lower class” has been caused by the destruction of marriage and family primarily at the hands of government and (black) single parents on welfare.

And at the pro-marriage panel organized on the fringe of the official CPAC agenda, conservative commentator Margaret Hoover spoke about the long-standing right to marry in clear terms of bias-laden moral judgment:

“If you are a prisoner, you are a murderer in jail, you have a fundamental right to get married,” she said. “But law-abiding, patriotic, gay Americans who want to commit their lives to each other and generate this stability and this economic prosperity can’t get married.”

The conservative moral argument for marriage is that marriage is good and good people get married and “law-abiding, patriotic, gay Americans” are good people.

In 2006, as a segment of gay rights organizations began the full-fledged push for marriage equality in America, another set of queer activists, joined by many straight people of color and feminist allies, voiced concern about making gay marriage a goal, let alone the centerpiece of the gay rights movement. Several prominent activists wrote and signed onto a statement called “Beyond Marriage.”  In effect, they argued in a perpetual us-versus-them political paradigm, the solution to the systematic “otherization” of the gay community could not be found in joining the ranks of privilege through marriage while reinforcing the continued exclusion of other families. They wrote, “Marriage is not the only worthy form of family or relationship, and it should not be legally and economically privileged above all others.”  These activists built on the radical traditions of the gay liberation movement — that the path to justice did not run through heteronormativity but through liberation for all.

Just as conservatives now acknowledge the fight to prevent gay marriage may be ending, the fight to prevent marriage as the central gay movement agenda ended some time ago. Those, myself included, who dreamed of a more imaginative gay rights movement — one rooted in transformation, not assimilation — could find encouragement sandwiched between the great intellectual scholarship of the past and the rising generation of more radical queer youth. In the meantime, we all fell in line with or were drowned out by the gay movement chorus calling for marriage rights.

Fine, but how we attain that goal — the moral rationales on which we rely, explicitly or tacitly — is as important if not more so, setting up the terms of debate for future struggles around justice and freedom.  In the interest of expediency and bringing as many unlikely conservative allies on board, the gay rights movement may give cover to or even amplify a set of narrow values that rank married families as better than unmarried families, two parents as better than one parent — norms that continue to divide America into good people and deserving families versus everyone else. And even if we temporarily succeed in getting gay folks added to the “good” category, is it worth it?  Plus do we really think that’s the way we or anyone else will be treated equally?

In his latest book, Charles Murray argued that America is “coming apart at the seams” because while the “virtuous” white upper class continues to value marriage and other traditional norms, they are failing to impose those norms on the rest of the country. This is not marriage as choice but compulsion, an extension of the “marriage promotion” agenda Republicans have forced into welfare reform and other programs. In an important 2008 report, Dr. Jean Hardisty and Political Research Associates revealed that the marriage promotion and pro-fatherhood movement is deeply rooted in right-wing networks and ideology and merely masquerades as (junk) science. This is not a cause with which the gay rights movement should in any way, shape or form link arms.

Marriage is great for all kinds of reasons. And Republicans' wanting to save their sclerotic party by jumping on the bandwagon of equality is great, too. And there are plenty of great reasons for conservatives to support gay marriage, like liberty and freedom of choice and the idea that individuals should decide what kind of families they form, not the government. Any of these reasons, and their proponents, should be welcomed by the marriage equality movement. But the judgmental moral hierarchy of conservative marriage supremacy should be looked at by all of us with a queer eye.