The Smashing Pumpkins frontman reveals his admiration for Alex Jones 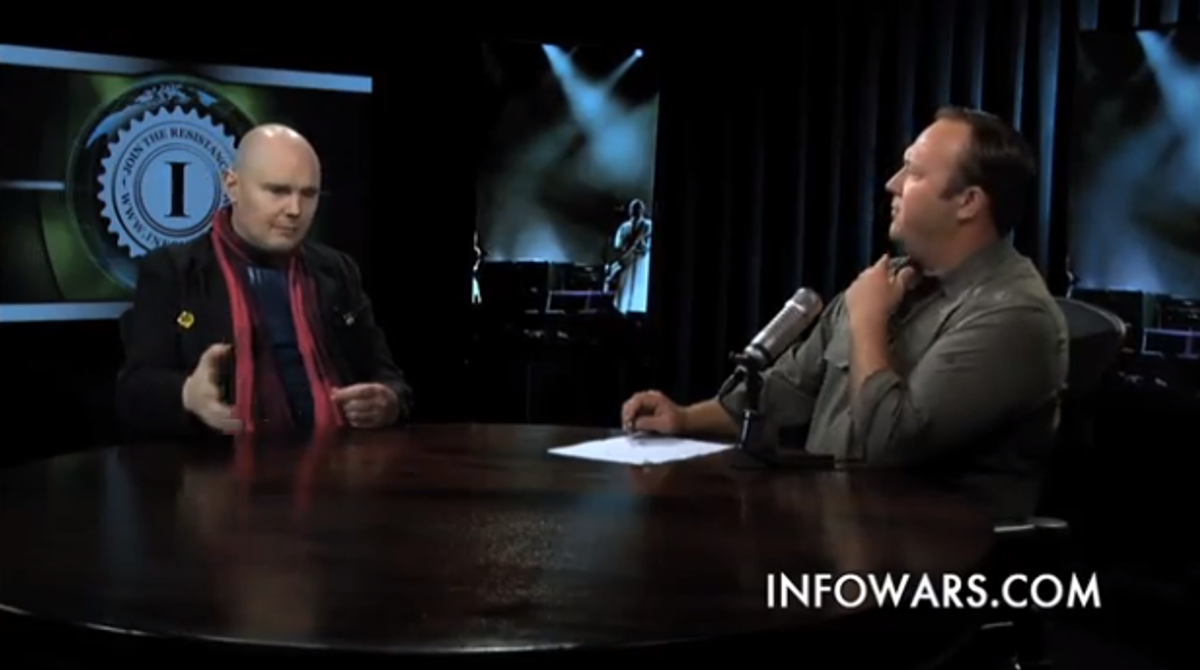 When Smashing Pumpkins frontman Billy Corgan is in Austin, Texas, he drops by the studios of America’s favorite conspiracy theorist, Alex Jones. Corgan, who says he first encountered Jones' work six or seven years ago, has done at least three lengthy interviews with the radio host in the past 12 months alone, including an hour-long sit-down on Friday.

In that appearance, Corgan praised Jones’ visionary work, but pressed him to get to the “next level” by adding a spiritual element to his narratives. “Infowars would benefit from a spiritual perspective, history has shown, whether it’s Gandhi or Martin Luther King or Jesus,” Corgan explained.

The musician added that Jones’ much-discussed interview with Piers Morgan in January was “the greatest ever” because it showed “you’ve broken the trance.” Jones said at the time that Corgan texted him immediately after the interview to write: “Alex you broke people’s hypnosis, you couldn’t have done a better job.”

On Friday, Corgan said he likes to meet up with Jones for dinner or for an interview whenever he’s in town, and said he’s even written a song based on the radio host’s works -- the 10-minute-long “United States” off his 2007 album “Zeitgeist.”

Corgan also praised Jones and other "citizen journalists" for presenting “stuff that doesn’t get played on the nightly news,” pointing to a recent video clip he saw of a testy exchange between Sens. Dianne Feinstein and Ted Cruz on gun control. “That’s the kind of thing you would never see!” (In fact, the clip was widely played on cable news and discussed in the mainstream press.)

Turning to popular culture, Corgan criticized television for becoming “very anti-family.” “Even if you don’t believe in single conspiracy in the world, if you just watch television like I have for the past 40 years, you’ve seen a very negative bias against families ... Men are emasculated on TV constantly,” he said.

“Where does that come from?" he continued "Is there somebody predictively programming that? Is there an agenda behind that? Those are all serious questions to ask.”

Throughout the discussion, he wove in references to "Star Wars," "The Matrix" and "1984." (Corgan's most recent album, "Oceania," borrows its name from the George Orwell classic.)

We tend to assume rock stars lean left, and while Corgan’s views are hard to pin down, they are certainly not traditionally liberal. In a previous interview from March of 2012, when Corgan was in town for South by Southwest, he told Jones his views are “not necessarily one side or the other." He questioned the “global warming/climate change narrative,” slammed “Obamacare,” and said he disagreed with the redistribution message of the Occupy movement.

“Everything I've earned in life, I've made myself. With songs that I wrote. So when somebody starts talking about how I have to give to somebody that didn't do that, that's a deeper conversation,” he said last year.

It's unclear if Corgan believes in Jones' conspiracy theories, though he does seem to agree with the radio host's worldview, at least abstractly, and referenced on Friday that there may be a globalist "cabal" working surreptitiously.

In his own interview with Piers Morgan in June of last year, Corgan said he’s not a big fan of President Obama. "That's where I'm disappointed in the president, is he ran on a moral compass agenda. But, what happened? I'm sure there's lots of good reasons, and I'm sure they'll roll somebody out to counter thoughts like that. But I don't see it," Corgan said.

In 2009, Corgan posted a message from Lyndon LaRouche on the Smashing Pumpkins website (the post has since been removed).

In June of 2012, Corgan called into the Jones show for a 45-minute interview. “Well, I think some of the roots start -- on this album -- start from the last album, in 2007, 'Zeitgeist,' which, you know, on some conscious or unconscious level, listening to you, and doing my own research on the Internet, kinda led me to a dark place where I felt, you know, what’s happening to my country?”

He credited Jones with helping him rise above the attacks from the “robot class,” so that he can be a leader outside “the system.”