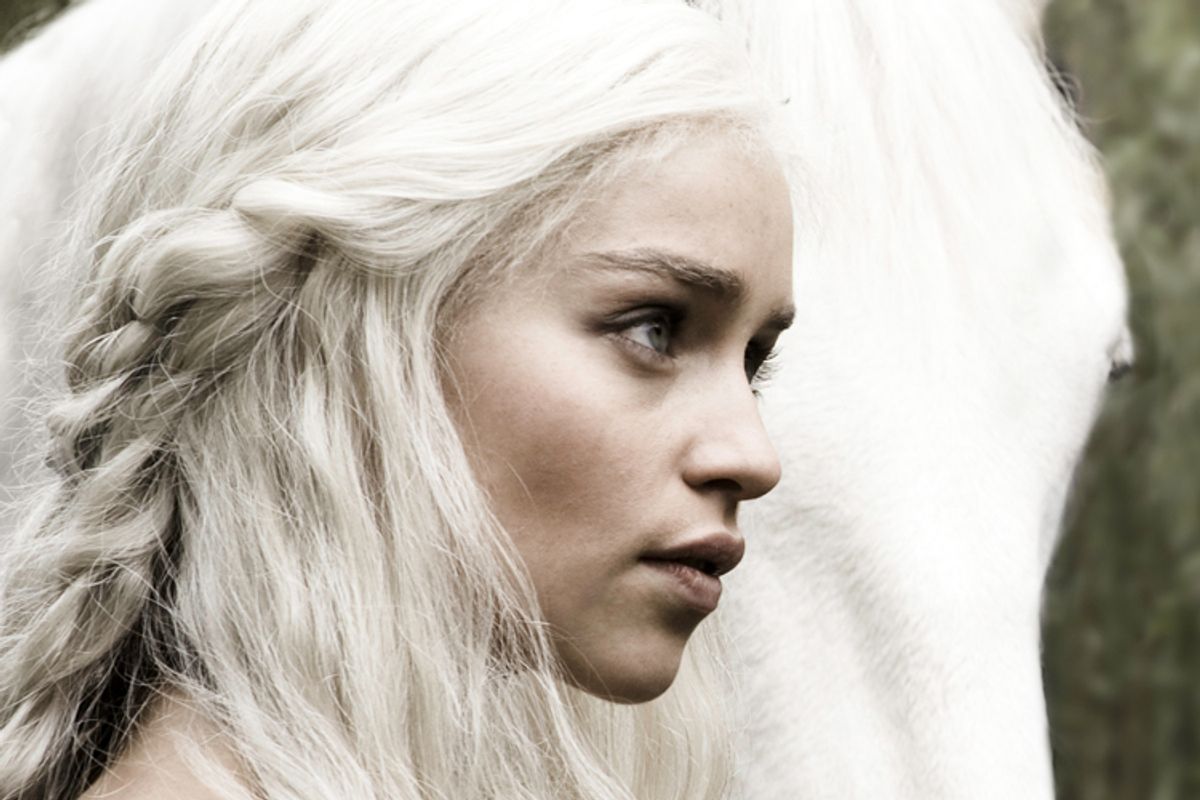 Perhaps the strength of a show's fan base can be measured in the fan fiction surrounding it.

Since the early days of the Internet, fans of existing properties have spun entirely new stories using characters that exist in someone else's produced work. And while alternately glum and grim adult dramas "Mad Men" and "Breaking Bad" languish on FanFiction.net with, respectively, 80 and 78 stories about them (and "Boardwalk Empire" has a mere 62), "Game of Thrones," which returns on HBO Sunday night, is booming. Six hundred and eight stories have been committed to FanFiction.net's pages -- including stories transplanting the characters to the present day and into a gay fantasia on George R. R. Martin's themes. To test the fantasy show's malleability -- and to see which "Game of Thrones" fan might be the next E.L. James, printing money from fan fiction -- we picked a few of our favorites.

The story: "A song of Ice and Walkers"

Synopsis: Jon Snow and Daenerys find themselves in the "Walking Dead" universe, where they fight off zombies.

Sample prose: "What time had they jumped into? Nothing felt the same as it did in Westeros, everyone here looked different. Life was different. Was this the past? Before the Seven Kingdoms? Was this the future? Or was all this happening at the same time just in a different realm?"

The verdict: 8/10 severed heads. There's crossover between the fandoms for Sunday night's two gruesome fantasies, and the author knew enough to use two of the most popular "Thrones" characters.

The story: "My Love"

Synopsis: A letter from Daenerys to her deceased husband.

Sample prose: "Your eyes, deep as wells, shining like suns / When I saw you, I wanted to have your lips against mine / My love, you were beautiful, you were brave, and you were strong / Without you, life feels wrong."

The verdict: 7/10 severed heads. Adds an extra dimension to the story -- and, hey, Daenerys doesn't seem like she's particularly good at rhyme schemes!

The story: "you bring the ice"

Sample prose: "I do not want to hurt you, Lady Swann," said Edward without replying to her statement. "But my body wants to hurt you. My black hands want to find their way around your throat and strangle you until you turn as blue as my eyes."

The verdict: 5/10 severed heads. The purple prose has more in common with Stephenie Meyer than George R. R. Martin.

The story: "Some Unholy Need"

Sample prose: "Garlan Tyrell is leaving Paddington Station when the shadows take him. Had he not been on the phone to his girlfriend, Leonette; had he been paying more attention; had he been less tired and restless from his journey, he might not have proved such an easy target."

The verdict: 6/10 severed heads. Not much to do with the present day, besides the fact that everyone has phones.

Synopsis: A fairly short story (still being told!) resetting the action of "Game of Thrones" to a hard-boiled noir.

Sample prose: "The large youth suddenly got almost comedically serious with his friend. 'Ned, if there's anything more important than these crab cakes, I want it caught, shot, and burned for blasphemy …' He stuffed his mouth midsentence, before he stopped and looked out at someone. 'Hey Lannister … get your narrow ass over here, you're not going to believe this, look.'"

The verdict: 9/10 severed heads. There is almost no plot, or connection to source material here, but that didn't stop E.L. James! The weird flourishes (crab cakes?) and the general imitation of James M. Cain carry the day.

The story: "A Doubt of Shadows"

Sample prose: "Catelyn stopped in front of the coffee vender and shoved four quarters in. She selected a nice iced coffee; Cat never was one for the hot stuff unless it was a particularly chilly day. The detective pulled the coffee out from the flap and took a sip. The delicious taste allowed her to ease her mind a bit off its continuously interrupted logical processes as she walked back to Bran's room."

The verdict: 4/10 severed heads. That's how long it takes her to order an iced coffee. It's among the high points of action here.

Synopsis: Some of the young and glamorous "Thrones" characters go to a nightclub together.

Sample prose: "Petyr finds Alayne bent on the sink when he comes out of the cubbicle he shared with Lysa. Harry already left and Lysa is regaining her breath. Alayne plounged a toothbrush in her throat deep enough to vomit. She now was whasing her pretty mounth. He watches her, running a protective hand up and down her back in a comforting gesture."

The verdict: 8/10 severed heads for effort and for telling a story with a beginning, middle and end -- even if we had no idea what was going on through most of it.

Sample prose: "'We can't go on like this. If Sam should tell anyone what he saw then it won't just be my head on the chopping block, it will be yours too, and if I can stop that happening then I'll do whatever is in my power.' And I'd give up forever to touch you ..."

The verdict: 5/10 severed heads. Dinged two points for inconsistency, as the story was "inspired by some of the songs of Avril Lavigne."

Synopsis: Two male "Thrones" characters, raised within the same family, end up having a fun, TV-MA weekend together!

Sample prose: Theon rolled his eyes. "I know, I know. 'To take no women and sire no children.' But there's nothing in there about men, is there? And with these long winter nights --" Another silence followed this, more nervous and less hostile than the last.

The verdict: 10/10 severed heads. Congratulations to this author on proving that any truly popular show will be the subject of fan fiction pairing two male characters together, preferably ones as close to "brothers" as possible to shatter multiple taboos at once.