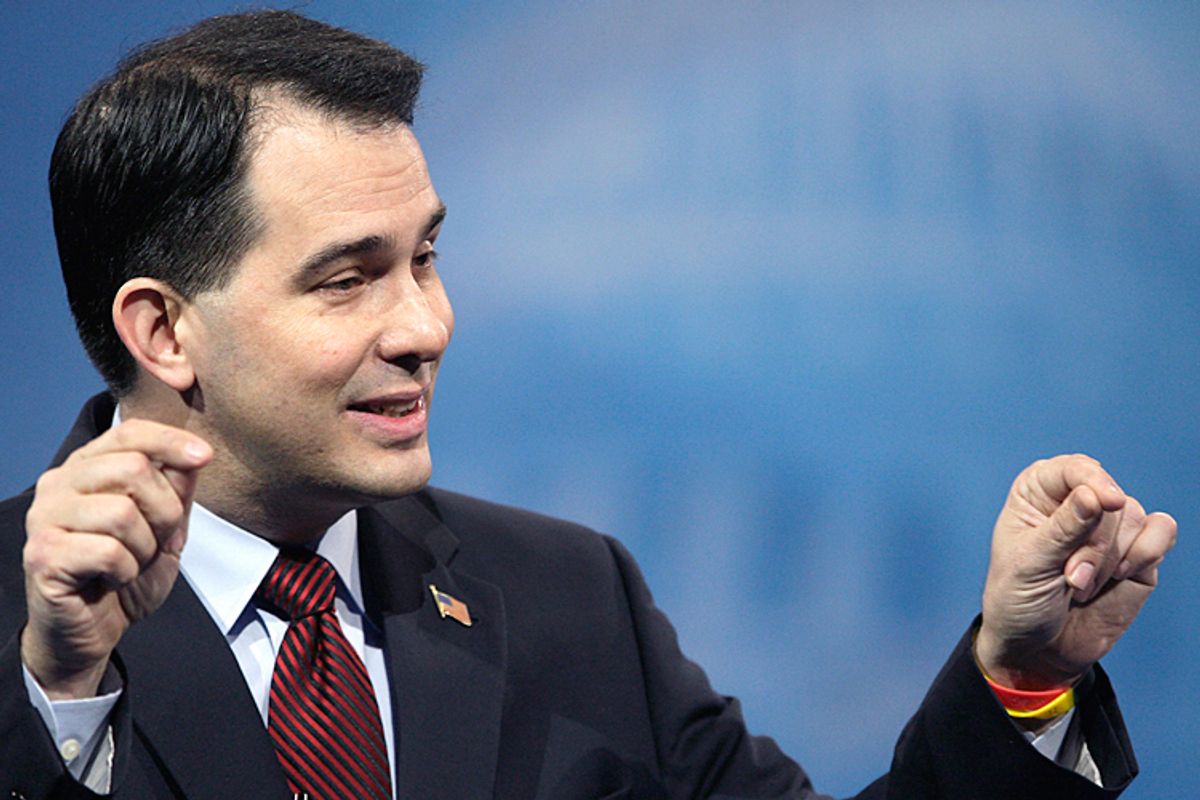 Looks like Wisconsin Gov. Scott Walker is going to try to be president now. Robert Costa reports that Walker is "collaborating on a book with Marc Thiessen, a former chief speechwriter for President George W. Bush." It's not like a sci-fi robot murder mystery that takes place in the distant future on Ganymede, either: It is an I would like to be president sort of book, "with stories about his family, his values, and his rise to power." It will probably be boring.

But just because it will be a boring book doesn't mean that its existence isn't interesting.

Thiessen is a very poor Washington Post opinion columnist who wrote a book in which he strung together a series of distortions in support of the thesis that torture is great. Before the book and the column gig, he was a speechwriter for George W. Bush and Donald Rumsfeld. (Before that, Thiessen spent six years as a spokesperson and "policy adviser" to unreconstructed white supremacist Sen. Jesse Helms, which is another thing that should effectively bar him from participating in civilized society.)

Thiessen likely got the job because he's written a bunch of columns lauding Walker as a leader at the forefront of the "GOP revolution." In 2012, he called for Romney to select Walker as his running mate, writing, "Barack Obama is afraid of Scott Walker." (Thiessen also wrote that a victory for Walker in his then-imminent recall election "would make Walker the instant front-runner for the GOP vice presidential nod." Walker won, and did not become a front-runner for the vice-presidential nod.)

The book is clearly more about national ambition than it is part of Walker's 2014 reelection campaign. He does not need help with name recognition in Wisconsin, and Thiessen has no connection to the state at all. Walker also just went to CPAC and plans to visit Iowa and give a speech to one of their thousands of random GOP groups this spring. He's a Midwestern governor, roughly half of his state approves of him, and the conservative activist base loves him. It would almost be stupid if he didn't give running for president a shot.

Walker's decision likely got a bit easier this month, when the three-year investigation into the unusual amount of illegal campaign activity carried out by some of his appointees and fundraisers concluded without Walker facing any charges or specific allegations of wrongdoing. Six individuals connected to Walker were charged with crimes. Two of his aides each separately looted a fund intended for a picnic for veterans and their families. Timothy Russell, who worked closely with Walker in various jobs for a decade, was sentenced to two years in prison.

Walker's repeated appointment of Russell to various positions suggests that a Walker administration would be, like the Bush administration, full of political hacks whose only qualifications for their posts will be either ideological certitude or fundraising ability. His hiring of Marc Thiessen is evidence that he has no strategic or moral issues with the Bush administration's foreign policy. For a party that's desperate to reform its image without changing a thing about its policies, he's as good a candidate as any. He just better make sure his book doesn't accidentally express any opinions about immigration reform.