Chris Brown's "apology song" to Rihanna: A brief history of the pair

As Brown records a song apologizing to the woman he beat in 2009, their path to discomfiting reconciliation 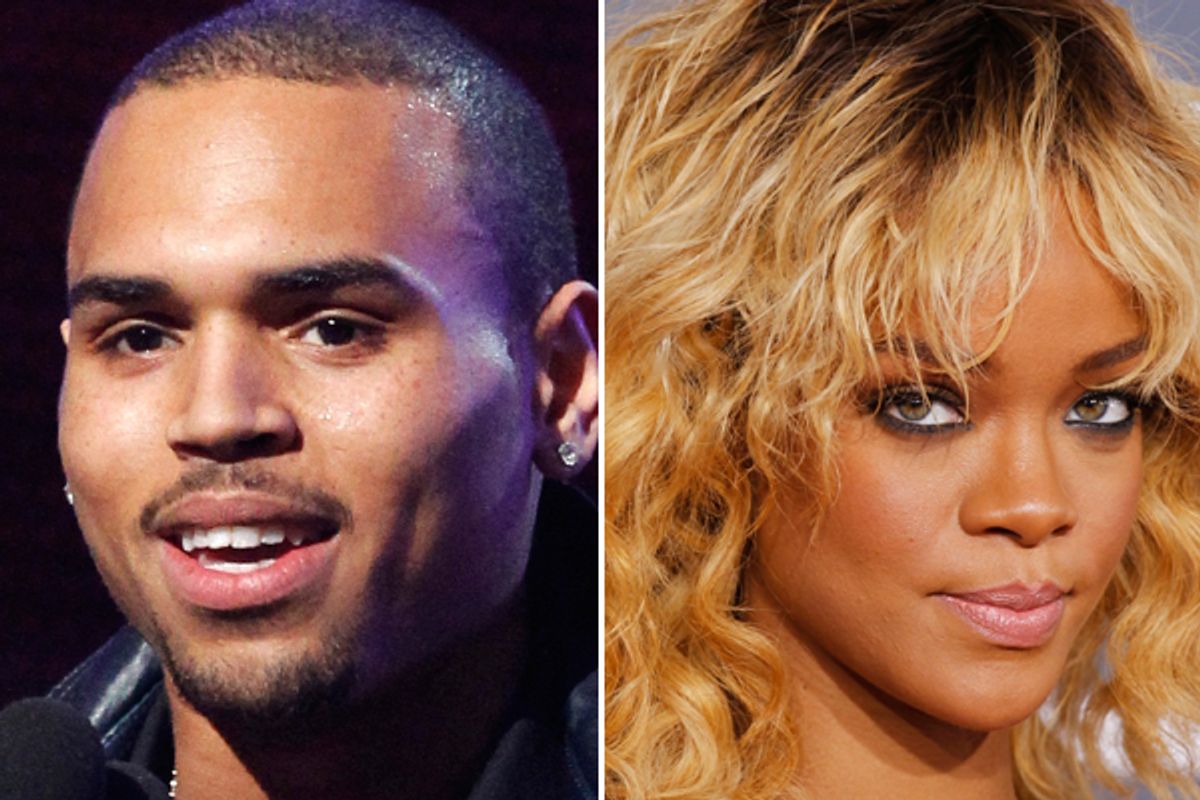 Chris Brown has apparently recorded an "apology song" to Rihanna. In the rapper Tyga's song "F--- for the Road," the R&B singer addresses an unnamed love interest: "I know I make mistakes, I know I f–ked up, but my heart beats for you, baby."

Brown is among the music industry's most popular and resilient stars -- and his public, at least, has largely forgiven him for his beating of Rihanna in February 2009. The pair has slowly circled one another in the intervening four years, as Brown's star has risen and as Rihanna has sent her fans mixed signals about her feelings about Brown. Herewith, a timeline of the pair's very public saga of abuse and squeamish forgiveness.

Chris Brown is arrested for beating Rihanna in a domestic violence incident in his car after a pre-Grammys party. Both artists canceled their appearances at the awards ceremony. A photograph of Rihanna's battered face surfaced online shortly thereafter. Other musicians cautiously avoid condemning Brown publicly, with T.I. (a Rihanna collaborator on the song "Live Your Life") saying of Brown, "I told him this too shall pass."

Rihanna and Chris Brown go on vacation together in Florida.

Reports emerge indicating that Rihanna and Chris Brown have broken up.

Brown pleads guilty but receives no prison time, sentenced instead to probation and community service. Judge Patricia Schnegg issues a restraining order and specifically directs Rihanna to avoid Brown. "The fact is that this essentially ends the criminal proceedings other than the sentencing," Rihanna's lawyer said at the time, "and since it was a fair and just resolution, it's better it ends this way, rather than go to trial."

Brown is sentenced to five years of probation and 1,400 hours of community service -- he had faced potential jail time.

Rihanna's album "Rated R," featuring dark lyrics about suicide and possibly non-consensual sex, goes on sale. The singer tells Diane Sawyer that Brown threatened to kill her but that he "was saying it to scare me." She also says her father had been abusive toward her mother.

Chris Brown's album "Graffiti" tanks at record stores, and the musician rants on Twitter that the music industry is trying to "blackball" him.

Rihanna tells W: "At first, I completely shut down. But now I feel like this happened to me so I could be a voice for young girls who are going through what I went through and don't know how to talk about it."

Brown releases a mixtape with a song called "Ain't Thinking About You," in which he declares he has no interest in Rihanna. The tape also features "Deuces," a tell-off to a girl that Brown calls "a vulture." The song goes on to be a hit.

Brown receives positive if not glowing press coverage after breaking down during a tribute to Michael Jackson at the BET Awards.

"Love the Way You Lie," a ballad about domestic abuse recorded by Eminem and Rihanna, hits No. 1 on the Billboard charts.

Brown's restraining order is lifted without objections from Rihanna's camp.

The music video for "We Found Love" depicts a drug-fueled, abusive relationship between Rihanna and a male model strongly resembling Brown.

Rihanna and Brown release two duets, including the sexually explicit "Birthday Cake" remix. An Elle interview conducted before the songs' release and published shortly after includes Rihanna's statement about her abuse: "That was my liberation, my moment of bring it. [...] Now you know that, so you can say what you want about it. I don't have anything to hide."

Rihanna's Instagram photo of a package of ricecakes dressed in sunglasses and earrings is widely interpreted as a racial slur against Brown's girlfriend Karrueche Tran, who is Asian.

Rihanna tells Oprah Winfrey, "We love each other and we probably always will" and that she feels compelled to maintain a "poker face" about Brown in public.

Rihanna and Brown are reportedly a couple once more, though both sides stay mum.

"Unapologetic," Rihanna's seventh album, is released, featuring songs including "Love Without Tragedy / Mother Mary," in which Rihanna calls herself Brown's "Marilyn Monroe," and "Nobody's Business," a duet with Brown in which both parties decry the media attention upon their romance.

Rihanna uses the cover of Rolling Stone to announce that she has reunited with Brown. "I decided it was more important for me to be happy," she says, "and I wasn't going to let anybody's opinion get in the way of that. Even if it's a mistake, it's my mistake." She appears in court for Brown's probation progress report hearing, at which it is called into question whether or not Brown completed his community service.

The two sit together at the Grammys, at which Rihanna performs the ballad "Stay," about trying to prolong a dysfunctional relationship. Brown declines to join an ovation for Frank Ocean, whom Brown and associates beat days before the ceremony.