The new talking point that liberals will turn USA into California misses one thing: California is friggin' awesome 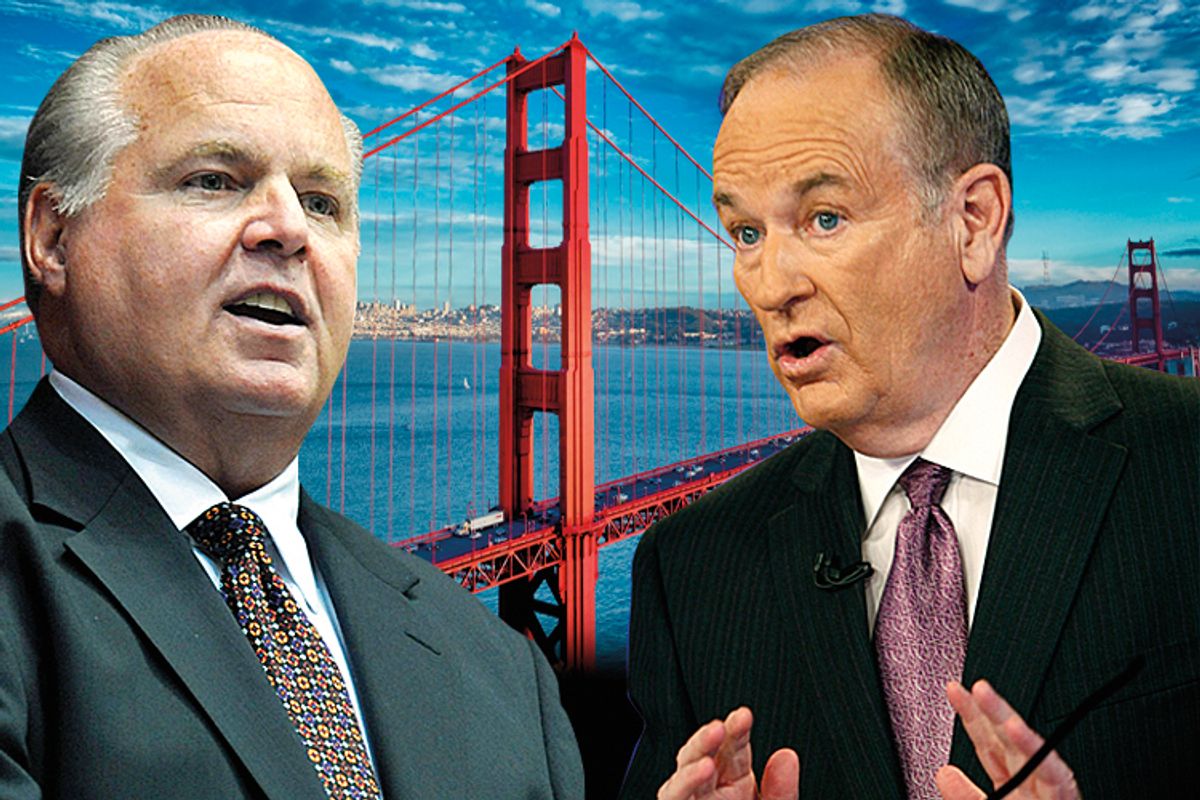 As a columnist, I receive email every day from readers across this great country. Not surprisingly, some of these letters are angry missives frothing with apocalyptic rhetoric and dire warnings. Of late, no matter the controversy of the day nor what specific issue I happen to be writing about, these particular screeds (often in response to liberal successes) have been repeating a singular message: liberals, progressives, socialists, communists, hippies and other alleged undesirables are trying to "turn America into California."

No doubt, you've probably caught this or a similar phrase in your Web surfing, your email box and your casual discussions. It is the conversation-ender du jour. Don't like the election results and the policies that follow? Deride them as proof America is "becoming California." Don't like a bill moving through your legislature? Cite it as more evidence your state is "turning into California." Don't like what Congress is doing on any given day? Write a screed bewailing America "turning into California."

As with most of the right's facile slogans that get repeated ad nauseam, this one isn't some representation of spontaneous grass-roots sentiment. It is instead a commodified product -- a prepackaged talking point carefully constructed by the conservative movement's media machine for maximum repetition among that movement's dittoheads.

The first thing to say in response to this is to say nothing at all, and instead just laugh. That's because if you've ever driven across America, you know that after three decades of conservative economic policies, vast swaths of the red-state heartland now look like a testing ground for neutron bombs, with crumbling buildings and faded billboards the haunting reminders of glory days long since passed. Yet, somehow, much of the vitriol aimed at California tends to come from this expanse, as if things are so much better in bumblefuck than they are in the Golden State.

That's why at one level the whole talking point is funny, and why there are few things more LMFAO-worthy than getting an email from someone in Craphole, USA, ripping on California. It's just absurd on its face -- especially because California isn't just some run-of-the-mill place that's merely not worse than lots of other places. On the contrary, compared to lots of locales, California is friggin' awesome.

Look, just face it: There's a reason why the song is "California Dreaming." It's the same reason tunes like "I Left My Heart in San Francisco" and "I Love L.A." became hits celebrating California, and songs like "Allentown" and "Atlantic City" only resonated because they lamented those non-California kinds of places. It's the same reason California is a bigger tourist destination than, say, Missouri (even with Branson!). And it's the same reason why when many people retire or strike it rich, more of them move to California than to Nebraska. That unifying reason should be obvious: California, rightfully, has been -- and remains -- synonymous with awesomeness.

I won't bore you with a recounting of all the inherent reasons California is so awesome: Let's just stipulate that even the most devoted California haters can probably acknowledge stuff like terrific weather, vast coastline, towering mountains, beautiful rivers, world-class food and rich cultural diversity. But even if you (somehow) want to ignore all of that and just focus on California as a human project -- that is, its economy, its culture, etc. -- it still in totality adds up to "awesome" in comparison to so many other places.

First, the dollars and cents: California's economy is so dynamic, diversified and powerful that if the state were its own country, it would represent the 9th largest economy not in the U.S., but on the planet Earth. Even more incredible, the Golden State has achieved this standing despite the fact that, on balance, the federal tax code drains money out of the state, forcing it to subsidize its red-state haters (related side note: ever notice that conservatives bewail California's state government for overspending, but omit the fact that the state might have to spend more because the federal tax code forces it to send so much money to politically conservative states?).

In recent years, conservatives have singled out California's economic woes and budget deficit as proof that the state is becoming Greece. The domino-theory logic follows that if America "becomes California," America will then become Greece, too.

In this, conservatives expected us to forget that most states faced economic problems and massive deficits during the recession. Likewise, they now ask us to ignore two other inconvenient facts: 1) California's economy has grown faster than the national economy and 2) thanks to a liberal tax initiative and policies by the Democratic governor and Legislature, the state now sports a projected $2.5 billion budget surplus.

Nobody, of course, would argue that California is a utopia with zero problems. Like other places, it has serious issues -- and depending on which method you use to analyze data, it clearly does rank poorly in some critical areas. That said, when it comes to many of the policy areas California critics home in on, comparative context is key.

Yes, California's severe economic stratification is a problem, but then, so is America's as a whole. On top of that, if you are a conservative purporting to have a problem with this economic inequality in California, then where's your outrage at the even more intense economic inequality in Arizona -- aka conservatives' much-vaunted poster child for everything that's supposedly great?

Yes, California has relatively high unemployment, but that unemployment rate is the lowest it's been since the recession thanks to the state now being one of the fastest job creators in the country (and imagine how much lower its unemployment rate might be if the federal tax code stopped forcing it to subsidize red states).

Yes, California has recently enacted draconian tuition hikes for its public university system, but as the Los Angeles Times notes, "even with steep hikes, the Cal State system's tuition and fees total $6,521, still below the $7,186 national average for similar master's degree campuses." Additionally, the state's public higher education system isn't any old public higher education system; it is one of the few public systems that, in terms of academics and research, has branches that are on par with much higher-priced private Ivy League institutions.

Yes, California does have comparatively high housing prices, but while that's certainly a problem, it is a problem that in one sense actually reflects the awesomeness of the state. Indeed, housing prices are high because the state's awesomeness means so many people want to live there, thus driving real estate prices ever higher (and by the way, so many think California is so exceedingly awesome that even those prices haven't prevented the state from growing its population).

In light of all this, it is obvious why conservative movement leaders want to make California into a boogeyman. Put simply, the state is an imperfect but nonetheless shining success story of liberal politics and policy. Therefore, the right aims to slander it in order to prevent the state's success from undermining conservatives' sacred mythology about how to create a better America.

Less obvious -- but equally important -- is why, in light of California's comparative successes, the anti-California propaganda nonetheless has any audience at all. And it does seem to have at least some modicum of an audience. As Public Policy Polling confirmed last year, more national survey respondents tell pollsters they have an unfavorable view of California than say they have a positive view of the state.

As a non-Californian (happily!) living in the non-coastal heartland, I agree with California political consultant Roger Salazar who told the San Francisco Chronicle that the numbers don't express what they seem to and that at least part of the negative sentiment is about jealousy. Basically, at least some of those saying they hate California are likely saying it in the way an angst-ridden high school dude says he hates the gorgeous girl he's actually pining for but can't get. And guess what? When right-wingers tell this covetous subgroup to hate California, that's comforting in the same pathetic way it is when that high school dude's friends tell him he's better than the girl and that she doesn't deserve him anyway.

Another part of the animus toward California must be misdirected anger toward so-called Liberal Hollywood (so-called because while many individual actors and writers may be left leaning, Hollywood as an industry is anything but liberal).

But jealousy and Hollywood bashing is not the whole story. The other equally significant reason California is a boogeyman to hardcore conservatives is because it represents a triple whammy: it is at once a liberal state, a majority-minority state and America's most diverse state. And if there's anything America's bigoted conservative base fears and hates, it is politically empowered liberal people of color and a diverse America becoming a majority-minority nation.

In practice, that means the word "California" has different connotations for different audiences.

For most of us, it is a word describing an actual geographic place and political jurisdiction that we can concretely judge with aforementioned data. But when conservative politicians and media icons invoke California, many aren't only referring to that place or that data. Some are also deliberately -- if deviously -- sounding a racist dog whistle aimed at riling up right-wing fears of a non-white and more left-leaning cultural invasion in general, and of Democratic-voting Latinos in particular. Put into electoral terms, in warning conservatives that America is "becoming California" or "turning into California," that dog whistle is really trying to scare Americans about their country now being a nation whose politics and culture are no longer that of Mitt Romney's conservative and white-male-dominated coalition, but that of the far more liberal and diverse Obama coalition.

In the short run, the California talking points will continue, and they may seem momentarily trenchant. But remember: There are long-term strategic risks for conservatives as they continue to try to turn California into a political effigy.

First and foremost, there are lots of Americans who simply like or love California. These are the people who, if they aren't among the millions who visit or vacation there, continue to equate California with endless opportunity and the American Dream (an equation, by the way, that is deeply embedded in this nation's culture).

Additionally, even among many of the self-described California haters, many whose animus is motivated by juvenile jealousy (or Hollywood hating) still in their heart of hearts know California is awesome. After all, that's why they are jealous. And so when conservatives tell them that liberals are California-izing America, that may not strike this subgroup as such an awful thing; it may, in fact, boomerang against conservatives in unforeseen ways.

That leaves the hardcore racists. They will go on loving the California bashing, which all but guarantees some sort of anti-California cottage industry for years to come. However, in an America whose demographics are looking more California-like by the day, those folks are fast losing their political agency. In their place is a growing majority that knows California is hardly perfect, but also knows that compared to the alternative, a California-esque future for America holds the promise of greatness.