A tip for right-wingers angry about charges of racial bias: Try treating the Obama daughters with decency 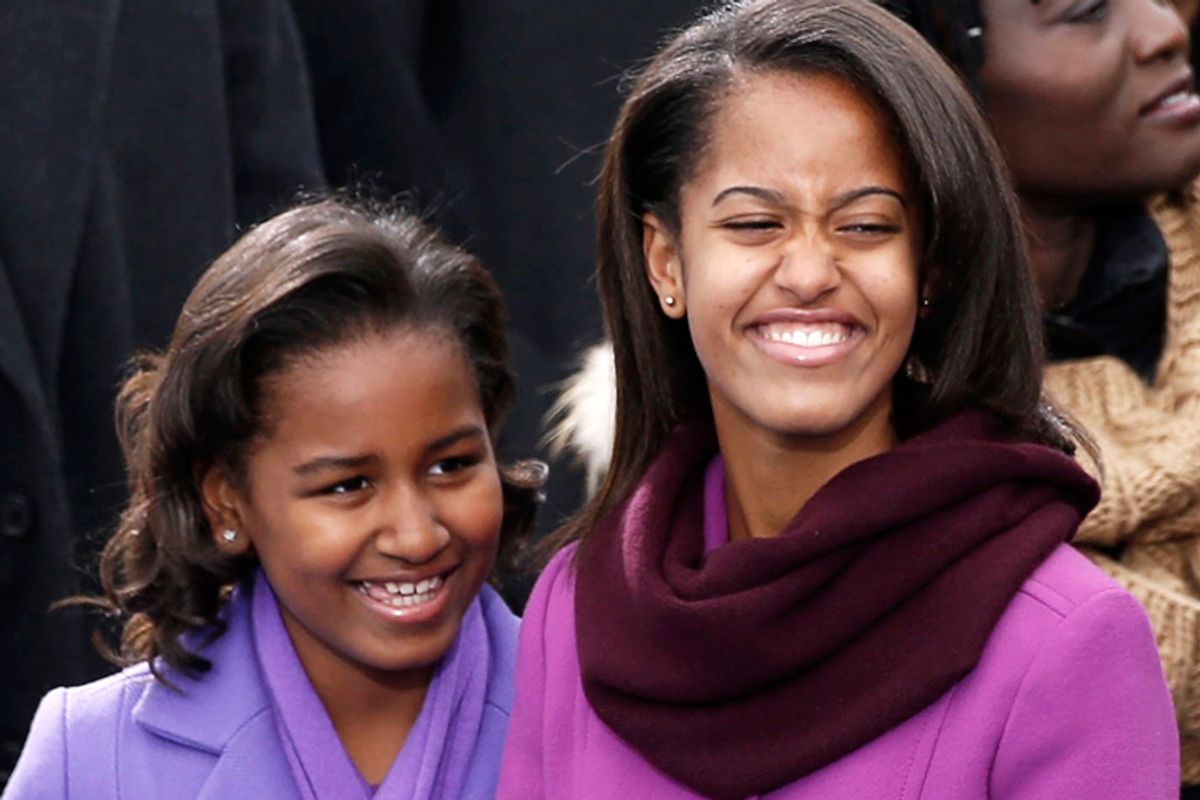 Writing my piece on Andrew Breitbart and Tucker Carlson, I missed a huge example of overlap between their two sham-empires: the reporter who broke the Caller’s now-disgraced “scoop” about Sen. Robert Menendez patronizing prostitutes, Matthew Boyle, now works for Breitbart.com. And on Monday he penned the ridiculous story revealing the location of Malia and Sasha’s spring break vacation (which is now at the top of the Drudge Report).

On Twitter Monday and Tuesday, Breitbart fans attacked my focus on their hero’s bizarre racially driven crusades. They continue to insist that they’re being unfairly tarred with the charge of racism, when they’re the real “post-racialists” who just don’t like Barack Obama because he’s a liberal. I have some advice for right-wingers who don’t want it to seem like their anti-Obama animus is racial: Try treating his daughters with respect.

You’ll remember back in December, the NRA went after Sasha and Malia with an ad insisting that the fact that they have armed protection, when the administration was supposedly blocking armed security at America’s schools (actually, it wasn’t), was the height of hypocrisy – ignoring the many threats to their safety faced by the children of presidents and the tradition of Secret Service protection, for all of them.

The Weekly Standard’s Daniel Halper went even crazier, with a piece alleging that the girls’ school, Sidwell Friends, a Quaker school, had armed guards, too. Anyone familiar with the Quaker tradition of nonviolence found that claim strange, and of course, like most claims about the Obama family that come from the right, it turned out not to be true.

Unfortunately for the untalented Mr. Boyle, journalists have a consensus about not revealing the location of the presidents’ children’s vacations. Reporters don’t write about minor first children except when they’re attending "official or semi-official events." It’s considered a security risk. As the Washington Post’s Paul Farhi reported last year:

The ban on such coverage has existed through many administrations by informal agreement with the White House Correspondents’ Association, which represents the interests of journalists who cover the president.

“There’s a general feeling among the press corps that it wants to be respectful” of the president’s children, said Caren Bohan, the White House reporter for Reuters who is president of the WHCA.

When Agence-France Presse wrote about Malia’s trip to Mexico last year, a few U.S. outlets picked it up, and the administration tried to get the details removed. Then an earthquake in Mexico made the first daughter’s vacation newsworthy, and other sites, justifiably, reported it.

A year later, along comes the brave Matthew Boyle, fresh off his Menendez humiliation, to tell Breitbart readers about the Obama girls’ vacation. The news hook seems to be that it’s a waste of money.

“It is unclear how long the first daughters will be staying in the Bahamas, or what the cost will be to taxpayers,” Boyle harrumphs. “Earlier this month, the White House canceled public tours as a result of the recent budget sequester, citing Secret Service staffing costs.”

Esquire’s Charlie Pierce put it better than I can:

What possible interest does this serve, except to titillate the dark and envious nether parts of Boyle's 22 readers? (No link, because fk that pudgy little monster.) There is no possible news value to this. Sooner or later, the frolicks of what my pal [Eric] Boehlert calls the "rightwing entertainment complex" are going to get someone killed.

The theme of most right-wing stories on Sasha, Malia and Michelle Obama's vacations and leisure-time activities seems to be that they're entitled princesses, when they do exactly the same kinds of things other presidents' families have done throughout history. There's only one difference I can see.

Drudge is also hyping the president’s vacation with the blaring headline “A vacation a month.” That’s another racially tinged trope on the right, that our first black president seems to be a little, well, lazy, because he can’t stop taking vacations. Of course, Obama is on track to take about a fifth of the vacation days George W. Bush did over his two terms. Obama took 131 vacation days in his first term – which would amount to 262 if he kept that pace in his second term. Bush took a staggering 1,060 vacation days over eight years, by far the most vacation in history (he also took the longest single presidential vacation in the modern era, a full five weeks.) Can someone explain why Obama is supposedly the vacation-hog?

Oh, and the comments on Boyle’s Breitbart.com story are pretty awesome, too. Here’s a good one:

They will indeed grow up to be monsters. Very, very, angry and vengeful monsters. Just like momma…
Especially after they are forced to visit their obamination of a father in a federal penitentiary following his impeachment and conviction for Treason…
Although I’d far prefer they visit his plot occasionally following his hanging for treason.

Boyle is perfect for his new employer (although he was a pretty good fit for the Daily Caller, too). In a post explaining why he jumped ship (which didn’t mention the higher salary he got), he bragged about “enlisting in Andrew Breitbart’s army … I’m shipping out today. It’s time to go to war.”

A war on the president’s daughters? Boyle ought to talk to some veterans of actual war. What a putz.

Paul Farhi’s story on the media’s traditional treatment of first children quoted Democratic pollster Celinda Lake on the political appeal of Obama’s family: “The value of the family is enormous. The more you know this family and the more you think of Barack Obama in these terms, the harder it is to vilify him.”

That’s true for the vast majority of Americans. But not the haters and racists who belong to Breitbart’s “army.”