As Cara fought drug addiction, I tried to help. But she slipped into darkness, and I was left without my other half 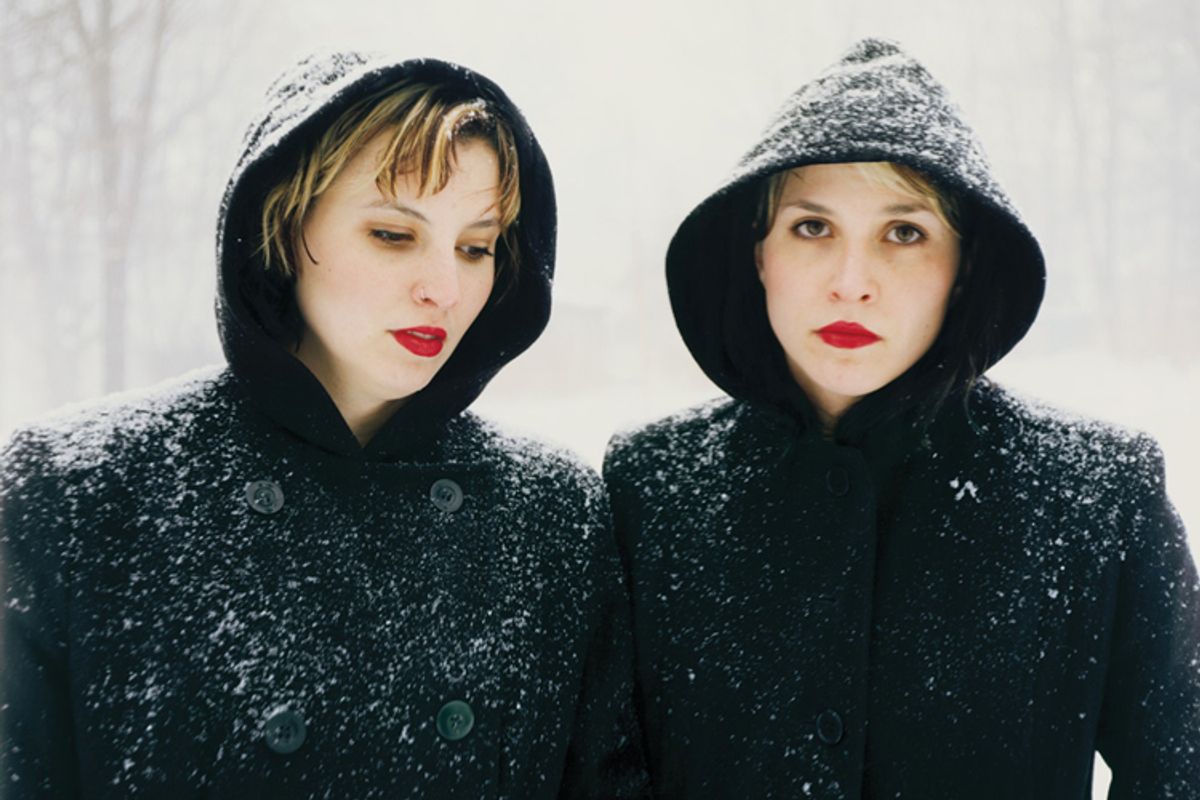 A photo of the author, right, with her twin sister, Cara.
--

In October 2001, something terrible happened to my twin sister, Cara. A capstone to some bad things in our lives that had gone before. That October, my sister was raped in the woods while she was out walking her dog. One of the consequences of the rape was that she was afraid to be alone. She needed me with her all the time. She asked if I would stay with her in Massachusetts, though she knew I had photography classes to attend in New York City. In my graduate studies, my only assignment was to photograph, which made it relatively simple to accommodate Cara. I selected her as my subject.

Cara refused to dress, so I made adjustments for the pictures that allowed for this. We wore identical long black cloaks. Cara buttoned hers over her nightshirt and pants, painted red lipstick on her mouth, pinked her cheeks. I copied her makeup, became her duplicate. We looked like old-fashioned harlots wearing long blank faces, in our long black coats. It was the middle of a harsh winter. I had a vision: identicals in the snow. I used the doppelgänger in the literary Gothic sense: landscapes were to describe the psychological state of the characters of our novel. It was easier for me to think of us as characters than to grapple with the truth of our new reality. I wanted Poe’s warring sisters, forever lost, women written with hysterical vapor. I wanted the fraction of history we owned.

We trekked over fields covered by feet of snow, so frozen on top that our feet didn’t break through the crust. We drove together on Sunday afternoons and looked for bleak ruined landscapes, bickering. Sometimes Cara didn’t want to have her picture taken. She’d beg not to go out—there were always reasons: She’d had a nightmare and hadn’t slept well. The zit blazing red on her chin was a crusty eyesore. She was waiting for an important phone call. It seemed to me that there was really ever only one reason: Cara was jealous that I still had the mind to work and she didn’t. If she couldn’t work, neither should I.

“The time we use to take your pictures, I could be writing.” Cara would pace her living room as I packed a camera bag, my signal that I was ready to go. “Has it even crossed your mind that I work, too?” This argument happened nearly every time we planned to photograph. She’d wait to speak up until she was fully outfitted in her coat and lipstick.

“You haven’t written a word in months,” I’d argue back, dressed exactly as she was. We looked like Victorian misfits sounding off, spitfires. “You have nothing but free time and waste it trolling the Internet.” This line of interrogation usually brought on tears for both of us.

“What do you even know about me anymore?” she asked. She was right. I didn’t recognize her. I felt like a woman stumbling through a pitch-black room looking for a hidden light switch. “I can’t stay here with you unless you let me take your picture,” I said, scaring her that I’d really leave. “I’ll fail school.”

I contacted her therapist to ask whether taking part in the photography project was a good idea for Cara. Her therapist never answered my calls. I know it’s against doctor-patient confidentiality for a doctor to discuss ongoing treatment without patient consent, but I tried nonetheless. Cara wouldn’t agree to allow me to talk to Dr. Ferrini. She feared we’d compare notes and catch her overmedicating with anti-anxiety prescriptions.

But there were other drugs as well. Cara’s right forearm was marked with an iris. Its rich purple petals became the target for the puncture of heroin-filled needles. Her left arm she’d drawn up with a tulip. Tulips had been our grandmother Josephine’s favorite flower, and the tattoo was meant to pay tribute. Near the end of her life, Cara had run out of good veins. Her tulip’s soft petals became blighted with track marks. Both of her flowers were drained of ink, which was slowly replaced by scars. Cara had begun her own memoir. No one can finish it. I can take pieces, like she took pieces of me. I searched the files on her computer and found poems, recollections of our youth, and the short prose pieces she wrote to accompany my photographs. With my findings, I’ve patched together our tale.

Once upon a time we were one snake, with one head, one body and two sharp teeth. Once you cut a snake in half it grows another head. Once it grows another head, it heals, becomes two snakes. Once upon a time there was only one of us. When your body is a mirror, there is no word for individual. Is there one word for two snakes? Twin. Snakes shed their skin. Once I was tough. I had all of our sharp teeth and all of the scales.

“I have always wanted a twin.” People say that. People want someone just like them, who thinks like they think and who will understand them even when they don’t understand themselves. People think having a twin means never being lonely.

Nothing is lonelier than being separated.

“We are lucky,” we answer back. But we are not. We are worried. “Cut yourself in half,” we tell people. “See how that feels and you will stop wanting a twin.”

People ask questions. “Do you know what the other is thinking? Do you have ESP? Do you dream the same dreams when you sleep?” I answer yes. I say, “I think what she thinks.” It’s easier than telling the truth. Now we are conflicting languages, snake-spit Babel. Sister explains me with her camera. I tell on her with my words, and I also tell on myself.

Certainly we’d talked about what we’d do if one of us died before the other. The answer was always suicide and our plans were the plots of girls who never suspected they’d really lose the other. We’d schemed since grade school about how we’d seal our pact: in the case of illness we’d hold a bedside vigil and ingest a dose of cyanide. In the case of an accident, the injured twin was not allowed to die until she stumbled to a pay phone and called the other. The unharmed twin would take her life by whatever means she possessed: Drano, phone cord, knife, swan dive from a cliff.

Instead, after my sister died, I spent years in the shroud of her white tattered scarf from Nepal; I wore her wedding rings and her favorite dresses. I slept in them until they tore. So be it. I love her, like I love no one else. I am in love with Cara. If I couldn’t die with her, I could write my sister back to life.