No, George W. Bush's paintings tell us nothing about Iraq

We want to understand W.'s presidency through his art. But there's no greater meaning under his eerie ineptitude 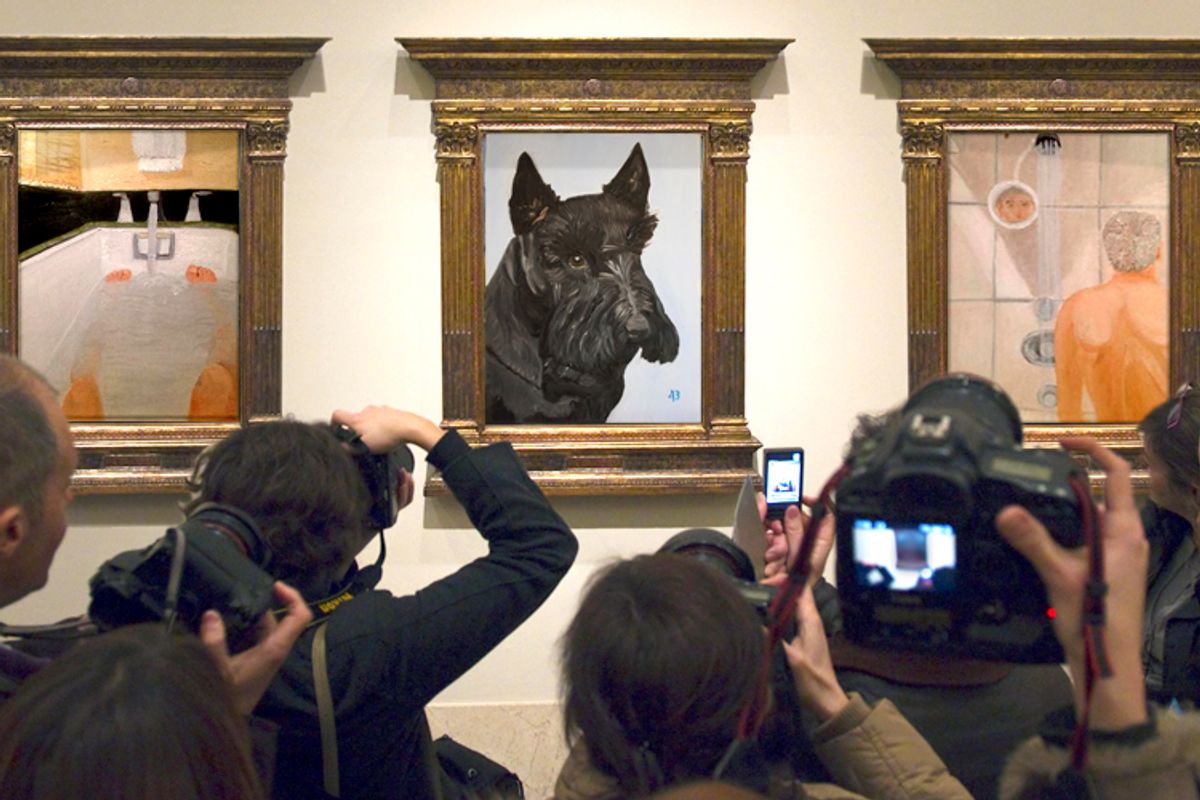 Correction: This article originally attributed a critique of the Bush paintings to Philip Kennicott which was actually made by Greg Allen

"When I get to heaven I mean to spend a considerable portion of my first million years in painting, and so get to the bottom of the subject."
-- Winston Churchill

George W. Bush's art teacher believes in his passion. “His whole heart was in it,” said Bonnie Flood, a Georgia-based artist who reportedly spent one month -- six hours a day -- teaching the former president to paint.

But what exactly was Bush's heart in? The preening assertion by his once and former mentor that he will “[go] down in history as a great painter,” if not a great president, is plain flattery. Talent isn't at issue here. Divine or profane, his is painting on faith: direct, observational subject matter — dogs, cats, fruit, sunsets, and himself in the bathroom — imbued with an otherworldly ambiguity through the botched certainty of its execution.

The two dozen (as of this writing) known George W. Bush paintings evince the same raw inspiration that guided him as president. It's safe to assume (if a little generous) that he tried his best to be forthcoming in this case — that is, realistic. Still, it's tempting to perform an autopsy, to psychologize or to apprehend the born-again artist through his art, as if under his eerie ineptitude lie concrete facts: physical absolutes and discernible mental states. Many have taken a stab, from prominent critics to endless bloggers to an actual art therapist. Yet the hidden messages scrawled across these canvases signed “43” continue to elude us. The paintings, it turns out, offer nothing more than their own self-evident reality — but this time we're the wiretappers. The first painting depicted the Bush's dog Barney and was made public in February 2013 by the family in an obituary for the Scottish terrier Barney. The other 23 examples, however, were forced onto the Internet after a hacker called Guccifer pilfered the Bush family's personal email (then watermarked the images with what appears to be an MS Paint spray can tool). First came the notorious pair of self-portraits bathing; most recently a choice group of still-lifes and animals surfaced; and there are rumored to be more, including at least 50 dogs total.

But by now it's clear: If big-A Art is a conversation carried out through aesthetics, then Bush's paintings don't qualify. They're closer to folk art, or outsider art, but are more accurately considered Sunday paintings — works of belief, not reason. This sort of self-expression passes between friends and relatives, or fellow painters (indeed, many of the hacked emails were addressed to W.'s sister Dorothy, who is purported to also tickle the canvas) — and is certainly not intended for public discussion. Indeed, it's the hack that makes the G.W. Bush works all the more sincere — and therefore, ostensibly, genuinely revealing. The implication is that, while Bush may have lied about, say, the existence of weapons of mass destruction in Iraq, these paintings are as real as it gets. His brush has made a pure gesture, a modest appearance, as if exclaiming: I yet live! I paint!

To be clear: What we're talking about when we say “George W. Bush's Paintings” is actually a number of jpegs — cropped from badly lit and less than orthogonal digital snapshots, often showing unfinished paintings clamped into easels, sometimes Photoshopped into chintzy frames, always already reposted. Given the fuzziness of the reproductions, it's difficult to actually analyze his brushwork, for instance, or to probe too deeply his manipulation of light and shadow. Still, people have tried. Not that this would be medically sound psychology under the best of circumstances. The response to these paintings, though — the constant online babble, the overflowing comment threads on reblog after reblog — is something else entirely. Within hours of when the first three photos were leaked to a bloodthirsty public, “actual” art critic Jerry Saltz had logged his praise. He begged Bush to keep painting and promised to review his first show. Other writers and bloggers followed suit, or offered their own interpretations, or dismissed the whole thing as pointless; yet all of this was characterized by a kind of partisan, moral speculation, carried out by proxy in the foreign land of art.

The bathroom paintings, for example, ooze guilt. They're all about cleansing, à la Lady Macbeth; or they're full of remorse for everything from Katrina to waterboarding. One blogger imagined Bush in there alone with his God: a confessional shower scene. The perspective here, too — so cleverly delineated by a twitching grid of brown grout — reveals an attempt by Bush to apprehend the world via the limits of his body. According to Gawker's Greg Allen, the long stare in the mirror, the long legs in that long bath, that pair of lonely eyes “now find themselves in the reality-based community and are trying to make their way in it.” Certainly, the composition in these thin little studies is something you can discuss with confidence. Like — that pair of reclining canines hugging the sides of the canvas. There's tension, despite simplicity. The subject matter matters little, or not at all — in the tradition of Sunday painters. Animals, vegetables and minerals dissolve into anxious lumps. One still-life describes a head cheese and a dinner roll, wrenched from their normal spatial relationship until roughly swapped in size. But wait. How many wars did Bush start? Is the roll Iraq? The head cheese Afghanistan? Supposedly they are both, in fact, shells. But consider the watermelon (America?), impaled or rolling off the sharp break of a table, thrown into irreality by the artist's grip on shifty perspective. Elsewhere, the lone dog on a shadowy cyan ground is perhaps Bush himself, drifting out to sea, bobbing on a painterly oceanic ...

Perhaps. It's sure hard to resist a few aesthetic dirty moves, now that our 43rd president has been dropped against his will into a metaphorical cage match. To many, they're not just weird, or strangely alluring; the paintings depict a psychopathology or outright idiocy, reveal a failure to grasp reality— and though disarmingly human, given the political power entrusted to the artist, are also frightening. We seemingly witness G.W. Bush again in the midst of forces he does not comprehend — once government, now art. One thing is for sure, though — assuming the detailed glass shower stall and chrome brackets aren't embellishments: Bush has a fancy bathroom. They're weird paintings. But we're talking about the Bush paintings, though, because we're talking about the Bush paintings; because everyone is talking about the Bush paintings; because George W. Bush painted the George W. Bush paintings. The conversation we're having is the trial of 43: the man, the angel, the demon, the painter — a conversation we apparently still need to have, as a nation and as an aesthetic public. Unfortunate, then, that we've slipped so comfortably into a conservative understanding of art, parsing right and wrong and good and bad, reverse-engineering biography, to the point where we think perhaps these paintings, of all that hacked data, of all the emails and addresses and family photos, make the deepest cut into the mind of George W. — and thus into that paradigm-shifting, decade-defining presidency. If only we could know the truth. If only painting could provide such revelations. If only, if only —

The bathroom portraits have elicited comparisons to everyone from Kahlo's What I Saw in the Water to Rubens' Venus in Front of the Mirror — but neat formal echoes do not count as conversation. Bush's oeuvre comes closer to the works at Boston's Museum of Bad Art, or Jim Shaw's collection of thrift store paintings — which include many dogs, many self-portraits, all gone brilliantly wrong. Even in this company, however, Bush is not quite “outsider” enough. Perhaps that month of painting lessons tempered his talent; but in W's passably rendered, pragmatic view, Kahlo's bathtub of horrors becomes, well — some legs through grayish water. His paintings also resist the art-historical training of our critics who, faced with the absence of the usual conversation, defaulted to fishing for clues to the artist's psyche. But Bush II was not the kind of president whose actions revealed an inner life — and he is not that kind of painter. In other words, if you can read the skewed, oily look in that beige dog’s eyes as emotion, you can do the same for 43. Bush is trying to paint. He does so with dynamic, unbalanced style — a pleasant unsettling of visuality not unfamiliar to anyone who has ever looked at an animal or taken a shower while hallucinating. We're drawn, vertiginously, to distortion, to shifts in perspective, to the edge of a meaningless pit. And here on the edge of absurdity, perhaps we can shocks ourselves upright, out of the warm placid water and into conscious thought — the way the morning news can enrage you out of bed. Similarly, these treacly, vacant scenes present us with an incongruous “side” of W., now the President Who Paints — for some suddenly a human being. Ultimately, though, 43's art is as inscrutable as foreign policy handed down from a Higher Father. In the case of these paintings — wrested into the public eye by an extrajudicial hack — we should not attempt, nor should we expect, an explanation.