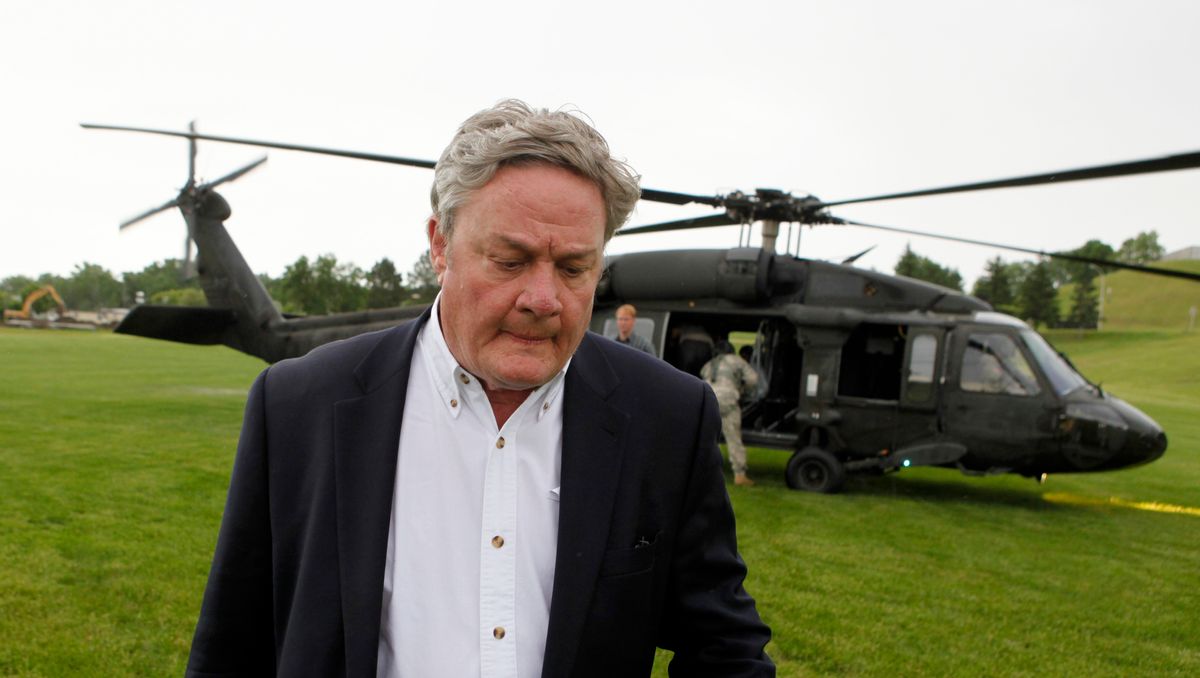 BISMARCK, N.D. (AP) — North Dakota's governor positioned the oil-rich state Tuesday as a primary battleground in the decades-old fight over abortion rights, signing into law the nation's toughest restriction on the procedure and urging lawmakers to set aside cash for an inevitable legal challenge.

Minutes after Republican Gov. Jack Dalrymple signed three anti-abortion measures — one banning them as early as six weeks into a pregnancy — unsolicited donations began pouring into the state's lone abortion clinic to help opponents prove the new laws are unconstitutional.

"Although the likelihood of this measure surviving a court challenge remains in question, this bill is nevertheless a legitimate attempt by a state legislature to discover the boundaries of Roe v. Wade," Dalrymple said in a statement, referring to the 1973 U.S. Supreme Court ruling that legalized abortion up to until a fetus is considered viable — usually at 22 to 24 weeks.

Dalrymple seemed determined to open a legal debate on the legislation, acknowledging "the constitutionality of this measure is an open question." He asked the Legislature to set aside money for a "litigation fund" that would allow the state's attorney general to defend the measure against lawsuits.

He also signed into law measures that would makes North Dakota the first state to ban abortions based on genetic defects such as Down syndrome and require a doctor who performs abortions to be a physician with hospital-admitting privileges.

The measures, which would take effect Aug. 1, are fueled in part by an attempt to close the Red River Women's Clinic in Fargo — the state's sole abortion clinic.

Tammi Kromenaker, the clinic's director, called the legislation "extreme and unconstitutional" and said Dalrymple "awoke a sleeping giant" by approving it. The clinic, which performs about 3,000 abortions annually, was accepting cash donations and continued to take appointments Tuesday, she said.

"First and foremost, abortion is both legal and available in North Dakota," she said. "But anytime abortion laws are in the news, women are worried about access."

The Center for Reproductive Rights announced Tuesday that it has committed to challenging the fetal heartbeat bill on behalf the clinic. The New York-based group already represented the clinic for free in a lawsuit over a 2011 law banning the widely accepted use of a medication that induces abortion. A judge has temporarily blocked enforcement of the law, and a trial is slated for April in Fargo.

Attorney General Wayne Stenehjem told The Associated Press that the attorneys from his office would defend any lawsuits that arise but an increase to the agency's budget would likely be necessary. He did not have a dollar amount.

The state has spent about $23,000 in legal costs to date defending the 2011 legislation banning the widely accepted use of a medication that induces abortion, according to agency records obtained by The Associated Press.

Julie Rikelman, litigation director for the Center for Reproductive Rights, said the group has provided three attorneys to argue that case. But in the recent round of legislation, the fetal heartbeat measure is priority because it would effectively ban abortion in the state, she said.

"The impact is very, very clear," she said. "It would have an immediate and very large impact on the women in North Dakota."

Rikelman said the center also would support the clinic in other litigation, if need be and at no cost.

Kromenaker said other states have spent millions of dollars defending legislation, if the case reaches the nation's high court. Rikelman said it's impossible to put a dollar amount on the impending legal fight in North Dakota.

"Litigation is so unpredictable," she said. "It could be very quick with a ruling in our favor."

North Dakota's law, which would ban most abortions as early as six weeks into a pregnancy, goes even further than a bill approved earlier this month in Arkansas that establishes a 12-week ban — prohibiting them when a fetal heartbeat can be detected using an abdominal ultrasound. That ban is scheduled to take effect 90 days after the Arkansas Legislature adjourns.

A fetal heartbeat can generally be detected earlier in a pregnancy using a vaginal ultrasound, but Arkansas lawmakers balked at requiring women seeking abortions to have the more invasive imaging technique.

North Dakota's legislation doesn't specify how a fetal heartbeat would be detected. Doctors performing an abortion after a heartbeat is detected could face a felony charge punishable by up to five years in prison and a $5,000 fine. Women having an abortion would not face charges.

Representatives also endorsed another bill last week that would ban abortions after 20 weeks of pregnancy based on the disputed premise that fetuses feel pain at that point. That measure awaits Dalrymple's signature.

Dalrymple attended a groundbreaking ceremony Tuesday for a new diesel refinery in western North Dakota and made no public appearance to explain his signing of the abortion legislation.