My “hypocrisy” about the Bush daughters

I regret covering their drinking, but they were adults. Outing the Obama girls’ vacation location puts them at risk 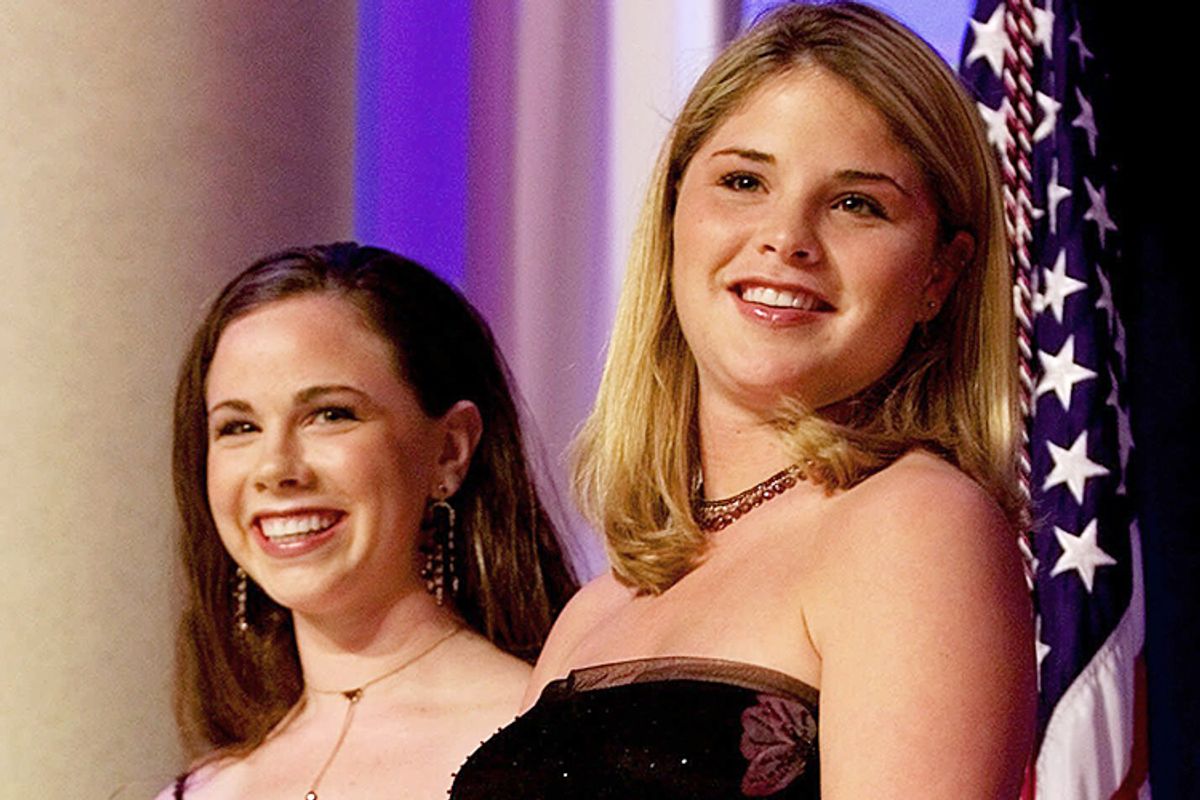 Mediaite has a nice gotcha item about my post on Breitbart.com Matthew Boyle’s outing the vacation spot of Malia and Sasha Obama this week. Twelve years ago, apparently, I wrote a column about why Jenna and Barbara Bush’s brushes with police over underage drinking – they were 19 – were fair game for the media.

Let me admit up front: I wouldn’t write that column today. There’s too much silly schadenfreude in it. Especially since the Bush daughters both grew up to be apparently fine young women, I was wrong to suggest there might be larger issues in their genuinely youthful indiscretions. It was newsworthy -- in Austin, Jenna was breaking a law her father signed as governor -- but as a columnist, I don't write about everything that's news. If I did write about it again, I hope I'd take a different tone 12 years later.

But if conservatives can’t see the difference between breaking with convention to identify the exact location where the president’s underage children are vacationing -- a breach of journalistic convention with potential implications for their safety -- and writing about the adult first daughters’ (and friends’) skirmishes with police over illegal drinking, which were already in the news – well, if they don’t see the difference, they’re not trying very hard.

Republican National Committee chairman Reince Priebus purports to want to understand why minorities, including African-Americans, don’t feel welcome in the Republican Party. It would help if people who are confused could open their minds for a moment, and think about the way their team talks about the first family. One consistent theme is that they’re arrogant and entitled, simply when they do things that first families have done since time immemorial.

Whether it’s Michele Bachmann making up lies about how much their trips cost, or the entire conservative blogosphere freaking out over Michelle Obama’s trip to Spain or her fancy shoes, or whining about the president bringing in a few things of his choice to the Oval Office, or apoplexy over the fact that Malia and Sasha have armed protection at their school, as all first children have always had, or that they are vacationing during the sequester! (Boyle's latest excuse for his dreck) though families of presidents have vacationed in times of recession and war; when conservatives freak out over things that are either exactly the same or directly comparable to what every American president and his family have done, well, it’s easy to get the feeling that some people think our first black first family doesn’t deserve what other first families do.

Or that conservatives think they’re a little bit uppity, somehow living beyond their station, even though their station (the presidency) is the very highest station in the land.

And when a marginal right-wing faux-journalist decides he’s going to flout journalistic convention and tell his right-wing readers exactly where the Obama girls are vacationing, it shows a kind of contempt for the family, and something else: It shows that he and his colleagues don’t really care much about what happens to those girls. If the Secret Service and the White House say revealing their location makes them less safe (which is why other news organizations don’t do it)? Well, so be it. They can live with that. That makes some of us feel like maybe those girls’ lives don’t matter, to Boyle and his colleagues and their “army,” as much as other first children’s lives. Maybe Boyle doesn’t really believe that, but he ought to think it through.

Sure, other presidents’ children have faced mistreatment: John McCain made an ugly joke about Chelsea Clinton; Rush Limbaugh was a pig about her regularly. I wrote a column calling attention to the adult Bush twins’ under-21 drinking, and 12 years later, I wish I hadn’t. But I wasn’t the only one who thought their drinking, or their run-ins with authorities over it, was newsworthy (imagine if the Secret Service had to bail Malia Obama's boyfriend out of jail after arrest for public drunkenness, as they did Jenna's), and no one who wrote about it felt or was warned that they were endangering the young women by doing so.

Thumbing your nose at convention when it comes to revealing the whereabouts of the 14- and 11-year-old daughters of the president? That’s an entirely different story, and any Republican who wants to change the party’s reputation with minority voters ought to at least think about how very different it is.

To show how low the right is going, and their incapacity for reflection when it comes to Obama, post-Breitbart, post-CNN former mini-star Dana Loesch Tweeted this about my Bush daughters’ story:

I don't get the reference to racism, but I don't get a lot of right-wing humor.