Sorry, women! Your "freedoms" aren't as important as freedom from excessive taxation 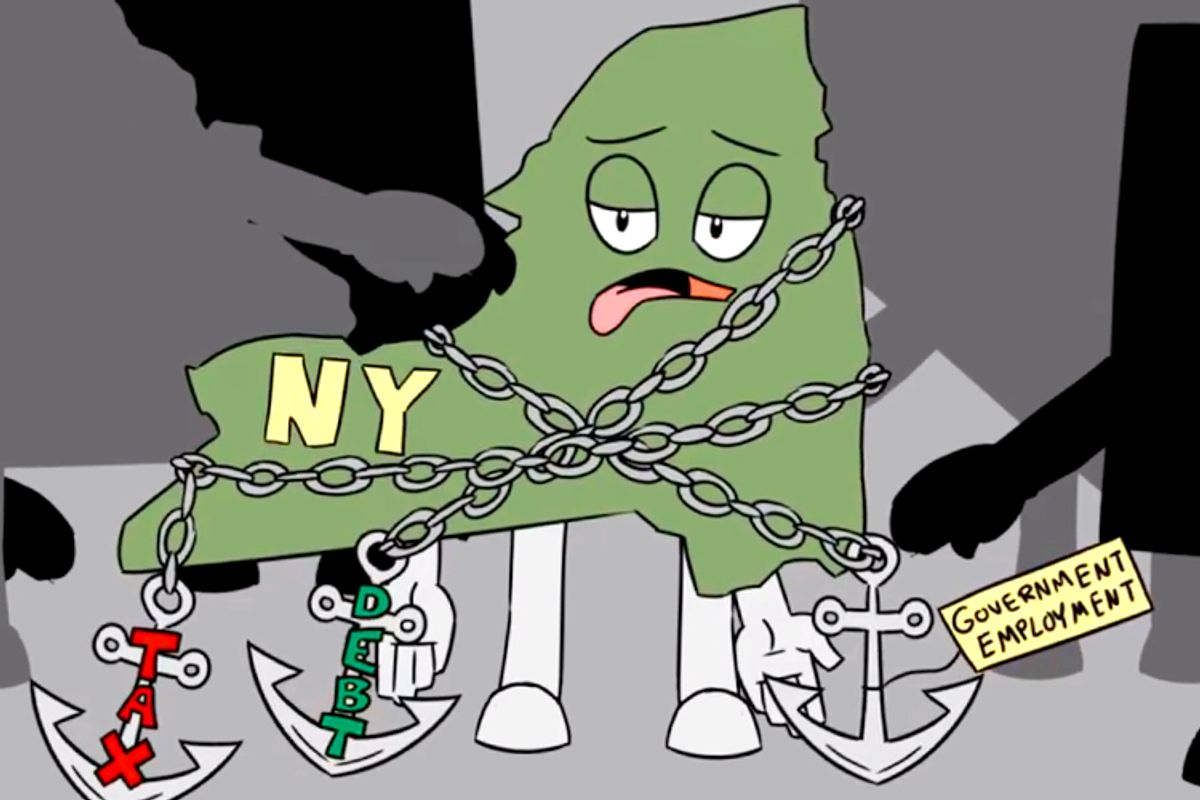 The Mercatus Center, a libertarian-oriented -- and Koch brothers-affiliated -- think tank based out of George Mason University (a public university, for whatever that's worth), regularly releases its ranking of American states in terms of "Freedom." Their definition of "freedom" largely adheres to the standard American libertarian conception of "liberty," which is to say it is oriented almost entirely around private property ownership and low taxation. As a result, America's freest state this year turns out to be North Dakota.

North Dakota has also been in the news for another reason recently. What was it, again? Oh, right, it passed the most restrictive antiabortion laws in the country. Including a law specifically aimed at shutting down the state's lone abortion provider. It passed this law knowing it was unconstitutional.

The data Mercatus used, as far as I can tell, are largely from 2011. But these laws wouldn't do a thing to change's North Dakota's ranking, because Mercatus doesn't take reproductive rights into account at all. In fact, no issues specifically related to women's rights are taken into account. Same-sex marriage is included, but not housing employment anti-discrimination rules. They do weigh "'smoker protection' in employment," though. (I think they are in favor of laws barring companies from firing smokers. Isn't that the government interfering with the employer's Freedoms?) There is also a list ranking the states in terms of friendliness to Bachelor Parties.

[UPDATE: Mercatus opposes "smoker protection laws" and a state's rank fell if it had them. I apologize for getting that wrong, and assuming the Institute had an inconsistent position. Thank you to Radley Balko, whose work I've always sincerely admired, for correcting me and then calling me a hack.

I'd still note that in the report's scoring system, "Tobacco Freedom," which is mainly about smoking bans and cigarette taxes, makes up 4.1 percent of a state's "freedom ranking." "Marriage Freedom" is 2.1 percent. Freedom from "Asset Forfeiture" -- a frequently abused police outgrowth of the drug war -- is 0.1 percent, which would seem to indicate that it's included mainly to say that it was included.]

"Economic freedom" is of course their most important freedom, and so it is weighted the heaviest, with fiscal and regulatory matters making up a bit more than two-thirds of each state's score. Which is how their No. 1 freest state is ranked 39th on the "Civil Liberties" list. Though that list is fairly useless, as their definition of "civil liberties" is "unrelated policies, such as fireworks laws, prostitution laws, and trans-fat bans." On the list taking into account "incarceration rates, non-drug crime arrests, and drug enforcement," Freest State North Dakota is at 24. (Second-freest state South Dakota is 48.) And Arizona has climbed to No. 11 on the overall list, because at no point are the rights of immigrants or people whom the police may suspect are immigrants taken into account.

Also fun is their "Right to Work" list, where every single state is either tied for first or tied for last. (It should be noted that many libertarians think there's nothing particularly libertarian about Right to Work laws, which are strictly pro-business, not pro-"market.")

And they made a cartoon.

So this is how the Mercatus Center defines freedom: the right of people with money to keep it all, and for everyone else to fuck off. Almost any Liberty issue that wouldn't concern a straight, white, male capitalist is wholly ignored.

The Mercatus Center, coincidentally, is run in large part with money from Koch Industries. Charles Koch sits on its board, along with another high-ranking Koch Industries executive. Mercatus is effectively the in-house think tank for the Kochs, providing reports and research that support the ideological aims of the notorious brothers, and their ideological aims usually also support the long-term goal of the Kochs to make as much money for themselves as possible without anyone telling them to "pollute a bit less" or "pay taxes."

Looking at the list, it's clear that most Americans have "voted with their feet" and chosen to live primarily in our least free states. Bottoming out the list are California, the second-least free and most populous state, and New York, third in population and dead last in liberty.

I called North Dakota a "fucking shithole" on Twitter earlier, which was unfair of me, because while it is unreasonably, inhospitably freezing cold in much of the state for much of the year (and I say this as someone who grew up one state away) it is, on the whole, a reasonably pretty part of the country full of decent people (unless you are openly gay or transgendered or in need of an abortion obviously). I can more easily figure out why people, indigenous and immigrant, settled there than, say, Phoenix. But there is a reason that fewer people live in all of North Dakota than in Detroit, and there is a reason why the population of North Dakota slowly declined from the 1920s through the end of the 20th century: Not that many people want to live there. People are moving there now because of a natural resources boom (and those always last forever and always create permanent, stable communities, right?) not because North Dakota suddenly became a much nicer place to live, on account of freedom.

New York and California, though, are both super-nice, even though we confiscate more money than North Dakota, and spend it on things like mass transportation (freedom from having to own cars!) and helping people without means get food and healthcare (freedom from dying!). Koch industries co-owner David Koch, for the record, lives in New York City. Though I imagine he and his brother will soon pack up and relocate to sunny, free Grand Forks.

It is a very obvious observation but it is still the case that Americans -- and people everywhere else -- have generally decided that they don't mind a bit of taxation in exchange for a more humane and fairer society. This Mercatus Study, with its limited, self-serving definition of "freedom," is like a mean-spirited parody of the sort of "libertarianism" that's just a front for the interests of the wealthy and powerful.