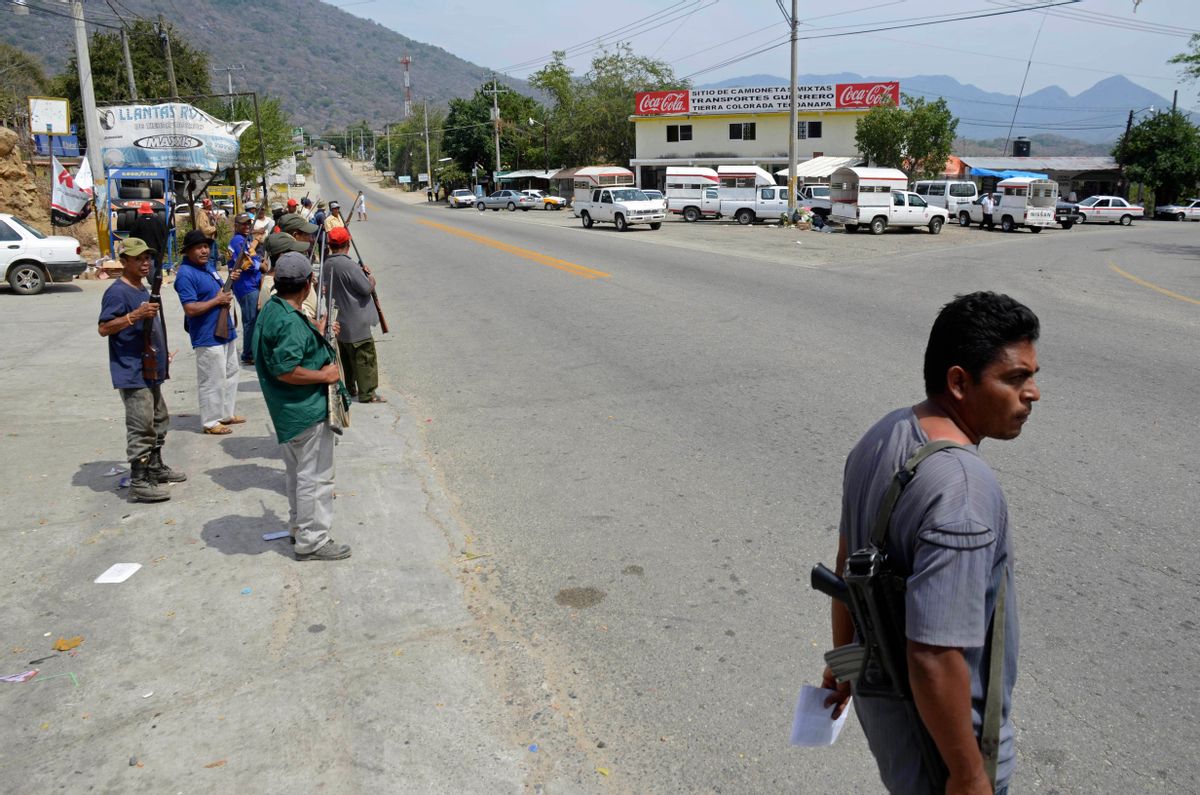 A group of armed vigilantes stand at the entrance to the town of Tierra Colorada, Mexico, Wednesday, March 27, 2013. (AP/Bernandino Hernandez)
--

Hundreds of armed vigilantes have taken control of a town on a major highway in the Pacific coast state of Guerrero, arresting local police officers and searching homes after one of their leaders was killed. Several opened fire on a car of Mexican tourists headed to the beach for Easter week.

Members of the area's self-described "community police" say more than 1,500 members of the force were stopping traffic on Wednesday at improvised checkpoints in the town of Tierra Colorado, which sits on the highway connecting Mexico City to Acapulco. They arrested 12 police and the former director of public security in the town after a leader of the state's vigilante movement was slain on Monday.

A tourist heading to the beach with relatives was slightly wounded on Tuesday after they refused to stop at a roadblock and vigilantes fired shots at their car, officials said.

The vigilantes accuse the ex-security director of participating in the killing of their leader Guadalupe Quinones Carbajal, 28, on behalf of local organised crime groups and dumping his body in a nearby town on Monday.

"We have besieged the municipality, because here criminals operate with impunity in broad daylight, in view of municipal authorities. We have detained the director of public security because he is involved with criminals and he knows who killed our commander," said Bruno Placido Valerio, a spokesman for the vigilante group.

Placido said vigilantes had searched a number of homes in the town and seized drugs from some. They turned over the ex-security director and police officers to state prosecutors, who agreed to investigate their alleged ties to organised crime.

The growing movement of "self-defence" vigilante groups has seen masked townspeople throw up checkpoints in several parts of southern and western Mexico, stopping passing motorists to search for weapons or people whose names are on hand-written lists of "suspects" wanted for crimes like theft and extortion.

The vigilantes have opened fire before on motorists who refused to stop, slightly wounding a pair of tourists from Mexico City visiting a local beach in early February.

The groups say they are fighting violence, kidnappings and extortions carried out by drug cartels, but concerns have surfaced that the vigilantes may be violating the law, the human rights of people they detain, or even cooperating with criminals in some cases.

Sensitive over their lack of ability to enforce public safety in rural areas, official have largely tolerated vigilante groups.