It was a base for the teen evangelical movement, where I saw fundamentalist Christianity's power, and its danger 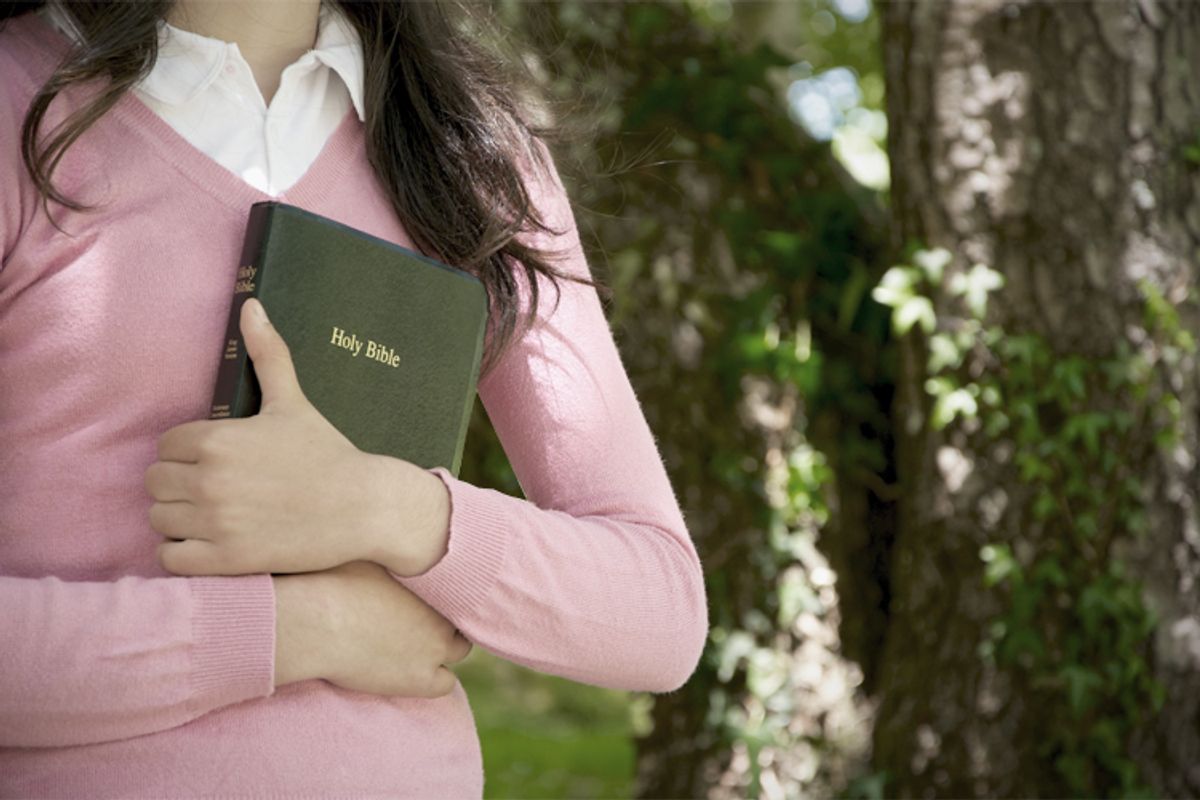 Few people had ever heard of Steubenville, Ohio, until a shocking act of violence catapulted the small town onto the national stage. What most people don't know is that Steubenville is home to North America's largest evangelical teen gathering, and for three days each summer in high school, I joined them.

Back at home, youth group was a place to meet friends and participate in community service. There were beach parties and Christmas caroling. I met my first boyfriend.

Steubenville was Christianity ratcheted up, with the sort of weeping adoration one usually sees at concerts of preteen idols. At Steubenville, we were zealots. A team. We had our chants, our cheers, our rallying call. I can still summon the refrain of the evangelical anthem "Refiner's Fire," although I wouldn't be able to recall my high school's fight song even if someone handed me the lyrics. I've been imprinted. I consented to going without realizing what I was getting into, and once I knew, I went still. It was one of the few times each year I could step away from the confines of my conservative Catholic upbringing. I stepped deeper into that world, and the rules that governed it, without even noticing.

In those days, Steubenville was a safe haven protected from the outside world. A time and place of innocence, where nothing could hurt us. We were blank slates, ready to be scribbled upon.

We gathered in seminars to discuss celibacy. We listened to seemingly savvy college students discuss how Jesus had made all things possible for them. We were told, repeatedly, that we were part of a community, we were loved, we were safe. We were blessed, and were the blessed.

There was a darker side, of course, to this exclusivity, and a double-edged sword to the conferences' messages. Looking back, I remember a staggering number of people just like me; white, middle-class, suburban, straight. We were regaled with literal interpretations of the Bible. We heard lectures on the sanctity of life in all its forms, the perils of evil, on God's plan for marriage. We were told that God had a purpose for us, that we were part of a larger community of believers who would be sheltered as long as we led a pure life. We left thinking that nothing bad could ever happen, or if it did, we could survive the test to have a closer relationship with God, as narrowly defined.  We thought we were better, because we were told we were better, that all our sins would be forgiven, that we were chosen. (Twenty years later, that theme still holds. The title of this year's conference is "Chosen.")

It was a heady message, that our sins against each other were a result of temptation, and we were just pawns in an eternal struggle between good and evil. Because, after all, how can we be accountable if Satan's really the one pulling the strings? Or if we've turned over our choices to God's plan?

We were teens, some of us nearing college, some of us just starting high school, and we were struggling to find our footing in the world. Amid the realization that our lives would soon be in our control came both terror and excitement. Being laid in front of us was a blueprint for living. I looked upon it even then as a starting point, willing to consider the possibilities, but recognizing they were just a few of many possibilities the world had to offer. This, of course, was not the message on hand.

For those, like me, who weren't fully committed, Saturday night was designed to make us converts. We piled into a large tent, where an elaborate performance that was half rock show and half pep rally throbbed to a display of lights. We’d spent the day in gender-specific sessions urging us to deflect the random attentions of the opposite sex in favor of a "holy love" and now we were at a party filled with those same tempters and temptresses. If there has ever been more awkward flirting in the history of the world than in the tent in Steubenville on Saturday night, I've never seen it before or since. Years later, I attended a silent disco where everyone wore headphones tuned to different stations, and watching the crowd move to alternate rhythms reminded me of those Saturday evenings in Steubenville, where the boys and girls danced, so painfully out of sync with each other.

We rocked out to Christian music with our hands in the air, watched people convulse in spiritual conversions as they were "saved" or "born again" and heard priests speak in tongues. There was holy water on hand for blessings and baptisms. Being surrounded by people weeping in adoration, or jabbering to spirits, I could only be a detached observer. I simply didn't get it. It was a baffling other language, one I did not care to learn.

I suspect now that had I raised my doubts during any of those weekends, I would not have been alone in my questions. But it would have meant being outcast by the religious leadership and losing those precious weekends away from home. Because to not go along, to not buy into what was being sold, would have been paramount to heresy. The emperor might not have been wearing clothes, but I certainly wasn't going to be the one to point it out.

After three years, the messages of Steubenville began to ring hollow. With the promise of college in sight, I took the last bus out of Steubenville the summer before my senior year and never looked back. I rode back home with the clothes on my back and nothing else; someone had stolen my backpack and sleeping bag on the last day of the retreat.

For all its intentions of crafting Christians for life, those weekends in Steubenville had the opposite effect on me. High on the knowledge that Christians were morally superior, the chosen ones, I found the days following my return home jarring. At my family's church, we'd listen to homilies about loving each other, only to cut each other off while getting out of the parking lot. We were supposed to treat everyone as we'd treat God should he appear, but judged and ostracized those not living to the moral code strictly outlined by various interpretations of the Bible. A neighbor committed suicide, and we were told she was going to hell because taking one's own life was a mortal sin. That she had been in pain, and no one had reached out, was overlooked.

I began opting out. I stopped going to confession, believing instead that if we harm someone we should apologize to that person instead of being absolved by a third party. I went away to college and stopped attending church. When I returned home on breaks, I attended church with my family but didn't take communion because I hadn't gone to confession, as the Catholic Church strictly teaches. I met people of different faiths and gender and sexual preference and heard how "those people" had used the Bible to discriminate against them, and realized those people had been my people.

I joined the church of "try to be a good person" and left all other churches behind. I have friends now who are devout Christians and are the kindest, most loving people I've ever met, and accept me even though I don't share their beliefs. Alongside them, I count as friends and loved ones Lutherans, and Protestants, and Quakers, and Jews, and Buddhists, and Muslims and atheists. I've learned something from each of them. I don't worry for their souls. (I'm not entirely convinced they don't worry for mine.)

It would have been easy for me to stay along the path I was headed. Many people did. Several retreat-goers graduated high school and continued on as adult leaders, bringing youth groups to Ohio year after year. The conference is in its 37th year, and will no doubt continue long into the future. There will always be a place where people don't question, where they go along to stay on the inside, where doubts are quieted in fear, where the need to belong is great. As a 16-year-old girl, I was able to leave Steubenville behind by escaping its dogma. As a woman in her 30s, I'm able to look back at that time and see the damage such thinking can do. I can't regret attending those weekends, however, because they taught me what people who don't share a devout view of religion are up against. And I share their fight.

The story of Steubenville has captivated the nation, and with cause. The casual brutality of it, the shocking way the spectators related the events on camera, later spread via social media. It’s a horrifying reminder that we were all young once, and vulnerable. That girl was 16, too, and the Steubenville she saw was a much darker place than the one I experienced. Her tale rips me up, because she was victim of a culture that was not safe, where football was the religion and the boys were the chosen ones. Not everyone can leave Steubenville on the back of a bus.

I was lucky I could. I was lucky that I could move on from my own closed world. Every life has a loss of innocence -- when we stop trusting the world and the people around us as inherently good -- but in that moment are the first seeds of adulthood. To paraphrase a lesser-known passage in 1 Corinthians 11: “When I was a child, I spoke like a child, I thought like a child, I reasoned like a child. Then I grew up, and gave up childish ways.”

Molly McCluskey is a full-time freelance writer currently based in Washington, D.C. Follow her on Twitter at @MollyEMcCluskey.