Obama: "Shame on us" if we forget Newtown 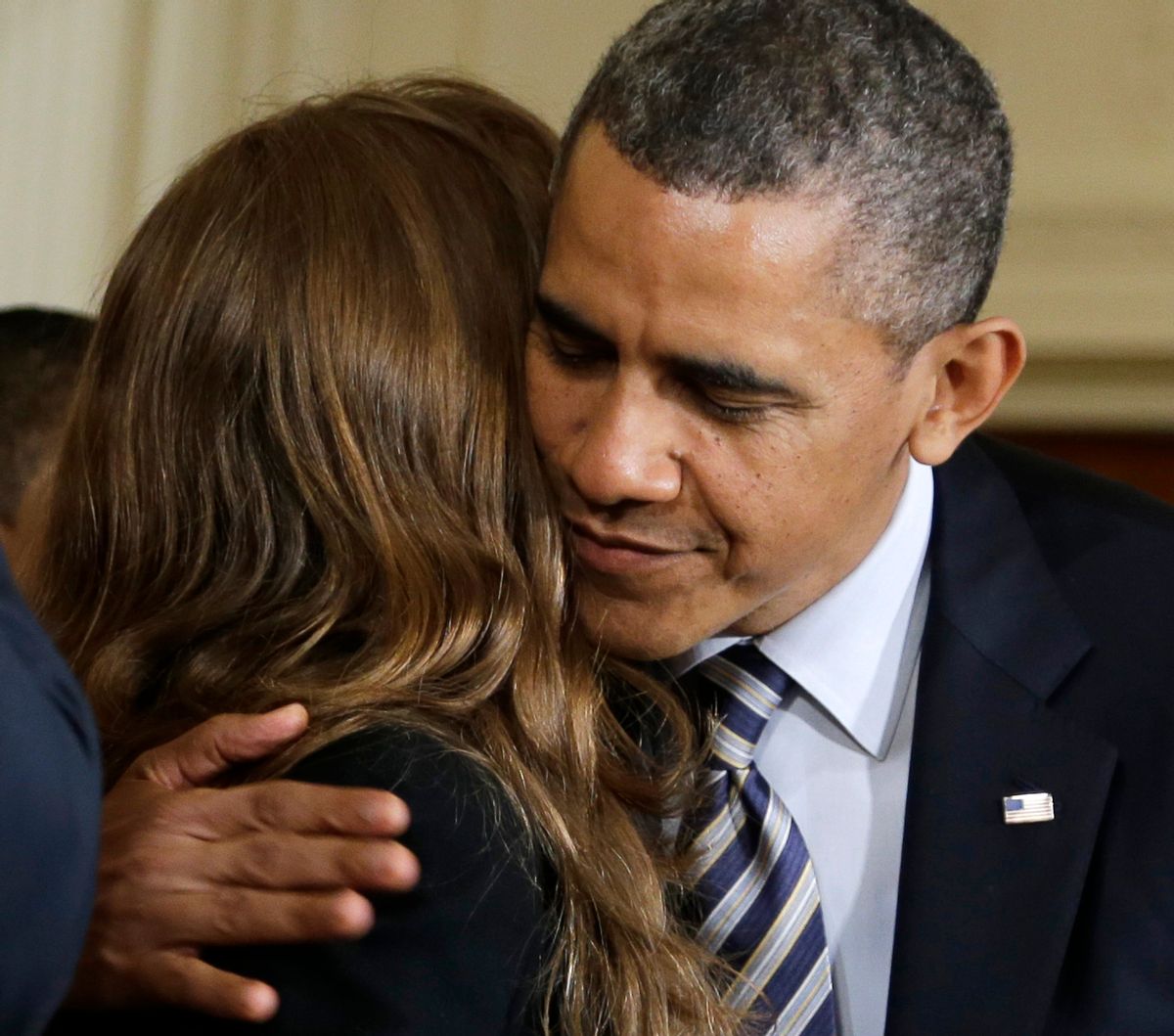 President Barack Obama hugs Katerina Rodgaard, a Maryland dance instructor who knew one of the victims of the Virginia Tech shootings, after she introduced him in the East Room of the White House in Washington, Thursday, March 28, 2013. (AP/Carolyn Kaster)
--

WASHINGTON (AP) — President Barack Obama urged lawmakers Thursday to remember the children gunned down in America and not "get squishy" in the face of powerful forces against gun control legislation, as supporters struggle to win over moderate Democrats before a Senate vote expected next month.

Obama, flanked by grim-faced mothers who have lost their children to guns, said Washington must do something after the tragic mass shooting in Newtown, Conn., three months ago. He called out to the families of four children killed at Sandy Hook Elementary School sitting in his audience.

"Shame on us if we've forgotten," Obama said. "I haven't forgotten those kids."

Obama said the upcoming vote is the best chance in more than a decade to reduce gun violence. He encouraged Americans, especially gun owners, to press lawmakers home from a congressional spring break to "turn that heartbreak into something real."

"Don't get squishy because time has passed and it's not on the news every single day," Obama said.

Moderate Senate Democrats like Mark Pryor of Arkansas and Heidi Heitkamp of North Dakota are shunning Bloomberg as a meddling outsider while stressing their allegiance to their own voters' views and to gun rights. While saying they are keeping an open mind and that they support keeping guns from criminals and people with mental disorders, some moderates are avoiding specific commitments they might regret later.

"I do not need someone from New York City to tell me how to handle crime in our state. I know that we can go after and prosecute criminals without the need to infringe upon the Second Amendment rights of law-abiding North Dakotans," Heitkamp said this week, citing the constitutional right to bear arms.

Heitkamp does not face re-election next year, but Pryor and five other Senate Democrats from Republican-leaning or closely divided states do. All six, from Southern and Western states, will face voters whose deep attachment to guns is unshakeable — not to mention opposition from the still-potent National Rifle Association, should they vote for restrictions the NRA opposes.

"We have a politically savvy and a loyal voting bloc, and the politicians know that," said Andrew Arulanandam, spokesman for the NRA, which claims nearly 5 million paying members.

The heart of the Senate gun bill will be expanded requirements for federal background checks for gun buyers, the remaining primary proposal pushed by Obama and many Democrats since 20 first-graders and six women were shot to death in December at an elementary school in Newtown, Conn. Senate Democratic leader Harry Reid of Nevada has said there aren't enough votes to approve a ban on assault weapons, while prospects are uncertain for a prohibition on large-capacity ammunition magazines.

Today, the background checks apply only to sales by the nation's roughly 55,000 federally licensed gun dealers. Not covered are private transactions like those at gun shows and online. The Senate measure is still evolving as Sens. Chuck Schumer, D-N.Y., Joe Manchin, D-W.Va., and Mark Kirk, R-Ill., use Congress' two-week recess to negotiate for additional support in both parties.

Polls in some Southern states have been comparable. March surveys by the Quinnipiac University Polling Institute found more than 9 in 10 people in Florida and Virginia backing expanded background checks, the same margin found by an Elon University Poll in North Carolina in February.

Analysts say people support more background checks because they consider it an extension of the existing system. That doesn't translate to unvarnished support from lawmakers, in part because the small but vocal minorities who oppose broader background checks and other gun restrictions tend to be driven voters that politicians are reluctant to alienate.

"It's probably true that intense, single-issue gun voters have been more likely to turn out than folks who want common-sense gun laws," said Mark Glaze, director of Mayors Against Illegal Guns, the group that Bloomberg helps lead. Glaze, however, said he believes that voters favoring gun restrictions have become more motivated since Newtown and other recent mass shootings.

Several moderate Democrats are holding back as they assess the political landscape. They're also waiting to see exactly what the Senate will consider.

Sen. Mark Begich, D-Alaska, said Wednesday his state's voters tell him, "Don't take away our rights, our individual rights, our guns." Begich said he opposes a strict proposal requiring background checks for nearly all gun sales but will wait to see whether there is a bipartisan compromise he can support.

The problems faced by gun control supporters go beyond the challenge of winning over moderate Democrats. GOP opponents are sure to force Democrats to get 60 of the Senate's 100 votes to win, and there are only 53 Democrats plus two independents who generally support them.

Also targeted by Bloomberg's ads are 10 Republicans, including Sen. Jeff Flake of Arizona, home of ex-Rep. Gabrielle Giffords, who was severely wounded in a mass shooting; the retiring Sen. Saxby Chambliss of Georgia; and moderate Sen. Susan Collins of Maine.

In another indicator of hurdles facing gun control forces, the Senate voted 50-49 last week to require 60 votes for any legislation narrowing gun rights. The proposal lost because 60 votes in favor were required, but six Democrats voted for the proposal, offered by conservative Sen. Mike Lee, R-Utah.

"It confirms there's no such thing as an easy gun vote," said Jim Kessler, a senior vice president of the centrist Democratic group Third Way.

More abrupt changes like an assault weapons ban generally get slight majorities in polls. Democratic leaders decided to omit it from the Senate bill because such a provision lacks enough votes.