Nicole Spector: That's not my dad

I hoped HBO's biopic about Phil Spector would be about justice. Instead, it doesn't even pretend to tell the truth 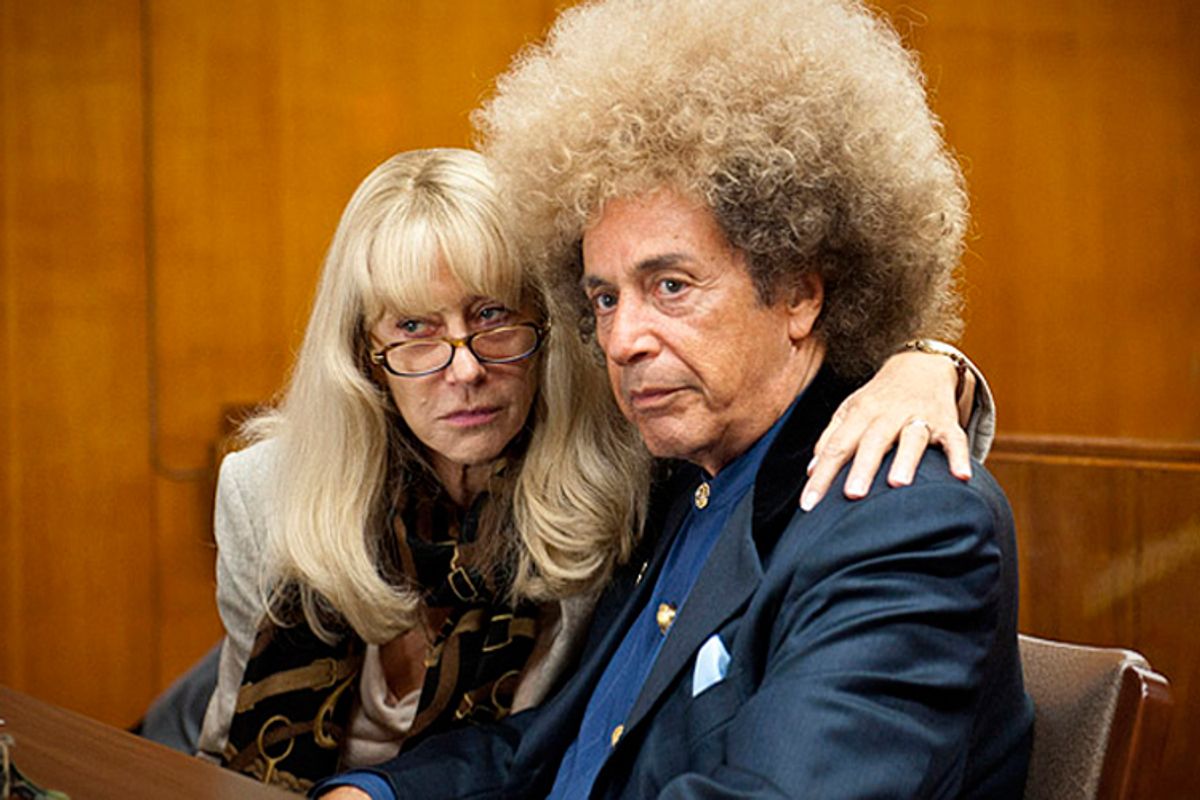 When I heard that David Mamet would be making a movie about my father's court trials, I got dizzy – the good kind of dizzy. I mean, it wasn't the bad kind of dizzy I was used to. It wasn't the emotional vertigo, plane shake over black water, fumble for the Valium in your purse dizzy. This was more like a hot bath, antihistamine-haze, swig of champagne dizzy. Discombobulation with a bit of whimsy! A gust of hope fled through me.

It was 2011, and my father had been incarcerated for two years. Sitting in the sealed-off visiting center, with its crusty, spider-smeared floors and well-behaving, leering psychopaths (guards included), this was the first time that I was hearing good news. I mean, it wasn't the overwhelmingly — and frankly, unmanageable — bad news I was used to hearing.

It struck me that Mamet's interest in my dad's situation was compassionate, perhaps even philosophical, and that he would be focusing on matters of justice. In his retelling, Mamet could sift through the welter of misunderstandings and exaggerations that surrounded my dad's trials and ultimate conviction. He could use “the power of art” to suggest, if not a new conclusion, at least a new perspective. My father had been pursuing an appeal since his 19-years-to-life sentence began. Maybe this was an echo of that pursuit. Maybe Mamet was going to help bring my dad home.

The idea that something positive was on the horizon for my dad was suspicious. When it came to the media and my father, bad news had been the norm since 2003. It was in February of that year that my dad was first caught up in the death of Lana Clarkson. I was a junior in undergrad, staring at a dry-erase board in a magical realism class led by a beautiful, petite French woman who seemed physically terrified of her students' mental limits, when the news broke. García Marquez and Ben Okri had been open on the table before me; who knows how long the news had been out that an unidentified woman was found dead in my pop's foyer. I've often thought of those final moments of oblivion just before I heard. I would like to report that they were Edenic, that there was a prelapsarian glow, but they were just ordinary and boring and I was impatient. I guess the main thing, I think, is that I still don't much care for magical realism.

The afternoon's class, which I remember as “100 Minutes of Awkward Silence,” finally ended, and I went out into the hall. It was 10 minutes to 4. Maybe I had another class that afternoon. Maybe I was going to go read the "Nicomachean Ethics" in the graduate center, and by "read the 'Nicomachean Ethics' in the graduate center," I mean ... well, actually, I mean just that. I was aspiring to be a “rockstar academic,” which is what Matthew Dean Ryan, my chain-smoking crush who only ever went by all three of his names, described himself as. I wanted him to dump his model girlfriend for me and my incredible, Aristotled mind. And if he wouldn't do that, I wanted him to at least speak to me.

As I was on my way to do whatever I was on my way to do — no doubt thinking about Matthew Dean Ryan's memorized schedule so as to finagle a run-in where I'd do all the talking and he'd do all the smoking — a woman rushed before me. Her urgency was commanding. It took me a few moments to register recognition. It was Robin Klein, the daughter of the late Allen Klein, my dad's longtime friend and business partner. I'd known her for as long as I'd known people.

Soon, it was official. My father was charged with the murder of a 40-year-old woman named Lana Clarkson. I'd never heard of her.

Perhaps there’s no need to say that it was a traumatic time. I've always been exceptionally close with my dad, and I have enough mugs in the vein of “Daddy's Girl” to supply a Father's Day special at a coffeehouse. The murder trials and intensive media coverage that followed — his first trial was the first to be televised live on CourtTV since O.J. Simpson's — were an exhausting and convulsive reiteration of the trauma. I was usually numb or angry or having some secret panic attack in the unfeeling fluorescence of a movie theater bathroom. I tried to keep my life “normal." Aside from brief visits to L.A., I stayed in New York and focused on my job: first at a magazine, then in book publishing. I had a similarly bookish boyfriend, fun alcoholic roommates and a tabby cat who slept on my head. I was just another broke insomniac writing bad short stories and trying to build her vintage wardrobe. I may have been a cliché of a 20-something Brooklynite, but I was my cliché. Those same things that kept me sane in my early 20s now keep me sane at 30, as I come around to the idea that Mamet's movie is probably not going to be the thing that brings my father home. And that’s because the movie — which I haven’t seen, which I can’t see — doesn’t tell the full story. How could it? More to the point, it doesn’t even make proper sense of its subject. “Phil Spector” — as he was portrayed by the media during the trials or even long before that — isn't my dad. He never was.

The image of the flamboyantly clad, platform-footed and, yes, bewigged man that was the ill-fated star of the two murder trials is precisely that: an image. And it's one I believe my dad carefully curated at a young age for whatever reason, perhaps to control, or at least manage, a persona in the spotlight.

Growing up, Dad had little in common with this Phil Spector character. Dad wore tank tops and Laker shorts. Unless you count a favorite old fisherman's cap, there was no toupee. He was a bargain shopper known to troll the aisles of our local Von's and Ralph's, stocking up for the week. Pasadena was too pretentious for him, so forget Beverly Hills and Bel Air. I don't think anyone with Dad's income, and certainly no one with his fame, has ever chosen the smoggy suburban city of Alhambra to set up fort. But Dad did. Even I, who attended South Pasadena High one city over, was a little embarrassed by the relocation. All the storefronts there were in Chinese. No one I was friends with lived there. Where other cities had parks, Alhambra had sprawling parking lots with just a touch of strip mall enclosing them. I worried what people would think. Contrary to the entourage-surrounded “Phil Spector” of CourtTV fame, my dad didn't give a damn what people thought. He just wanted peace, quiet and less traffic. He adopted a miniature schnauzer who came with the name Helmut (he kept the name) and a black stray cat he found and named Smokey. Wild rabbits commonly scampered onto the property. Dad fed and raised the bunnies they left behind.

That I am using past tense to describe my dad is bothersome, if not plain soul-wrenching. But his current environment forbids me to use present tense. As of now, he cannot do any of the things I mention. He cannot be himself. Nor can he be “Phil Spector.” He is a prisoner, and this is to be no one in the cruelest and most isolating way. Everything hurts.

I don't know of any other biopic – or even a documentary – of a famous, living person that is titled with the subject's name alone. That Mamet has titled his film “Phil Spector,” offering not even a subtitle as a buffer, suggests that it is a comprehensive depiction of my father – or at least, of the noir alter ego with whom the public is so sensationally acquainted.

But this is evidently not the case. HBO has gone to great lengths to separate itself from the "bio" element of “biopic,” even introducing the film with an on-screen card that splits the thinnest hair: "This is a work of fiction ... It's not 'based on a true story.'" Oh, OK. So why isn't it called "Bill Shector"? Why did Al Pacino do his thespian damnedest to replicate my dad's singular looks and manner?

HBO wanted it both ways. It wanted the lurid appeal of a famous murder trial along with a well-recognized “genius.” (I don't disagree with the genius prognosis, but I'm troubled by the naive opinions the accolade has brought my father, promoting the careless thought: “Geniuses like him aren't normal people. They go crazy and kill innocent women!”) It wanted buzz and, perhaps most important, a dynamite catalog of music that my dad generated. But HBO also wanted to present a legally safe work, and it wanted Mamet to be able to fully exercise his talents, which are in the realm of fiction. Welcome back, bad kind of dizzy! This isn't good news. This is commerce.

As of now I refuse to watch the film — not just because it's glaringly (but, you know, not really) about my dad, but because I don't approve of its ethics. Reviewers suggest it raises reasonable doubt regarding the conviction, which is encouraging, but that does not forgive the manipulative intent of the film nor the thievery of my father's name, which is half of my own. Moreover, if Mamet is stating that “Phil Spector” is, as far as his work is concerned, a fictional character, then for whom is the reasonable doubt raised — my dad, the real prisoner, or a literary fabrication, which is to say, nobody at all?

Nicole Audrey Spector is the writer of the humor novel "Fifty Shades of Dorian Gray" and is a regular contributor to the New Yorker's nightlife section, among other publications. She lives in Brooklyn with her dog.