The GOP could take the Senate in 2014. If the justice wants to be replaced by a liberal, now's the time to resign 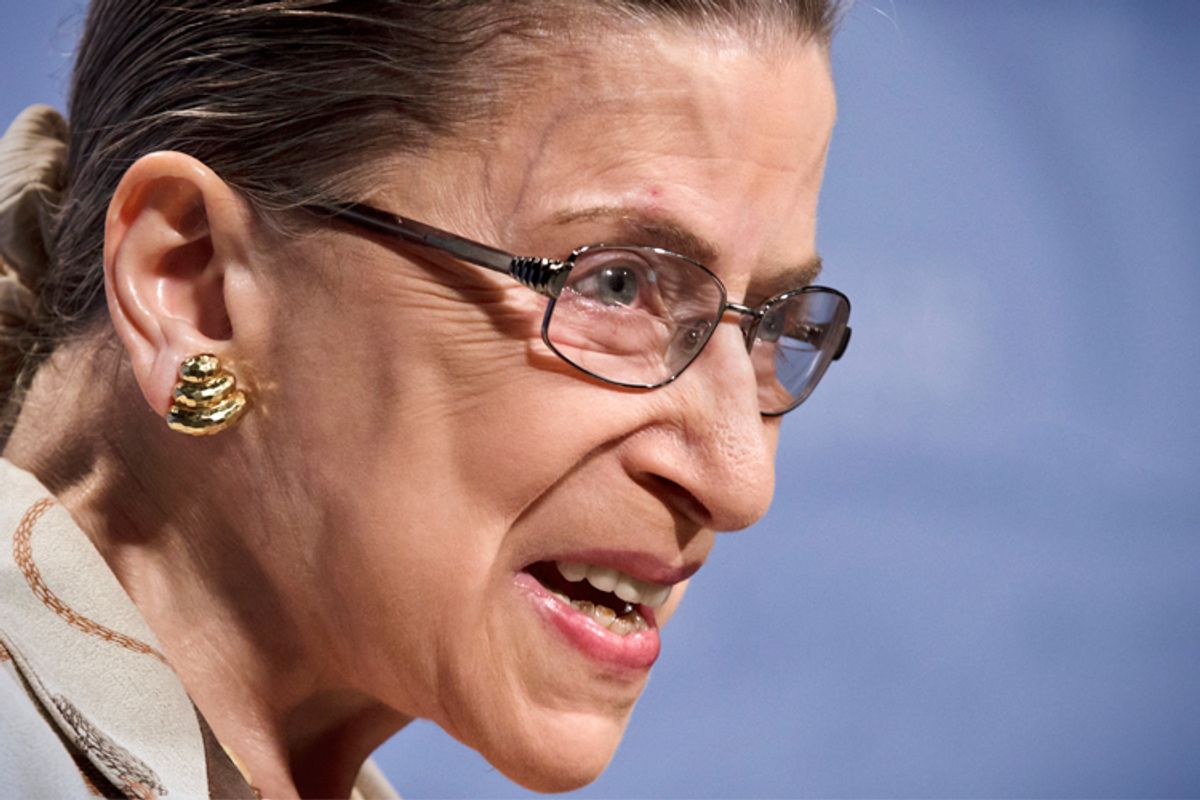 It’s time for Ruth Bader Ginsburg to step down.

Retiring and giving up her final years on the nation’s high court is a lot to ask from Ginsburg, who has been a liberal hero for many years. But just as she was a liberal hero before serving on the Supreme Court, she can be a liberal hero again by leaving it.

This is all pretty straightforward. Ginsburg is 80. Her health is apparently fine now, although she’s a two-time cancer survivor. There’s every possibility she could not only continue in office beyond the Barack Obama presidency but that she could survive even eight years of a Republican in office after that, if that’s what’s in the cards.

And yet: “Every possibility” isn’t good enough. Ginsburg will turn 84 soon after Obama’s successor will be sworn in. Realistically, anyone planning for the future has to assume there’s a 50 percent chance of that successor being a Republican.

Moreover, the simple fact is that most Republicans will support a filibuster against any Supreme Court nominee. Right now, the 55 Democrats (including two independents who caucus with the Democrats) may be enough, combined with a handful of Republicans who are moderate enough or simply oppose knee-jerk filibusters, to get a nominee confirmed.

It’s only going to get harder, however. Next year is an election year, and Republicans fearing a Tea Party challenge will be even more reluctant to let the Kenyan socialist in the White House have a third Supreme Court nominee confirmed. And after that, the odds are pretty good that Democrats will lose ground in the 2014 elections and that they could even lose their majority in the Senate altogether.

And then every month that goes by brings us that much closer to January 2017 and makes it that much easier for Republicans to just implement a confirm-nobody strategy to run out the clock.

No, if she’s going to resign while Barack Obama is still in office, the time to do it (conditional on confirmation of a replacement) will be this year. And if she wants to support the ideals she’s worked for, turning the seat over to a younger liberal is really the only reasonable option.

The truth is, there’s not really much of a history of these sorts of decisions. Retiring in order to preserve the seat for an ideologically similar justice requires two things: strong partisanship and ideologically polarized parties. Until about the 1980s, those conditions rarely held in American politics. What’s more, it requires issues clearly within the jurisdiction of the courts, and which predictably divided the parties – something that didn’t necessarily hold during previous periods of high partisanship. But all of that certainly does apply today.

Of course, we don’t know whether any recent retirements were driven by an effort to be replaced by a justice with a similar philosophy. Note that both William Brennan and Thurgood Marshall retired during George H.W. Bush’s presidency, both of them faced with declining health, even though both lived until the Clinton administration.

However, it does seem that politically based retirements are more common these days. For one thing, far more justices are leaving the bench voluntarily than used to be the case. Robert Jackson in 1954 was the 15th justice to die in office during the 20th century, but since then only one active justice – William Rehnquist, in 2005 – has died. So, to begin with, resignations in general are more common.

Simply looking at the year they left the bench, among those who may have timed their retirements for political reasons have been David Souter (retired in 2009), John Paul Stevens (2010), Harry Blackmun (1994), Lewis Powell (1987) and Warren Burger (1986). Sandra Day O’Connor was quoted as rooting for George W. Bush to win the closely contested 2000 election so that she could be replaced by a Republican president; she subsequently was willing to risk one more presidential election before actually retiring in 2006.

Of course, even under present conditions, ideologically similar justices are hardly identical. There’s more to the job than merely registering a vote. But that vote is awfully important. If Ginsburg waits even another year or two, she risks having her replacement chosen by the next Republican president – and that could be the end of many of the things she’s worked her life to achieve and protect.

Ready for the kicker? If she really feels up to another several years on the bench, she could always ask Obama to appoint her to the D.C. Circuit Court. It has four openings, and he currently only has one nominee. The truth is, it’s not especially likely he’ll be able to fill all four of the seats given GOP obstruction. What’s more, she would almost certainly be confirmed: Democrats, of course, would vote for her, and Republicans would be unlikely to block someone who surely wouldn’t occupy the seat for all that long.

Regardless: It must be a terribly difficult decision to make, but it’s time for Ruth Bader Ginsburg to go.