"A Thousand Pardons," and just as many plot contrivances 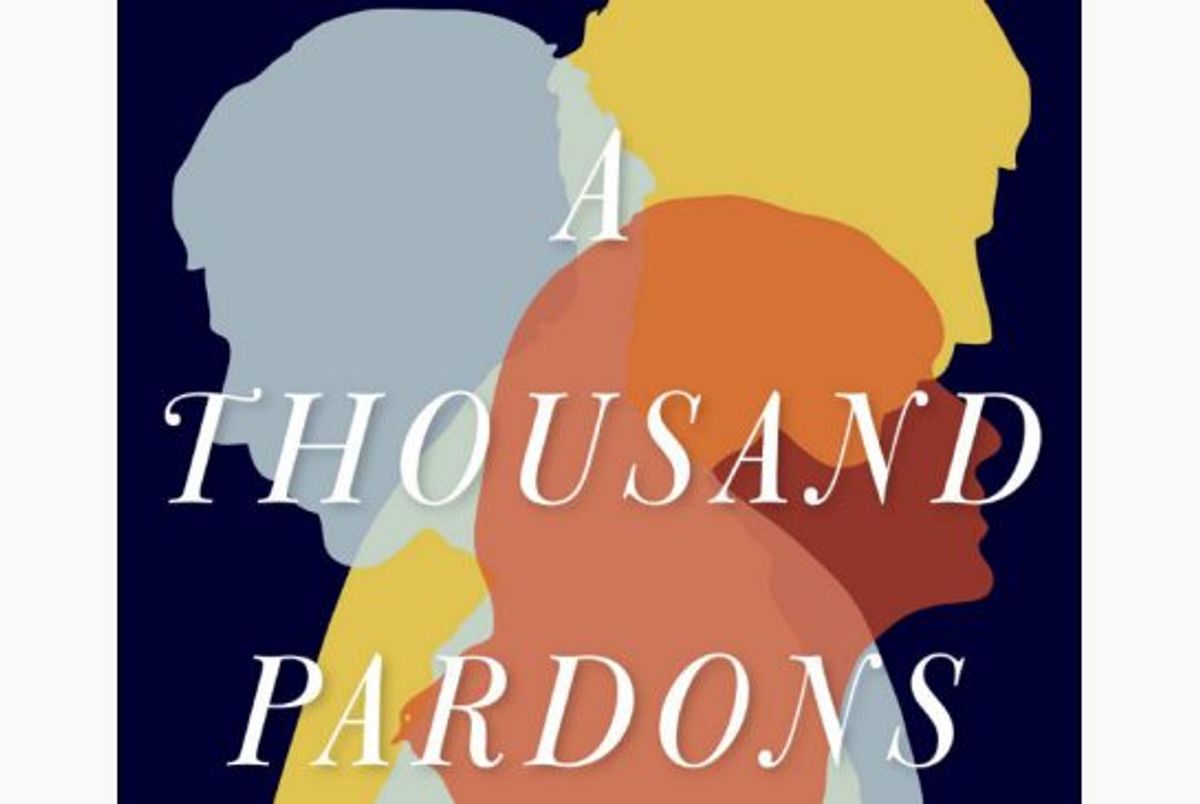 THE OPENING LINE of Anna Karenina is over-quoted, but I’m going to quote it again in order to disagree with it: “Happy families are all alike; each unhappy family is unhappy in its own way.” I don’t think so, really. What a strange world that would be, populated by a smiling corps of uniformly happy families and a boggling, infinitely varied spectrum of unhappy families. Why should unhappiness be so privileged? Unhappiness can be just as banal as happiness; happiness can be just as odd and complicated as unhappiness. What about the families that don’t fit neatly into either the happy or unhappy column? And there are so many people out there busily making families that probably no family does anything in its own way, which is irrelevant anyway because we can’t help but perceive our own experiences as unique. But maybe all Tolstoy meant was that human contentment can appear dull and uncomplicated from the outside. Or maybe I’m overthinking this, and he was just taking advantage of having an omniscient narrator to start his novel off with a zippy aphorism.

At the very least, there exist recognizable genres of familial unhappiness. The Armsteads, the family at the center of Jonathan Dee’s new novel A Thousand Pardons, fall into the category of Well-To-Do Suburban Discontentment. They live in a nice Westchester town, in a nice house with an Audi in the driveway. Ben commutes to the city where he practices trust and estate law at a white-shoe firm. Helen is a stay-at-home mother to Sara, twelve, whom they adopted from China as a baby. But success and stability have not brought fulfillment. When the book opens, the Armsteads are three drifting, closed-off people going through the motions of being a unified family. One of these motions is marriage counseling (although Helen and Ben hide this from Sara, calling it “Date Night”), and during a session, Ben breaks:

“It’s not that Helen herself is especially boring, I don’t mean that, or that some other woman might be more or less boring. It’s the situation. It’s the setup. It’s not you per se.”

Ben’s torrential confession of boredom goes on from there but does not yield anything unexpected; he is having a classic, if unusually acute, midlife crisis. The path of least resistance is to continue on as a dutiful husband, father, and breadwinner, but that path leads too directly and unmistakably to death for Ben’s taste, without any surprising twists and turns to distract from and obscure his (and everyone’s) ultimate destination. This is not a midlife crisis, he says, betraying the exceptionalism he has granted himself: it’s an existential crisis. He is too self-absorbed and too intent on instilling his panic with gravitas to see that midlife crises are existential crises. As parents die and youth evaporates, death suddenly looms large, triggering a justifiable rebellion. We flail against the poignant reality that our days are numbered and against the knowledge that the choices we make while living those days will inevitably narrow the scope of our experiences.

Buying a yellow Porsche or abandoning one’s family doesn’t change the fact that the dimensions of any given life will be finite in both length and breadth. It’s not random coincidence that Ben’s particular form of unhappiness — one that seems most often introduced to a family by the man of the house — seems familiar. The question what else is there? is legitimate and there is no satisfying answer. The answer is everything and also nothing.

Helen doesn’t leave Ben immediately — she feels that would make things too easy for him — but waits, assuming he will eventually take action. He does so in a spectacularly self-destructive fashion by becoming infatuated with a young, hot summer associate and pursuing her far beyond the boundaries of good judgment. Yadda yadda yadda, he winds up drunk, bloodied, unemployed, charged with attempted sexual assault, and divorced. He goes to rehab and, later, minimum-security prison. Helen goes to New York to find a job, which she does with somewhat implausible ease at a two-bit PR firm, and she and Sara move into a one-bedroom city apartment to begin a new life.

Despite having no training in her new field, Helen turns out to be a sort of PR prodigy, a natural who works on sheer instinct. Faced with a restaurant owner in hot water over a labor scandal, she “felt what she was about to say coming over her, moving in her, before she understood what it was, and with an air of total conviction she began saying it so that she could hear it too.” Helen’s tactic is to instruct her client to apologize, publicly and without reservations, even though the situation is complicated and the fault is not entirely his. If he wants to put his trouble behind him and go back to business as usual, he will apologize. “People are quick to judge,” she tells him, and “they are quick to condemn, but that’s mostly because their ultimate desire is to forgive.”

Is it, though? In that bit of dialogue, Helen sounds a little like an omniscient narrator laying down a tidy but wobbly Truth in hopes that the reader won’t peer too closely at it. I still haven’t forgiven, for example, Tiger Woods, Michael Vick, John Edwards, or Lance Armstrong, and I have no plans to, Oprah or no Oprah. Those men seem like pathological narcissists who didn’t just make one mistake but spent years getting themselves into ridiculously, inexcusably deep trouble because they are arrogant and dishonorable. My personal forgiveness makes no difference to any disgraced public figure, but the aggregate version of me is more or less the target of most PR machinations, isn’t it? Thanks to camera phones and the internet, scandals are a dime a dozen these days, as are apologies. Like many people, I am increasingly numb to both.

But A Thousand Pardons places great thematic weight on the purpose and power of apologies. Helen guides a city councilman who has been caught on video beating his mistress through a public mea culpa and then strong-arms a supermarket chain that is being sued (probably spuriously) for selling bananas with razor blades in them into the same. The head of a fancy and enormous PR firm plucks her from obscurity for his crack Crisis Management team so that she can extract apologies from such heavies as the Catholic Church. To a large extent, the novel frames Helen’s hunger for repentance as a response to Ben’s rejection and betrayal. When Ben expresses a desire to apologize to the woman who accused him of sexual assault, his lawyer tells him that he is only allowed to apologize to Helen and only in his office. Ben does. Helen does not accept.

So here is a woman who knows firsthand how laughably inadequate an apology can be, how puny and irrelevant in comparison to transgressions committed and pain caused. Not only did I question why that woman would be such an advocate for penitence as a cure-all, I doubted the efficacy of the apologies she squeezed out of her clients. I also didn’t quite buy the “You’re gonna be a star!” response she elicited from her bosses. The novel seemed to anticipate my skepticism. Of the mistress-beating councilman’s penitence, I was assured that “[i]t worked; she knew it would work, even without completely understanding why. In her faith in the tactic of total submission she felt herself delivering a kind of common-sense rebuke not just to her ex-husband and his lawyer but to legal minds everywhere.” Both clients and readers are asked to simply trust Helen’s gut, and it’s not always easy.

Dee’s style is clean and elegant without being stodgy, and A Thousand Pardons is peppered with observations that are delightful in their wit and satisfying in their sharp symmetry. Take this one about the summer associates at Ben’s firm: “They were at the very bloom of everything for which they felt destined and everything that others would begrudge them.” Or this, about Patty, a former friend of Helen’s, pretending to be nice: “The mechanics of sparing Helen humiliation and actually humiliating her were so indistinguishable that surely even Patty didn’t know which of the two she was doing, or why.” Another aspect of the book I admired was Dee’s treatment of Sara, who is rendered as a real, imperfect, conflicted person, full of corrosive adolescent scorn one minute and childlike bewilderment the next as she contends with eighth-grade ennui and a lost-soul boyfriend along with the dissolution of her family. Her feelings of isolation and displacement are treated with the same care and seriousness as those of her parents.

For long stretches of A Thousand Pardons, momentum of story and momentum of language come together, and I was completely engaged, galloping along. But as a whole, the novel feels unconvinced of itself. Technically, I suppose, Dee employs an omniscient narrator, but that external voice has no personality of its own and offers little insight or feeling of authority. The end effect is of a close third-person point of view that shifts rapidly, sometimes jarringly, amongst characters whose thoughts are perhaps too well organized. Ben, after being released from prison, reflects: “All that survived of his old life was the disgrace of its end, and there was something almost comfortable about that disgrace, about the burden of it; it seemed to be what he’d been courting all along.” While Helen has a glass of wine and signs the divorce papers, Dee inserts a clunky summary of the Armstead marriage couched as Helen’s thoughts, with the neat conclusion that she had “at some point, forgot to find anything else to want from life, and this had turned her into a boring person, a burden, a part of the upkeep, and she might have floated along mindlessly like that forever […] were it not for the fact that her lack of inner resources had driven her husband insane.” If these smooth encapsulations were delivered via a Tolstoy-style puppet-master narrator or were buried in a densely complex story, they might seem helpful, clarifying, but the streamlined structure of A Thousand Pardons and its aloof tone make them seem overly literal and final, like instructions on how to understand the characters. Likewise, the theme of apology is returned to so often and from so many different angles that it draws uncomfortable attention to the contrivances of the plot.

Maybe A Thousand Pardons was intended to offer vicarious satisfaction to readers who crave culpability. The novel, though, derives so much more interest and power from the smaller, less theme-driven story of how the Armsteads destroy and reconfigure themselves as a family. They are three people tumbling through their parallel lives, each wondering what the point of all of it is, what else is out there. In the end, like most families, they are neither entirely happy nor entirely unhappy, but they make one another less alone, which is a comfort.

Maggie Shipstead is the author of two novels: "Astonish Me" and "Seating Arrangements"