Can cancer clusters be explained? 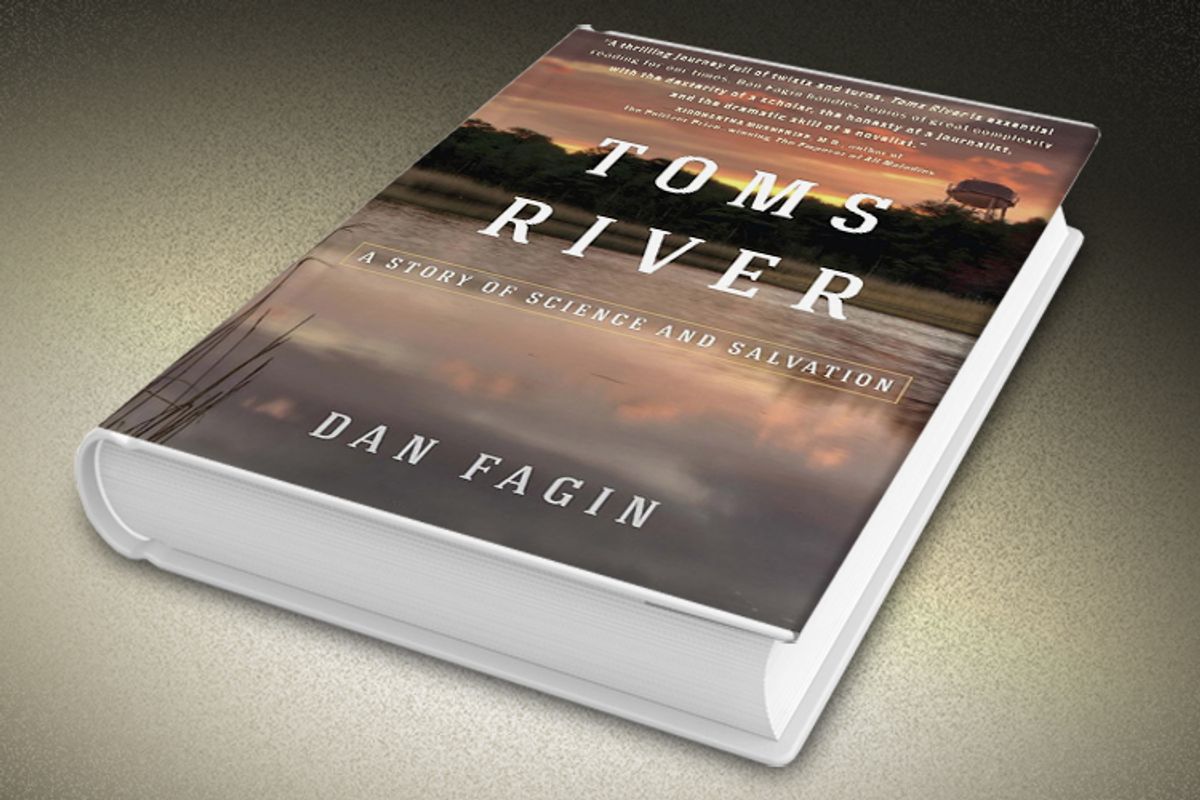 Toms River, New Jersey, wasn’t polluted in a day. Ciby-Geigy and Union Carbide dumped their wastes in this small coastal town for decades before scores of local children were diagnosed with leukemia and cancers of the central nervous system. Dan Fagin’s "Toms River" tells the story of this chemical production and disposal, of snaking plumes of carcinogens, and of factory workers and residents who cried foul while government regulators and politicians turned their backs on mountains of circumstantial evidence.

The genius of "Toms River" is that readers pretty much know who did it -- but will the perpetrators get caught? And if they do, what are the consequences? The suspense builds as Fagin, who directs New York University’s Science, Health, and Environmental Reporting Program, traverses grand canyons of chemical, medical, and epidemiological scholarship, providing a surprisingly exciting tour through the yawning gap that separates cause from effect. "Toms River" will fill you with outrage: at the blatant abuses of the bad old days, the weak response of government and -- worst of all -- the knowledge that it could, and most likely will, happen again.

I spoke with Fagin recently about why the story of Toms River should concern us all.

Your book shows us that it’s incredibly difficult to prove causation in residential cancer clusters: Toms River was only the second such confirmed case in the nation, after Woburn, Massachusetts (the cluster immortalized by "A Civil Action"). Is that as it should be, or are we missing a lot of clusters?

That question is at the core of the book. In the last chapter, I suggest that there are three possibilities. One is that Toms River and Woburn are just flukes and that what looks like a causal cluster is actually just a random cluster. I don't think that’s very likely. The second possibility is that Woburn and Toms River had so much exposure, and the route of exposure was clear, and it flowed freely through those water pipes for decades, and there just aren't any other places where that's really happened. Based on what I know from covering the environment for more than 25 years, I don't think that's the case at all. The third possibility is that there are many environmentally induced residential cancer clusters out there, and we're just not seeing them. There's good reason to believe that is what’s happening. We really don't do good disease surveillance in this country. Untold numbers of cancer clusters are never even detected in the first place. Nobody even makes a decision not to investigate them; it's just that we never even learn about them

Why don’t we initiate these studies? Because they’re too complicated, too expensive or because there’s too much political pressure to not look?

I think it's clearly all three of those factors. Residential cancer-cluster investigation can be very frustrating because cancer is not one disease. It's more than 150. If you look at a particular neighborhood or a particular block, you're not going to see that many cases of individual cancers. What that means is that statistically it's really hard to separate the signal from the noise. And yes, they are very expensive to do. Public health agencies today don't want to spend that money because it's expensive but also because it just riles everybody up. Then there’s the third factor: The whole point of investigating environmental cancer clusters is to identify causal factors. Those causal factors sometimes relate to specific industries, specific businesses, or specific sites. That is, of course, political dynamite.

Regulatory agencies don’t always prosecute polluters, but instead mostly issue notices of violation and consent orders (voluntary agreements between disputing parties). How did we get environmental laws that are so toothless?

The whole philosophy of environmental compliance in this country is not punitive. It's just about trying to get compliance. We treat environmental crimes as problems to be solved. The philosophy is, "Let's focus on cleaning up the situation and let people get on with business.” It's really left up to the civil bar, to trial lawyers and interveners like NRDC [which publishes OnEarth], to get the baton and try to say, "No, this is not just about how you conduct your business. It's also about injuries that you may have caused to people and the environment."

Referring to the '70s and '80s, you write that environmental enforcement was lax “then and now." Do you really feel we’re no better off today?

I don't have the empirical research to show how much better it's gotten. I do think that while the quality of our enforcement may have improved, the quantity of enforcement hasn’t improved very much. We still are starving public health and environmental regulation in this country. We're in the throes of an ideology now that sees regulation as a bad thing. As a result, regulatory agencies are under incredible budget pressures. I'm really concerned about that. But I certainly know that there's a professionalism about American regulatory officials now that there wasn't 30 or 40 years ago. That's a positive development. On the other hand, they’re very much overworked, which creates more pressure on them to not investigate cases comprehensively, to not seek any kind of criminal or significant civil penalty, and to focus just on getting the case off their desk as quickly as possible -- which usually means some kind of a weak administrative action.

Do you think the Toms River settlement -- which left some of the 69 families involved with more than $500,000 but others with less than $100,000 -- will have a chilling effect on other cancer-cluster investigations or discourage citizen activists who see what these people went through for so long and the relatively little they ended up with?

I don't think that citizens should be discouraged. I think that it was a long and frustrating process that didn’t achieve the greatest hopes of the citizens who pushed for it. On the other hand, what they did achieve was really quite remarkable. They basically compelled the state and federal government to do this big, very sophisticated piece of epidemiology which, to everyone's shock, found a causal relationship between some environmental exposures and a true cancer cluster. I think people should see "Toms River" as both a cautionary tale and a story about what can be accomplished with sufficient determination.

One of the important themes of my book is that there was nothing predestined about the Toms River story. Sometimes we say, “Well, eventually the truth will come out, one way or the other.” I don't think that's the case at all. I think there's lots of truth that never comes out. There are many, many ways that the Toms River story could have been buried forever. The only reason it wasn't is because at key moments people said, "You know what? I'm not going to let this thing drop. I'm going to risk maybe getting some pressure from my job or from my bosses, from my neighbors, from my community. I don't care because I think this is the right thing to do."

You live on Long Island, where there have been some concerns raised about drinking water quality. Do you drink your tap water?

I look at my semi‑yearly statement from the water company pretty carefully, and I do think that the risk is reasonable where I live. But I want to make the point that while individual action is very important, the more that one learns about the ubiquity of environmental risk, the more one realizes that there's so much that consumers could or should be aware of that it is just impossible to keep track of it all. It's not reasonable to expect consumers to make those decisions in the absence of some kind of larger government structure. The best environmental regulation by far is at the federal level. I try to make reasonable decisions about risk. But even knowing as much about toxicology and epidemiology as I do, I find it sometimes bewildering to try to keep everything straight.