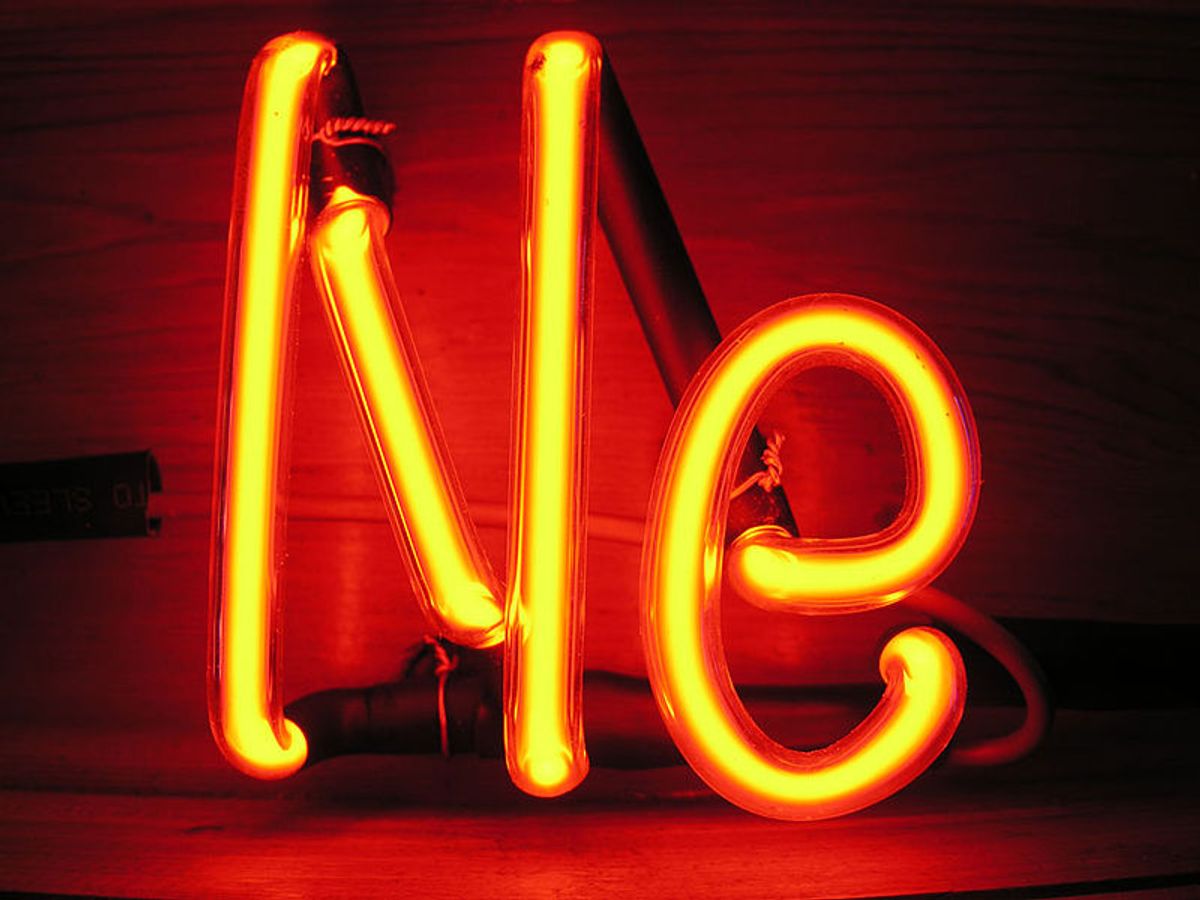 “What, in the end, makes advertisements so superior to criticism? Not what the moving red neon sign says — but the fiery pool reflecting it in the asphalt.”

BEHIND A PLYWOOD PARTITION in Clifton’s Cafeteria in downtown Los Angeles, a neon light has flickered unseen since the Great Depression. Purchased by Clifford Clinton in 1935, the cafeteria is governed by “Clifton’s Golden Rule,” a precept that ensures that everyone who enters can eat, even those unable to pay in full. Clinton transformed what was formerly Boos Brothers’ Cafeteria into a space that reflects time he spent in the Santa Cruz mountains as a child. A cascade of water spills into a handmade stream that winds its way through plastic redwood trees; on the walls, numerous paintings of forest scenes lit by neon emphasize the idea and its artifice.

In 1949, one of these illuminated tableaus was obscured when the restroom that contained it was renovated and transformed into a storage area. The electricity, however, was never disconnected, and the neon tubing has glowed in the darkness for the past 62 years, costing Clifton’s a cumulative 17,000 thousand dollars in electricity bills.

Neon is an ostentatious element, which is what made it ideal for advertising. At the beginning of the 20th century, few other entities emitted such a charismatic glow. It recalled the molten metal of a forge, the sparks of gunpowder, and the phosphorescence of radium — but unlike these more dangerous illuminations, it was safely contained within a glass tube whose sole purpose was to capture one’s attention, to the exclusion of all else.

As Christoph Ribbat tells us in "Flickering Light: A History of Neon," neon was almost immediately appropriated for marketing. Discovered at the end of the 19th century, neon (derived from the Greek for “new one”) had been ubiquitous in Europe since 1911, when Georges Claude, a French chemist, engineer, and entrepreneur, introduced the neon tube to Luna Park, a Parisian iteration of the original Coney Island amusement park. A year later Claude’s close friend, Jacques Fonseque, began promoting the use of neon for advertisements, and Claude patented a “non-corrosive electrode” that made neon tubes inexpensive to make and therefore widely accessible.

An able chemist in his own right, Claude piggybacked on the discoveries made by William Ramsay and his assistant Morris Travers in London in 1898. In the four years prior to the discovery of neon, Ramsay, with the help of Lord Rayleigh (John William Strutt), had discovered argon, helium, and krypton — all of which, like neon, are extracted from air and immune to chemical reaction — but it was neon whose effect was most impressive: “The blaze of crimson light from the tube told its own story,” Travers wrote of the discovery, “and it was a sight to dwell upon and never forget.”

Ramsay and Travers found the reaction interesting enough, but Claude, keenly influenced by the science fiction of Jules Verne, “could not get over the effect.” He experimented with the intensity of the light by manipulating the diameter of the tubes, as well as the color by painting their interiors. Claude’s electrode eventually made neon universally accessible and Claude globally famous, and by World War II he had become a prominent political figure as well, stridently coming out in favor of Germany.

After the liberation of France in 1944, George Claude, arguably the person most responsible for neon’s widespread fame, was sentenced to life in prison for his collaboration with the Nazis. Released in 1950, when he was 79 years old, Claude lived the rest of his life in obscurity.

A few blocks away from Clifton’s, on the corner of Olympic and Hope, the United States’ very first neon signs appeared in 1923 to advertise an automobile. High above the dealership, two rectangular frames, outlined in electric blue, framed the word “Packard” in bright orange script.

Following their arresting initial appearance in Los Angeles, neon signs began to advertise churches, gas stations, hotels, and, after the end of Prohibition, liquor. Cheaper and less intrusive than electric lights, neon offered urban areas and small towns the prospect of sophistication and visual diversity, even during the Great Depression. Many initially found the flicker and glow of neon to be “warmer” and “less frenetic” than electric light. It made public space feel more domestic and, at the same time, more holy.

Neon’s vogue was brief, however, reaching its height in the 1930s. In some ways, it was a victim of its own success. Perceived at first as a symbol of prosperity and security, neon’s ubiquity soon began to suggest a society devoted to “surface” and “spectacle.” Theodor Adorno thought neon emblematic of the mass production of experience and presented art as the antidote: “The more the all-powerful culture industry seizes for its own purposes the principle of illumination and corrupts it in the treatment of men for the benefit of the perduring darkness,” he writes in "The Philosophy of New Music," “all the more does art rise against this false luminosity.” For Adorno and others, neon was a symbol of false enlightenment and the reduction of the modern world to mass-produced commodities — although, ironically, neon itself was an artisanal product, handcrafted in individual workshops. At the peak of its popularity, there were over 5,000 neon workshops throughout the United States.

But for many, neon signs indicated not just products, but possibility. Nowhere was this more apparent than in Las Vegas, where neon routinely transformed the prosaic into the fantastic. Almost every surface emanated something tempting and improbable, suggesting the unlikely existence of the city itself. Neon “set the city ablaze,” in Ribbat’s words, making it into an enticing mirage in the desert of American culture, inviting irony and interpretation. An account of a trip a group of Yale students made to Las Vegas in 1968, "Learning from Las Vegas," published in 1972, caused a worldwide reassessment of the city’s landscape. They highlighted the artistry involved in making neon signs, comparing Las Vegas to both Versailles and Rome. Neon, for these scholars, represented a rejection of a culturally determined sense of what is good and beautiful, and an invitation to find significance in the formerly negligible and sordid.

For artists of the 1960s like Bruce Nauman and Lili Lakich, neon’s association with kitsch and urban blight made it provocative material. In 1967, Nauman wrote, in a neon spiral, “The True Artist Helps the World by Revealing Mystic Truths,” asserting that this piece was just another sign, not a work of art. Lakich worked with neon to produce emotionally charged works that never got her much recognition. In 1981 she channeled some of this passion into creating the Museum of Neon Art in Los Angeles, a space once situated downtown and currently closed as it transitions to inhabit a larger space in Glendale. While her contemporary, Dan Flavin, became known for working with neon, his primary material was not neon but fluorescent tubes whose interiors he painted with different colors. These were mass produced, not individually crafted, and emitted a flow more muted than the flash of neon.

Ribbat, a professor of American studies at the University of Paderborn in Germany, and the author of books about Las Vegas and the photographer Robert Frank, is particularly good at situating the novelty of neon within its larger historical context, elucidating how its development resonated with and reflected the shaping forces of the 20th century. He is most interested in refuting the Adornian argument that the “false luminosity” of neon diminished reality rather than adding to it, asserting “[a] closer look at the neon tube […] discloses a technology of modernity which did not turn everyday life into a virtual reality.” Rather, Ribbat argues, neon added to the available experience of the world, in much the same way that certain illuminated manuscripts clarified and intensified the word of God.

Sometimes Ribbat’s book, useful as it is, wants the cohering energy of the evangelist. While it is clear where his sympathies lie, it is easy to get lost in the numerous perspectives he presents, so that sometimes it feels as if one is reading an accumulation of instances that point to neon’s cultural significance, rather than a resonant argument for why we ought to care about it. Luckily, other people have undertaken similar projects of historicizing and preserving neon. The artist Rudi Stern founded Let There Be Neon in New York in 1972, a gallery that celebrated the history of neon; in 1979, he published a book with the same name. Len Davidson published "Vintage Neon" in the 1990s and is also the founder, president, and chief preservationist of the Neon Museum of Philadelphia.

In Las Vegas, the Neon Museum was established in 1996 by the Allied Arts Council of Southern Nevada and the City of Las Vegas. (It reopened on 2012 as an independent nonprofit.) In an area named Glitter Gulch, the museum displays over 150 signs from “old Las Vegas,” most of which come from the “boneyard” of the Young Electric Sign Company, where many signs, exposed to the elements, have been rusting away. Among these is the sign for the Stardust Resort and Casino, where people came to gamble and watch the atomic tests occurring in the surrounding desert. As Edward Rothstein wrote in his review of the museum for The New York Times, “it has been suggested that the original pinkish lettering matched the color of Vegas’s radioactive dust.”

Outside of museums, however, neon is becoming quite rare in the United States; Chinatowns are some of the last strongholds. The old North American Chinatowns in Vancouver, Los Angeles, San Francisco, and New York took on the characteristics of Hong Kong, lit up with lanterns and neon. Now much of the neon has leaked away, and the signs are flickering, if not completely out. Hong Kong itself, however, is still an “existential neon experiment.” At night the scaffolding that suspends the numerous signs in midair along almost every street is invisible, and the neon intermittently enveloped by fog. The city feels as if it is perpetually intimating the existence of something more, just beyond sight.

Neon, as Ribbat notes, has been characterized by contradiction since its discovery: touted as a symbol of civilization’s progress and of its decline, of democratic diversity and totalitarian centralization, of pop slickness and punk scuzziness. The same neon signs initially used to promote and represent prosperity, as they began to age, “became a symbol of urban decay, their light shining above all on those looked down upon as losers.”

The confusion over what neon represents is unsurprising, as the element itself is something of an illusion. While neon does emit the “blaze of crimson” William Travers admired in 1898, most of the other colors we think of as neon are actually emitted by a mixture of noble gases. In the passage from his essay “One-Way Street” quoted above, Walter Benjamin mistakenly describes neon as “moving.” In fact, it doesn’t move, though it moves us. The illusion of action is part of what makes neon so attractive, and it is an illusion most of us will maintain. After all of our technological advances, it is still compelling to catch fireflies in a jar.