Honey, we're praying for you

My parents can't handle the fact that I'm gay, and we'll never agree on religion. But I've found acceptance anyway 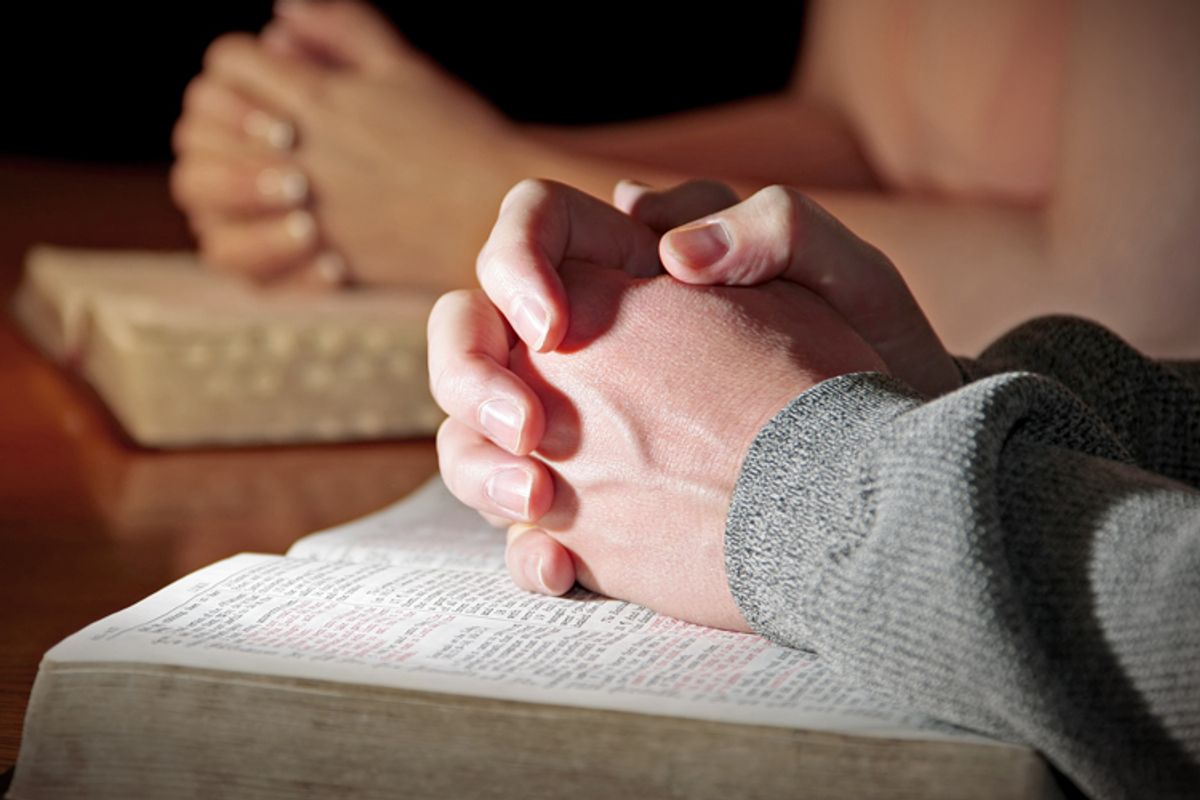 “Honey, we’re praying for you.”

This is how my mother ends every email she sends me. Typed in italics and peppered with smiling emoticons, Mom’s electronic missives are as precious as she is — as earnest as the Empty Tomb Cake she bakes each spring on Good Friday. An edible replica of the cave where Jesus was buried after dying on the cross for our sins, the Empty Tomb Cake is the standard passion week centerpiece in my childhood home. It is frosted in gray, surrounded by a field of green coconut grass, and finished off with a Hostess Ding-Dong as the stone that was rolled away. On Saturday night, after everyone goes to bed, Mom steals into the kitchen under cover of night and rolls the Hostess Ding-Dong away from the door of the Empty Tomb Cake, then retouches the frosting. On Easter morning Jesus has risen — right there in the middle of the kitchen table.

As sweet as Mom’s loving messages and born-again baked goods appear at face value, there’s a silent threat in “we’re praying for you” that sticks in my craw. I came out to my parents the first time at the age of 19 when I was kicked out of the Bible college where my dad taught. Since then, their ongoing prayers for my “deliverance” from “Satan’s lie of homosexuality” have continued unabated in the presence of my four younger siblings and the unsuspecting wait staffs of Olive Garden restaurants nationwide. Indeed, my parents offer a never-ending stream of supplication to a God they’re certain is testing them with a son who has been blinded to the righteous pursuit of a female partner by the penis-shaped temptation of Satan.

“We’re praying for you” isn’t a harmless afterthought. It’s not a pleasant wish for my general well-being, continued physical health or financial security. No, my mother’s “we’re praying for you” is an italicized baseball bat, a silent plea for God to change her oldest son from something abhorrent and abominable back to the fresh-faced young man who dated the captain of the Bible college cheerleading squad, before it was discovered he was also sleeping with the captain of the boy’s soccer team.

Of course, Mom wouldn’t say that. But then, as far back as seventh grade, she and Dad have rarely been very articulate when it comes to the issue of my sexuality. My next-door neighbor at the time Wes Green, on the other hand, had no problem calling things exactly what they were.

I was the accompanist for the junior high boy’s choir at my Christian school back then, and one afternoon as I returned from the piano to take my seat with the baritones, Wes snickered a single word under his breath:

It wasn’t loud enough for our teacher to hear, but the group of boys sitting around us laughed while my cheeks burnt with embarrassment.

We’d moved into the house next door to the Greens several weeks prior so Dad would have a shorter commute to the Bible college. Our new backyard held a sparkling swimming pool, while the Greens’ featured an old El Camino the color of primer with four flat tires. Wes and I were both new students in our seventh grade class the next week. I was coming from a Christian school across town, but this was Wes’ first time at a private school, and he was being held back.

“Wes is dyslexic.” Mom had whispered the word. “I want you to be a good example of Jesus’ love and help him out as much as you can.”

Mom sent me outside to shoot hoops with Wes each time he asked if I was home, often interrupting my piano practice. Due mainly to my lack of skill, basketball bored me. I began hiding when Wes rang the doorbell. Mom would find me in the garage cowering next to the deep freeze, or behind the dryer in the laundry room. Finally, she gave up on forcing me to go outside, and began inviting Wes to come in. One afternoon he walked into the living room and found me sitting on the couch looping a slender, metal hook through a spool of silky string.

“What are you doing?” he asked.

“Where’d you learn to do that?”

“My grandpa taught me.”

After 40 years of smoking ended in emphysema, my mother’s father had retired to his La-Z-boy recliner with an oxygen tank and a penchant for string craft. Papa spent hours cross-stitching elaborate pictures of a realistic Jesus above Bible verses rendered in complicated script while watching Hulk Hogan and Andre the Giant on television.

Watching TV at Nanny and Papa’s was a big deal. Mom and Dad had gotten rid of our television at home when I was a little boy because I cried when they turned off the cartoons. “Cartoons are nothin’ but violence,” Mom would say. “All that hittin’ and kickin’ doesn’t please the Savior.” So, at the age of 4, I couldn’t tell you much about Bugs Bunny or the Road Runner. I could tell you how to crucify a man.

Wes crucified me at school the day after he saw me crocheting by shouting two words across the seventh grade boy’s health class: “Aaron KNITS.”

Even the teacher laughed, and I knew I was doomed. “You knit?” he said as if Wes had announced I had grown breasts.

“I crochet!” My retort was high-pitched with horror, but even as the words left my lips, I realized my mistake. It was fruitless to attempt this distinction in a group of young men who considered Funions delicious and flatulence funny.

The next day in choir when Wes called me a fairy, I felt the same hot frustration well up inside of me, and that night I cried as I told Mom and Dad what had happened. Dad decided it was time to take action. He straightened his tie and calmly announced:

“We’re going next door to pay the Greens a visit.”

“No! That will just make things worse,” I protested, realizing too late I had not thought this out very well at all.

Mrs. Green was startled to see me standing on her porch with my parents, but she smiled nervously and let us all in. Their whole house smelled like fried food, and Mr. Green appeared in his full beard and indigo work shirt, his name stitched across the front. Once we were gathered in the living room, Dad led us in prayer, asking God for guidance, while I tried not to throw up from anxiety. Telling my parents what was really going on with me had been a terrible mistake, I decided. Then, Dad said, “Amen,” and it got even worse.

“Aaron, why don’t you tell us all what happened at school today.”

I couldn’t look at Wes, but I could feel his eyes boring into me.

Mr. and Mrs. Green both begin to chastise Wes, but Dad held up his hand in a call for silence. “Is this true, Wes?”

Now it was Wes who turned crimson, and to my astonishment began to cry. “Aaron thinks he’s so much better than me,” he sobbed. “He’s always bragging about getting better grades than I do in science and English.”

Wes was right on both of these counts, and it dawned on me as I sat there watching him cry that he was right about one more: I was a fairy.

That’s the tricky thing about bullies: They’re often telling the truth. It’s not what they’re saying — that you’re fat, or black, or feminine — it’s how they’re saying it; it’s the hate behind their words, the fact that they see the truth of the situation as a problem.

Wes made tearful promises not to call me names, especially not that name. Again Dad prayed. Again we marched across the driveway, and that night as I slid between clean sheets in a house that smelled of Pine-Sol, and nutritious food, and righteous indignation, I thought about what had just happened.

Mom and Dad also had a problem with the truth of this situation. Instead of saying, “Son, we love you no matter what,” they decided to march next door and let it be known they agreed with Wes: that even the idea of me being gay was a huge problem. Such a huge problem, it couldn’t be said out loud. Ever. So they out-bullied the bully into silence. Sure, Mom and Dad were distressed about my pain at being picked on, and certainly their conscious motivation was love for me. Still, it was what my parents didn’t say that hurt far worse than the slur Wes had flung in my direction during choir practice.

By addressing the surface situation of a seventh grade squabble instead of the silent elephant crocheting in the corner, Mom and Dad unwittingly colluded with Wes. All three of them offered an unspoken message that I heard loud and clear: “Being gay is not an acceptable option.”

Several years later, when I finally came out, Mom broke her silence on the subject. “It would be easier to go to your funeral than to know you are going to spend the night with that man.” This was the fevered pitch of the bullying, the loudest it ever became. Since then, the noise has subsided along with any meaningful communication between us, buried beneath the shallow serifs of her email italics — cheerful updates about the weather in places I’ve never lived, and people I’ve never met, at churches I’ll never attend.

Growing up means learning to hold two opposing views about the same thing. It’s not that I’ve stopped loving Mom and Dad — I haven’t. It’s just that I’ve accepted the fact that they may be as powerless as I am to change. Turns out unconditional love is a two-way street, so I protect myself with a few well-placed guardrails — one of which is the relative distance of communicating with Mom mainly by text and email.

Not long ago, one of her messages arrived in my inbox while I was on the phone with my youngest brother. New York had just legalized gay marriage, and he was planning his wedding to the man of his dreams. Turns out two of three boys in our family are queer as a football bat. With odds like these it would appear that either the Almighty is ignoring my parent’s prayers on purpose, or the Mormons are worshiping the One True God.

My brother groaned when I read him the email. “Mom and Dad’s anniversary is coming up. What are you going to get them?”

“Not sure, but whatever I decide I intend to make it myself.”

“Is the 39th anniversary coral or jade?” he asked.

Aaron Hartzler is the author "Rapture Practice" (Little, Brown), a memoir about growing up gay in a born-again Christian family. You can find him trying to get Amy Grant's attention on Twitter at @aaron007.
MORE FROM Aaron Hartzler