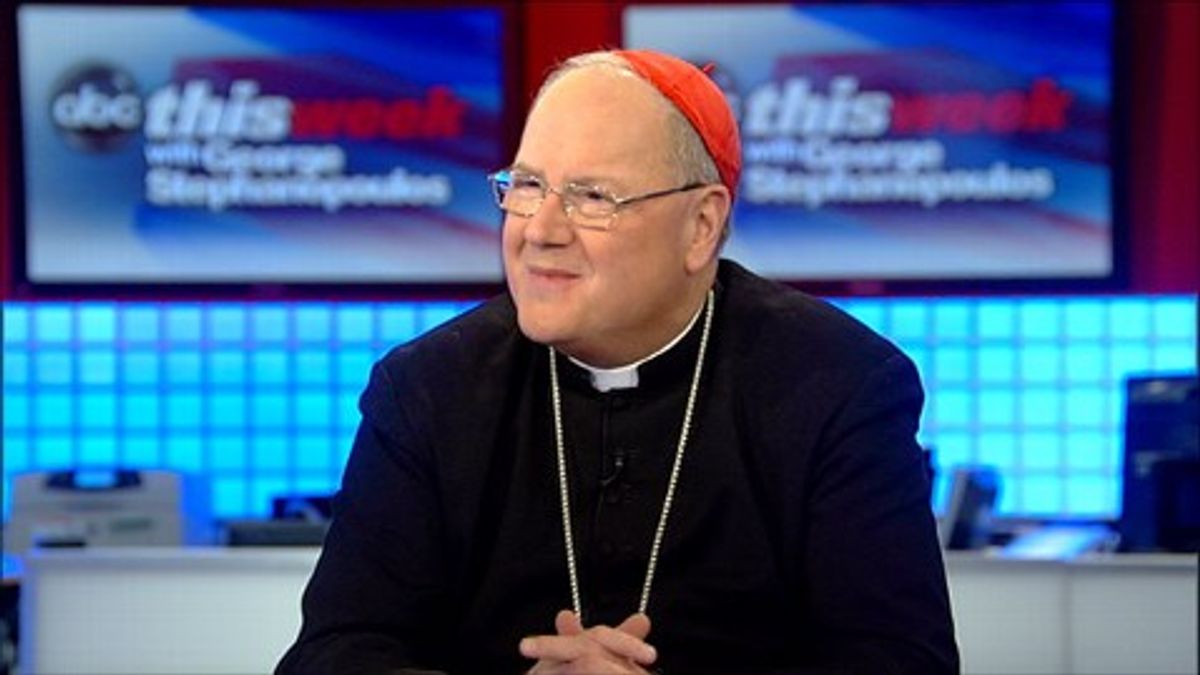 Cardinal Timothy Dolan, Archbishop of New York, on "This Week"
--

While the pope sent out a message for peace on Easter Sunday, the political shows celebrated the holiday with clergymen who brought a message for gay marriage on the heels of this week's DOMA hearings.

Archbishop of New York Cardinal Timothy Dolan stopped by ABC's "This Week" with a desire to clarify the Catholic Church's stance on gay rights, saying, "We're not anti-anybody." He said, "Well, the first thing I’d say to [gay people] is, ‘I love you, too. And God loves you. And you are made in God’s image and likeness.'"

However, he maintained that gay marriage is not recognized by the church, saying, that if you are gay, "you’re entitled to friendship," and that the Catholic Church has "got to do better to see that our defense of marriage is not reduced to an attack on gay people."

On "Fox News Sunday," Archbishop of Washington Cardinal Donald Wuerl echoed Dolan's sentiments, even likening gay marriage to divorce: "We do that same thing with people who are married, divorced and remarried. We say, you know, you're still part of the family, but we can't recognize that second marriage … and it's never been a great problem."

Another hot button issue of the morning was immigration, following Sen. Marco Rubio's announcement that the current immigration overhaul in the Senate is "a starting point for discussion" rather than a "final agreement" on immigration legislation.

But on CBS's "Meet the Press," political adviser David Axelrod said that the expansive immigration overhaul will pass: "This is a legacy item for [Obama]. There is no doubt in my mind that he wants to pass comprehensive immigration reform."

The third major issue on Sunday's shows focused on the ongoing dialogue on gun control, opened up by the Sandy Hook shootings. Gun control activist, former astronaut and husband of former U.S. Rep. Gabrielle Giffords, Mark Kelly, called for universal background checks on "Fox News Sunday." He challenged the NRA's position that background checks are burdensome, saying he filled a form out in 5 minutes and 36 seconds. Kelly also argued for restrictions that make it harder for the mentally ill to obtain guns.