Will Ware be stuck with the bill? 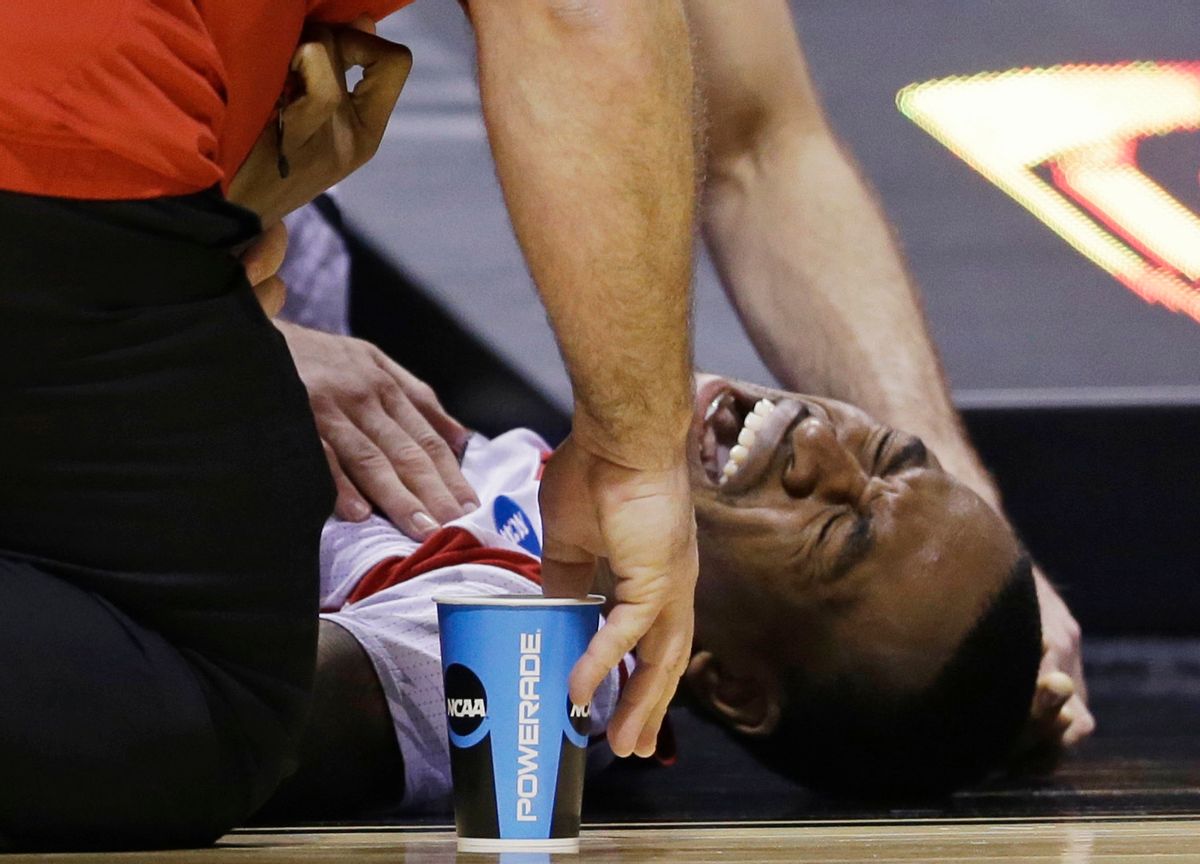 Louisville guard KevinWare grimaces as trainers look at his injury during the first half of the Midwest Regional final against Duke in the NCAA college basketball tournament on Sunday.
--

Louisville sophomore Kevin Ware's injury today in the Midwest Regional finals of the NCAA tournament will likely be remembered alongside Joe Theismann's career-ender as one of the most tragically gruesome in sports history. But that's not the only tragic and gruesome part of this episode, because unlike Theismann, who was working under a guaranteed contract, Ware was an NCAA athlete helping to generate millions of dollars for the NCAA, but not automatically guaranteed a four-year education scholarship. As in so many other similar cases, that means his injury in service to the NCAA's multimillion-dollar machine could spell the end of his financial aid and massive healthcare bills to boot.

Yes, that's right -- NCAA basketball is a $780 million-a year business that makes 1 percenters out of NCAA executives, coaches, athletic directors and college administrators. Yet that same business offers relative scraps to the players who actually generate that money.

It is certainly true that Division I NCAA basketball players get athletic scholarships. However, those scholarships often do not cover the entire cost of attending college. Additionally, many are not guaranteed four-year scholarships -- on the contrary, many schools refuse to offer guaranteed multi-year scholarships, and the NCAA's big "reform" of the last few years wasn't to mandate such a guarantee, but to merely allow it if particular schools want it.

That means that if a player like Ware gets injured while on the job at a school that doesn't offer a multi-year scholarship, the scholarship can be -- and often is -- revoked.

If that isn't bad enough, the New York Times reports that when it comes to major on-the-court injuries like the one Ware sustained, medical bills can end up being the responsibility of the student and the student's family, rather than the NCAA or the school. Indeed, the NCAA has a Catastrophic Injury Insurance Program, but the Birmingham News reports that there is a $90,000 deductible. Worse, the Daily Caller reports that while "the NCAA has its own catastrophic injury insurance, which insures individual athletes up to $20 million ... the majority (of athletes) don’t qualify."

“If you don’t lose a limb, or motion in one of your limbs, you wouldn’t be considered catastrophically injured,” Ramogi Huma, head of the National Collegiate Players Association, told the Daily Caller. “Then it’s completely up to the school, or yourself.”

While there has been some much needed talk in the college sports world of fixing this shameful reality, and while California has recently moved some of the questions into the legislative arena, there is still stiff resistance to any kind of guarantees to players. For example, the NCAA policy merely allowing multi-year scholarships came within two university votes of being overridden. Likewise, major schools like UConn have waged fights in their state legislatures to stop bills that would protect scholarships for players injured on the job.

But even if such reforms were cemented and strengthened, the fact is that these issues cannot be fully addressed until the root problem is addressed -- and that root problem is the NCAA's refusal to give players not merely decent scholarships and solid health insurance, but also a share of the revenues those players generate.

As the civil rights historian Taylor Branch put it in his landmark analysis of the NCAA, "the real scandal is the very structure of college sports, wherein student-athletes generate billions of dollars for universities and private companies while earning nothing for themselves." Those players are treated as worse than mere commodities -- because at least commodities are given a financial value. They are treated as indentured servants, who do not get their fair share of the revenues and who can be discarded if they dare get hurt doing a job for the very school that refuses to guarantee them a full college education.

Kevin Ware was a heavily recruited basketball prospect. So, along with hoping that he fully recovers from his injury, let's also hope that unlike so many other athletes, he was able to negotiate a guaranteed multi-year scholarship with Louisville, even though that school voted to ban multi-year scholarships (it cast such a vote, by the way, despite being the most profitable school in college basketball).

But whether or not Ware himself has some modicum of financial aid stability, his injury on the national stage serves as a reminder that too many athletes do not. And that is a wake-up call telling the game-watching audience that for all the excitement, enjoyment and heartbreak that college basketball generates, it is entertainment predicated on an immoral business model -- one that must finally change.