Amber Dermont: The Internet expands the way we read 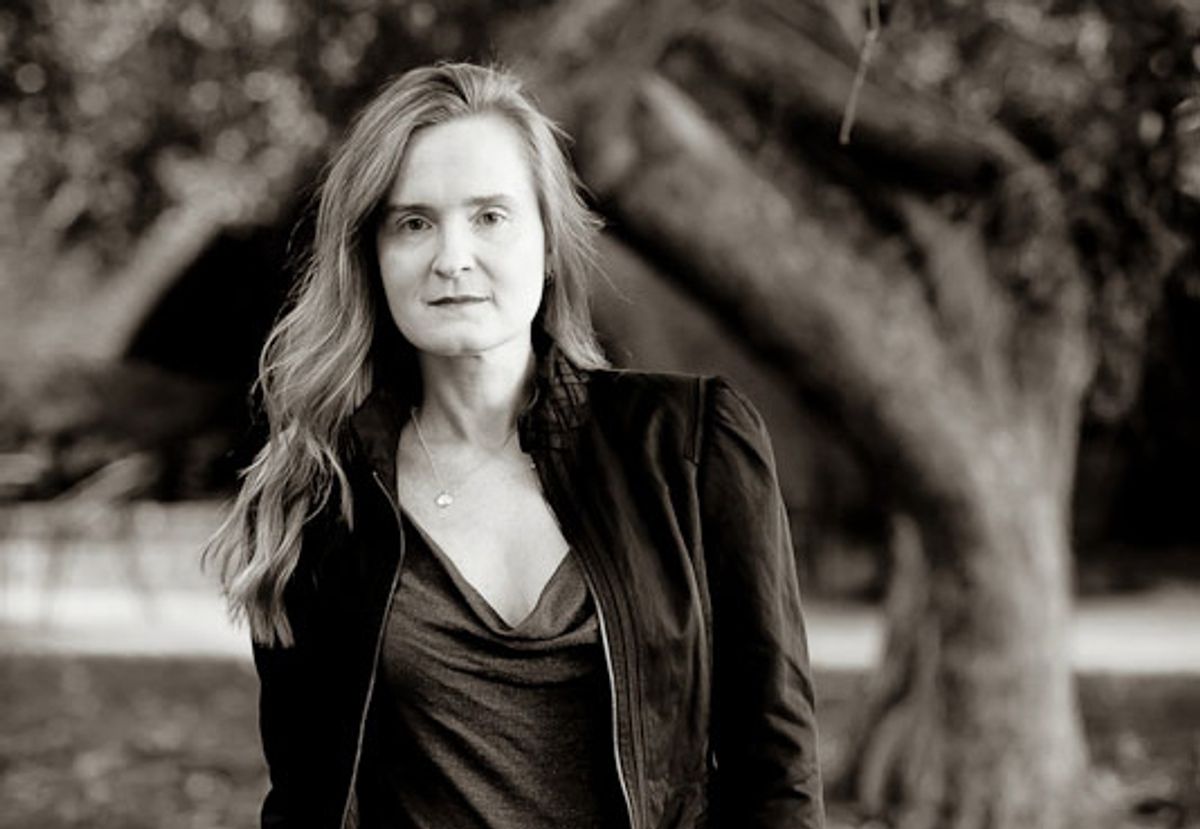 Amber Dermont is the author of the bestselling novel "The Starboard Sea" and a new story collection, "Damage Control." Caitlin Macy, in the lead review of the New York Times Book Review's “Fresh Voices” issue, wrote that Dermont “seems able to throw down a convincing story set anywhere, spun from any premise … This is not, however, one of those books whose authors appear to be casting around, trying a bit of this and a bit of that in search of a collection. [Dermont] is a deft writer, bullish on her characters, assertive in her descriptions of these specific worlds.”

I spoke with the author, who teaches at Agnes Scott College in Georgia, about the differences between her short fiction and her novel, the technological paradigm shifts with short stories, and her abiding passion for comedian Nick Kroll.

How do these stories differ aesthetically from your novel?

"The Starboard Sea" considers the mutability of sexual desire, the dangers of unchecked privilege and the lasting influence of early loss. At the center of the novel is a hurricane. I wanted to write about the storm of adolescence and the beauty and danger of the sea. I hope there are moments of levity but I know that the novel is ultimately driven by the main character Jason Prosper’s longing and search for redemption.

The great Cynthia Merman copyedited "The Starboard Sea" and "Damage Control." I thanked her profusely in the acknowledgments of the novel and she included a lovely note with the edits for "Damage Control." In the letter Merman wrote, “We had no idea you were funny. Lots of chuckles in here!”

The stories in "Damage Control" consider issues of identity and class but with an emphasis on the saving grace of humor. The characters in "Damage Control" are wounded and conflicted but they recognize the sublime irony of their dilemmas. In “Stella at the Winter Palace,” a recently widowed young woman mourns the loss of her husband by renting herself out as an escort/traveling companion for older widows. In “Camp” the administrators of an elite summer edutainment program refuse to expel misbehaving students and instead decide to punish their teachers. “Lyndon” centers on a young girl who realizes that her widowed mother is pregnant and that her dead dad can’t possibly be the baby’s father. The title story, “Damage Control,” is set in an etiquette school where the girls pay a great deal of money to attend while the boys are paid to be students. Hopefully, the setups for the stories allow for breakout moments of humor, discovery and lots of chuckles.

Who are some of your major short-story influences (as distinct from novelistic influences)?

I’ve had so many teachers, from the legendary Tim O’Brien and the miraculous Grace Paley to the quiet genius James Alan McPherson. When you allow someone to influence you it’s a way of acknowledging that you can’t possible do this work alone. Writing is lonesome and literary influences are the best company. I’d read the late Barry Hannah’s “Testimony of Pilot” compulsively before studying with him. Hannah’s soulful comments in class helped me to consider the importance of dialogue and the music of human speech. I can still hear his voice.

I’ve spent an incredible amount of time studying Denis Johnson’s "Jesus’ Son," Junot Díaz’s "Drown," Amy Hempel’s "Reasons to Live," Raymond Carver’s "What We Talk About When We Talk About Love," Jhumpa Lahiri’s "Interpreter of Maladies," Kelly Link’s "Magic for Beginners," Edward P. Jones’ "Lost in the City." Short stories lend themselves to multiple readings and I love breaking down a short story writer’s sentences, imagery and sleight of hand. As I reread these narratives, I’m discovering how the story begins, how the author grabs the reader, either by the hand or the throat, how the world of the story is created and how expectations are subverted. I’m most excited by formal innovations and narrative experimentations that pay off emotionally. My questions always when reading short fiction are, “What is the burning heart of this story? How does it burn?” The stories themselves are the most instructive teachers.

Some of my closest friends are fantastic short story writers. Holiday Reinhorn, Andrew Porter, Mark Jude Poirier, Jonathan Blum, Susan Gildersleeve, Justin Quarry and Sabrina Orah Mark have influenced me tremendously. They are with me in spirit when I write and I write always with the hope that they might be moved by the story I’m struggling to tell. It doesn’t hurt to write in honor of your influences.

What are your thoughts on writing comedically without undercutting seriousness? And who are your comedic (not necessarily in the writing world) influences?

The sexiest and most seductive thing a person can do in life is to make someone else laugh. I’ve fallen in love over a punch line, a double entendre, a pratfall, an obscene balloon animal. Comedy will never receive the credit and reward it deserves over drama because comedy belongs in the margins. Comedy comes from the most sacred, pained and misunderstood chamber of our heart. My favorite character in all of literature is the Fool in "King Lear" — no other character is as wise and caring. Comedy is deadly serious.

When I was young, I owned two great comedy albums: “What Becomes a Semi-Legend Most?” by Joan Rivers and Bill Cosby’s “To Russell My Brother, Whom I Slept With.” Like any comedy nerd, I memorized these monologues and understood that Cosby and Rivers are great storytellers and serious wordsmiths. The Joan Rivers album was actually a gift my brother and sister and I bought for Mother’s Day. In my family, humor is revered. We especially love making fun of one another. I’ve always enjoyed the extravagant cruelty of Don Rickles. There’s such an art to being the insulting court jester. The great triumph of Rivers, Cosby and Rickles is that they are all still working and are all still relevant, fresh voices.

I’ve learned so much from the British comedian Stewart Lee, whose two annotated books of stand-up comedy, "How I Escaped My Certain Fate: The Life and Deaths of a Stand-Up Comedian" and "If You Prefer a Milder Comedian Please Ask for One," are among my favorite pieces of writing. Lee understands how to deconstruct comedy conventions and tropes but with unbelievable sincerity.

Nick Kroll is one of the smartest comedians writing for television and I can’t wait for the second season of “Kroll Show.” His comedy series is quick-witted and multi-layered — the kind of show that warrants repeated viewing. Though he skewers easy targets like reality TV stars and overprivileged “Rich Dicks,” his characters are so specific and have such command over the subtleties of class, race and popular culture that they don’t feel like broad stereotypes. At the heart of Kroll’s comedy is a sharp consideration of how low we’ve sunk, how much we’ve damned our future, how willing we are to self-humiliate. That to me is as serious as it gets.

It's been recently suggested that the publication of and major attention for short-story collections is a trend of sorts, for various reasons; you were quoted in the New York Times article on the subject. Do you have any other ideas why collections have gotten much more attention in the last year or two than before?

I’m less interested in trends and fleeting literary fashion. The only thing that sells a book is word of mouth — the right recommending words coming out of readers’ mouths. With so much content competing for a reader’s attention (a reader who can quickly become a viewer or a gamer or a late-night snacker/toker) most readers rely on a few trusted sources for recommendations. Diana Capriola at Little Shop of Stories in Decatur, Ga., has personally and repeatedly put my books into her customers’ hands.

The Internet has influenced and expanded the way we read. There are a number of great online literary journals. One of my favorites is FiveChapters.com. Stories are serialized over the course of the work week. My short story “Camp” first appeared on FiveChapters.com and I’ve been introduced to the work of so many other writers by reading it, including Jennine Capó Crucet and Vestal McIntyre.

I do think that digital technology has the potential to increase the growth and reach of short fiction. Many friends downloaded "Damage Control" onto their Kindles at midnight on the release day. The immediacy of access brings the reader directly into the world of the stories. That’s pretty cool. My father downloaded the book when the clock struck 12 and kept my mother awake reading lines from my story “Stella at the Winter Palace.” I love the idea of telling my parents a bedtime story.