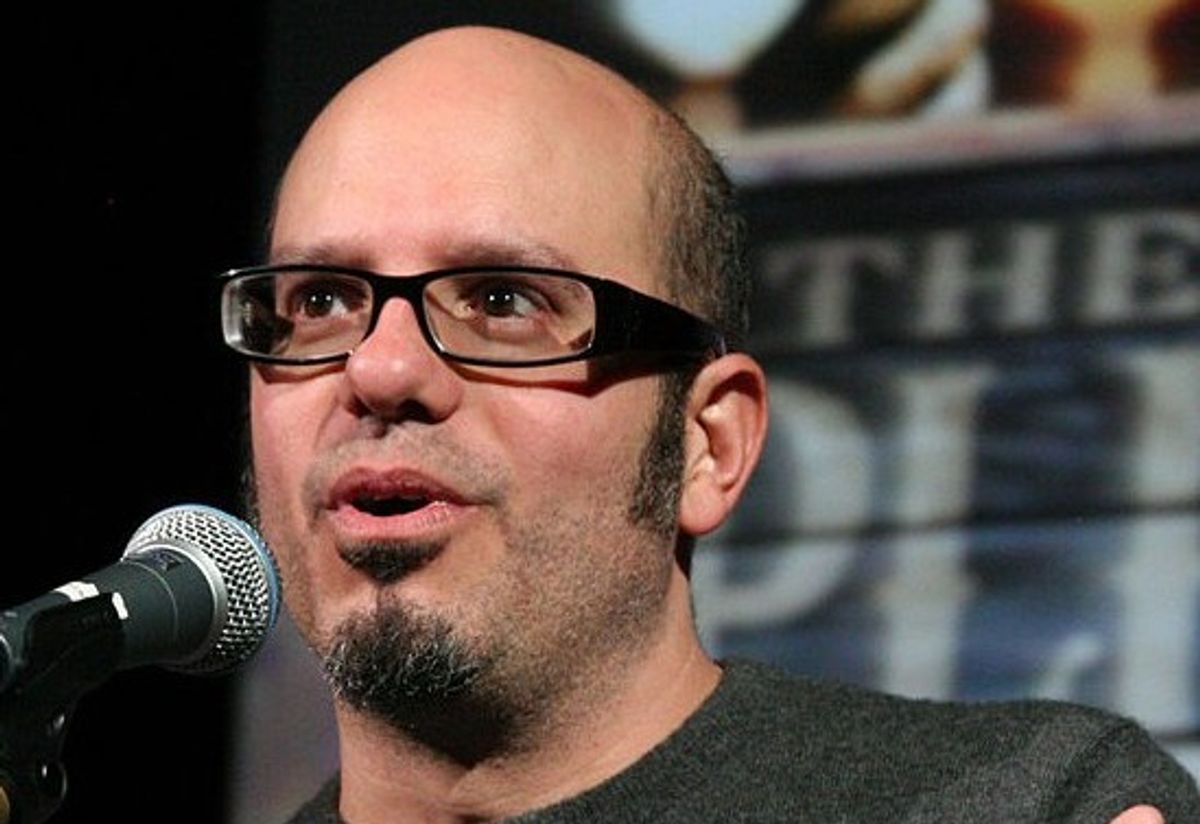 David Cross may be best known for his role as flamboyant analyst/therapist Tobias Fünke on "Arrested Development" -- but he doesn't have to like it. When comedy junkies stop him on the street, Cross tells Salon, "I want to say, 'I've done other stuff!'"

The contrast between his most famous work -- the latently gay aspiring actor and psychiatric professional he played on a short-lived sitcom -- and the "other stuff" becomes clear this spring. In the lead-up to the "Arrested Development" reunion on Netflix, Cross is to appear in a much smaller-scale project, the black comedy "It's a Disaster." Cross appears alongside America Ferrera and Julia Stiles, among others, as part of a group of 30-something navel-gazers who see their weekly "couples' brunch" only briefly interrupted by dirty bombs dropped across America. (The film is available on video-on-demand platforms now and will be released in theaters April 12.)

Cross came to prominence with HBO's now-legendary sketch show "Mr. Show With Bob and David" and has continued to dabble in television, including projects like "Freak Show" and the recent "Increasingly Poor Decisions of Todd Margaret," which critics deemed something of an acquired taste. ("It's fun at first but quickly grows tiring," said the Los Angeles Times, while the A.V. Club called its cringe-worthy humor "one long, slow, downward spiral.")

Cross pays the bills with projects like "Scary Movie 2" and the "Alvin and the Chipmunks" films. "I get that money and I do something like 'Todd Margaret,'" he said. But the movies have also given him an entirely new fan base that hasn't seen his past work and won't likely catch "It's a Disaster." "A 16-year-old Puerto Rican kid doing figure-eights on his grinder bike," Cross says, "I don't give a shit if they've seen 'Todd Margaret.'"

Thankfully for Cross, "It's a Disaster" is one of the projects that he actually cares about -- and one that stands out from the exploding comedy scene at present. "Five percent" of podcasts and online comedy, said Cross, "will be worth your while. You have to wade through a lot of crap." Cross spoke to Salon about "It's a Disaster" and a career that's artfully paired crap with more than one piece of genius comedy.

How would you handle the apocalypse?

Well, as you might imagine -- I've been asked that question a lot. And I'm not being difficult or flippant but I truly don't know. I imagine, I could be completely wrong, but it would take a lot to convince me it was actually real in this age of YouTube. When I was truly convinced it was real -- and it would take quite a bit to not think it was an elaborate prank -- if I was convinced, I would do what the fine folks on the top of Masada did and kill myself.

For a movie about dirty bombs dropped across the U.S., this is fairly apolitical -- especially considering how outspoken you were on your comedy albums during the Bush administration. Did this bother you?

I've never sought out anything because of its politics, though sometimes I'll get offered something and I'll say yea or nay due to its political message. That's a byproduct of having stand-up as a release valve or a place where I can express myself. When you look at my comedy writing outside of stand-up, there's nothing political about "Todd Margaret," no political stuff in "Freak Show." Well, there's a character called Log Cabin Republican in "Freak Show" -- but there's not a lot of it. There's not a lot of it in my writing.

As we're talking about this movie, I can only imagine you're gearing up for a bigger press push soon, as "Arrested Development" nears. How does it feel to be so strongly identified with a single show and character?

I appreciate the question. And it doesn't diminish my love and appreciation for it. I'm so thankful and lucky to have been given that opportunity, and it's an amazing show, it's an amazing character, there were great people to work with. But there are -- it goes hand in hand with some people who've never seen "Arrested Development" and think I'm the guy from "Scary Movie 2" and "Men in Black." Or "Alvin and the Chipmunks." Those people, a 16-year-old Puerto Rican kid doing figure-eights on his grinder bike, I don't give a shit if they've seen "Todd Margaret"!

But when it becomes constant, and builds up, I want to say, 'I've done other stuff! I'm glad you like it -- there are other things you might like.' But it doesn't really, truly bother me. I'm not a sad clown taking off his greasepaint, asking, Why doesn't anyone know the real me?

To what degree does "Arrested Development" and the associated fame help you make projects like "It's a Disaster" happen?

With "It's a Disaster," it helped. They were going to make it anyway, though. Once Julia [Stiles] was the first star in line, she brought on America [Ferrera], and America brought me on. In 98 percent of the world, I don't mean anything. I'm not a negative, but I'm not a positive. In 2 percent of the world -- the English-speaking world -- that is, huge comedy fanatics, for that 2 percent it means quite a bit. That's the difference in whether something gets made or not. In this kind of world, it helped that I was a part of it and able to promote it along with Julia and America. Those projects are few and far between. They're mostly weird comedy things.

But "It's a Disaster" is dark and almost dramatic at points. Do you worry about alienating the comedy-junkie audience you've built?

No. Never. That'd be ridiculous. I don't do things or not do things based on how a faceless stranger in Spokane, Wash., might react to it. I do it because I think it'll be a good project -- or be quite lucrative. I've been offered an insane amount of money for a commercial, and those things I won't do for that reason. But, with film work or TV work, for fuck's sake, I was in "Alvin and the Chipmunks"!

Did you ever find a way to merge making money and feeling fulfilled artistically?

"Arrested Development" would be that project. With "Mr. Show," we didn't make any money. We didn't see a penny from DVD sales or any of that shit. The big movies that were lucrative, "Scary Movie 2" and "Small Soldiers" and "Alvin and the Chipmunks": I didn't do them for the love of cinema. The one place it's come together was "Arrested Development." With "Arrested," it wasn't that my paycheck was so huge. That was three years of consistent work. You can make quite a living on that. And with the Netflix thing: That was lucrative. Not on the scale of a movie, but I certainly made a financial ... well, I wasn't hurting, let's put it that way. I get that money and I do something like "Todd Margaret" and over two years, I lost money. But I loved doing that project and would do it again in a heartbeat if I could do another kids' movie.

Comedians are known to be fairly neurotic, as a class of people. Do you have a read on the ongoing Leno-Fallon drama at NBC?

I don't give a shit about Leno or late night chat shows. I don't know the entire story. I certainly understand somebody being upset at a whispering smear campaign against them or the idea that your job isn't going to be there. And it seems hypocritical for Leno to be upset. But I'm not entertained or educated by reading up on comedians' neuroses.

It seems like there's a comedy boom happening online and on podcasts now, like when clubs kept opening up in the 1980s. Has this been good for comedy?

It's always good -- the more platforms that don't cost anything to get your comedy out is beneficial. Logic dictates that of the 1,600 different Twitter accounts and podcasts and Vimeo stuff that's put out there, 5 percent will be worth your while. You have to wade through a lot of crap.

It's more people who -- it kind of goes back to the indie movie scene, when it started going crazy. Films could be shot digitally, really cheaply. All these people who didn't have any access could now shoot a movie for $400,000 and get it into festivals. That's a microcosm of what we're talking about. If 100 would be made, four of them were good. There was tons of shit. Tons of garbage. People would get validated merely for making a movie. People have careers because they made a movie even though no one gave a shit. There's people who get to make movies because their YouTube movie got 80,000 clicks. Sitting on a plane and turning on Gogo Inflight Internet, clicking on something and watching it is the most fucking passive way to watch something, saying, "That was weird! Someone sent me a link! Oh, that was OK. I'll send it to Gary."

It's a really passive way to be moved.

Nobody's moved by that. It's the most passive way to watch something. That becomes frustrating and a little infuriating. You've got five scripts piled up nobody will make but this YouTube prank got 8 million hits -- or you're trying to make a TV show, whatever the fuck it is. But that's entertainment in the Western world.