Centuries before Sandberg and Friedan, there was Maria Sibylla Merian -- mother and pioneering naturalist 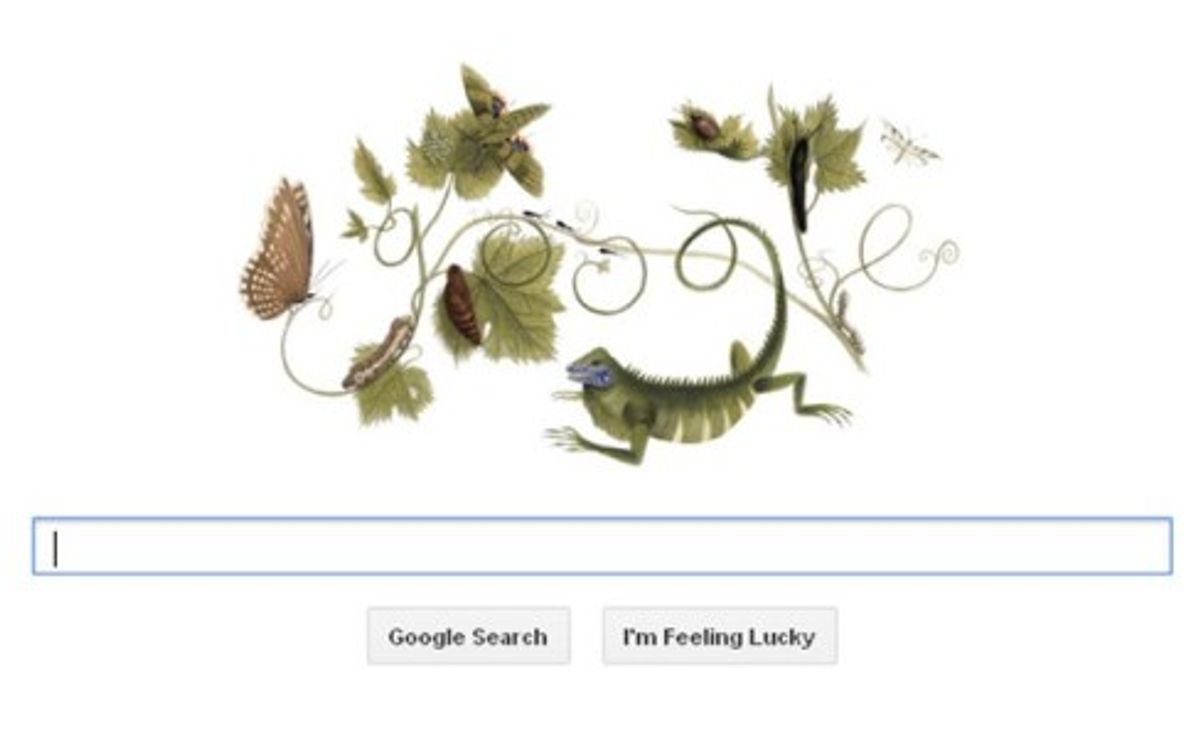 Maria wanted to study metamorphosis, if only she could find the time to investigate. Her two daughters needed her, many hours, every day. It was a thorny problem, this balancing work and motherhood, but she took the long view. When her children were young, she stayed close to home, investigated parasitoid wasps and tiger moths in the neighborhood and nearby gardens, taught painting and wrote two books about European insects. Later, when her daughters were grown and she was 52, she left her husband and sailed to South America to research the rainforest and venture, as she described it, "far out into the wilderness." Her masterwork, "The Metamorphosis of the Insects of Surinam," was published in 1705, more than 300 years ago.

Today, her 366th birthday, marked at Google by weaving her Surinam engravings in its Doodle for the day, is a chance to re-evaluate her legacy.

Many discussions of work/home life balance take as their starting point the publication of "The Feminine Mystique" 50 years ago. Feminists of the 60s and 70s are praised for opening our eyes or blamed for raising our expectations. Sheryl Sandberg's "Lean In," Anne-Marie Slaughter's essay in The Atlantic about the impossibility of having it all, Marissa Mayer at Yahoo banning the telecommute, countless blogs and television pundits, all tell us how to navigate the modern world.

But women have been participating in the economies of their communities for centuries, growing vegetables, running a brewery or a printing press, acting as midwives, selling meat in the market. Even in 17th-century Europe, when female formal education was rare and witch burnings common, women sought to have fulfilling families and do valuable work, carving a path for themselves in improbable circumstances. In this light, it might be valuable to turn down the volume on these current debates to ask how our foremothers did it. The bad news is that the problem is not yet resolved, but the good news is that their stories offer ample inspiration.

Take Rachel Ruysch. Daughter of an Amsterdam surgeon, she grew up in a house filled with strange animals and plants gathered from across the globe. As a young woman, she helped her father preserve anatomical specimens for his collection, but then her interest turned to art. She studied with Willem van Aelest, learned to paint in still lifes in oils, and joined the guild in The Hague. Her long career included a stint as a court painter, producing dense explosions of tulips, roses, poppies and pomegranates, occasionally enlivened by a lizard from her father's stash. She had ten children.

Or Jeanne Baret, a botanist who circumnavigated the world dressed as a man in the 1760s, gathering, among other plants, bougainvillea. Or Margaret Hardenbroeck, an entrepreneur who came to the New World in her 20s as an agent for her cousin. She started selling European necessities to the colonists --pins and cooking oil -- and bought furs, which she shipped back to Holland. Eventually, she sailed on her own two ships across the Atlantic, overseeing her business interests. When she died, she had five children and was the richest woman in New York.

As for Maria Sibylla Merian, the book that resulted from her Surinam trip inspired generations of naturalists from Carl Linnaeus to Alfred Russell Wallace and Vladimir Nabokov. And rather than being stunted by her ambition, her daughters benefited from her skills and drive. One moved to St. Petersburg, the first woman hired on the staff of Peter the Great’s natural history museum.

Certainly, none of these women offer answers to immediate questions about how much unpaid pregnancy leave to take or whether to breastfeed or use formula. Some of their solutions might seem impractical or alien. Baret gave her child up for adoption. The facts of their lives are their only parenting tips.

But I know that when I was in my third trimester with twins, up late with pregnancy insomnia, I craved these biographies more than another statistic about how giving birth to a child costs women up to a million dollars in lost wages, or a study from the Pew Research Center indicating that only 31 percent of mothers who work full time find themselves "very happy." We read stories to show us how to navigate the unknown, and histories, like newspaper articles, are just another kind of story a culture tells about itself. They feature flawed subjects, like us. They demonstrate not what is statistically probable, but what is possible. And sometimes, late at night, on the brink of great change, that is what we need.