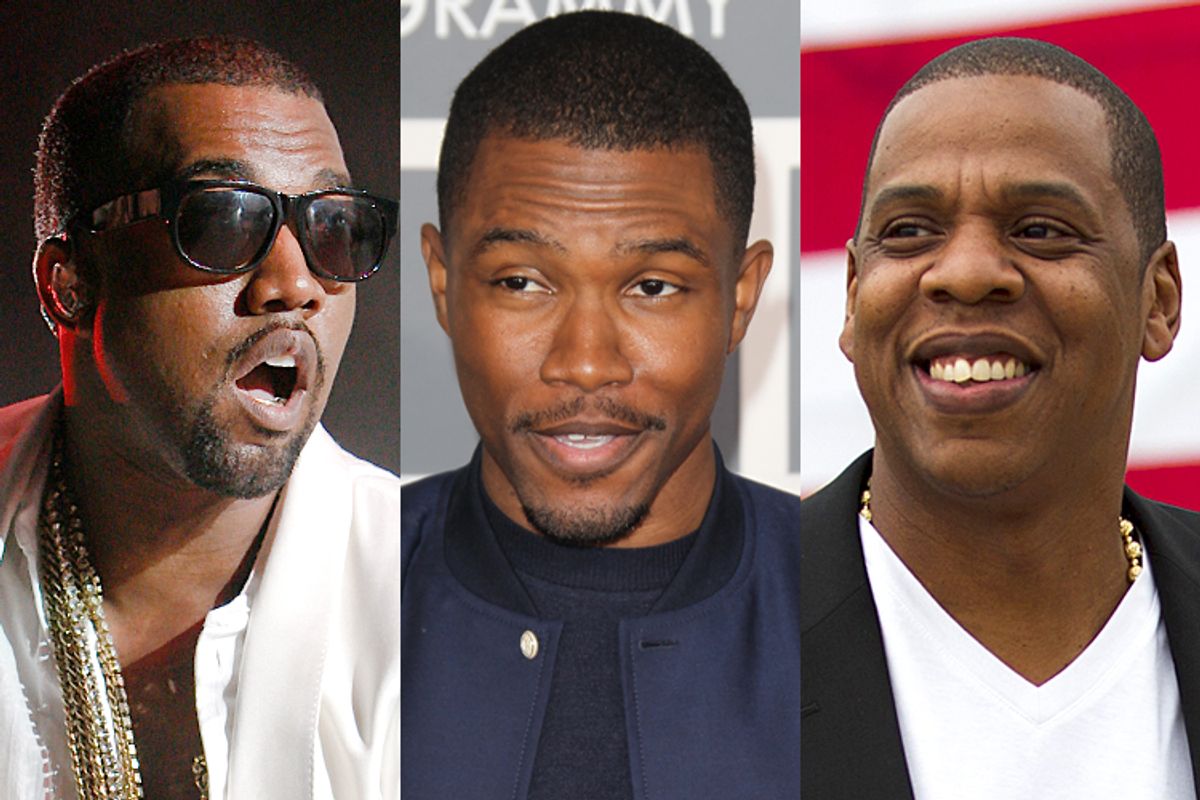 That attitude permeated rap for most of its existence -- until now, it would seem. This past week, rap titans Russell Simmons, Jay-Z and Kanye West have expressed support for marriage equality. And they aren’t alone. Fat Joe, A$AP Rocky and The Game, among others, have been clear that they don’t discriminate based on sexuality. This past year’s breakout hip-hop/R&B artist Frank Ocean famously announced his fluid sexuality via a Tumblr message and received the support of many artists, including his former rap-troupe partner Tyler the Creator, who is paradoxically known for using homophobic slurs in his music.

“A decade ago, you would not have seen this,” said Dr. Susan Weinstein, a professor of hip-hop studies at Louisiana State University hip-hop studies professor and author of "Feel These Words: Writing in the Lives of Urban Youth."

What’s changed? It’s arguable that mainstream culture in general evolved and rap simply followed suit. Weinstein does think there’s “a larger change in culture, and hip-hop is reflecting that change.” Especially when it comes to younger rappers like A$AP Rocky, who is in his early 20s. “This generation has never not seen gayness being public,” Weinstein said.

Dr. Tommy Curry, a professor of Africana philosophy at Texas A&M agreed, adding, “I think this is a natural evolution and expression,” Curry said. “Not just in the black community but in society at large.”

But for older artists like Jay-Z, the landscape is a little different. Take this lyric off “22 Two’s” from Jay-Z’s 1996 début "Reasonable Doubt": “Too many faggots clocking my spending.” And you don’t have to look much further to find him using the slur elsewhere on his early records, which is a far-cry from the values he’s espousing today.

Frankly, that’s a fairly tame lyric compared to some of early rap’s homophobia. Ice Cube’s “No Vaseline” is as homophobic as one might imagine, and in “Pimpin’ Ain’t Easy” Big Daddy Kane blatantly claimed to be “anti-faggot” (then, in the next line, felt the need to explain “That means no homosexuality”). Even socially conscious rapper Nas filled his anti-Jay-Z song “Ether” with accusations of homosexuality. While much of rap was reclaiming a racial slur, it was proliferating a homophobic one.

The change in rap may be driven by changes in politics and status — someone with the prowess of Jay-Z, for example, who runs in high-powered social circles, has nothing to gain but everything to lose from homophobia. But while some rappers now seem as timid as Democratic senators finally expressing support for gay marriage now that public opinion has swung in that direction, the rappers who were pioneers in their efforts against homophobia had to show real courage.

Kanye West, who has never had trouble expressing his views, became one of the first mainstream rap artists to call his genre to task for its anti-gay views. In a 2000 < href="http://www.mtv.com/bands/w/west_kanye/news_feature_081805/index3.jhtml">interview with MTV, he came out against homophobia in rap. “But everybody in hip-hop discriminates against gay people … And I wanna just come on TV and just tell my rappers, just tell my friends, ‘Yo, stop it fam.’”

The eight years since have seen a very slow trickle of artists voice their support — or, as is often the case, their bare-minimum acceptance — of homosexual culture.

Outside of some fringe subcultures within the hip-hop community, such as the extremely gay-friendly New Orleans bounce rap scene, this is perhaps the first time in hip-hop history that artists who are supportive of homosexual rights are not being attacked by their peers in response for that support.

The reasons why vary — for one, many of these rappers have gotten older and maturity often accompanies age — though the most cynical might point out that a multi-billion dollar industry simply couldn’t continue to survive with the stigma of being homophobic. In that same vein, though, the very same money that powers the industries has offered many of its formerly poverty-stricken artists (such as Jay-Z) experiences that probably didn’t previously exist.  “When everyone’s kind of poor, people tend to turn on each other,” Weinstein said. “[They think,] ’Everyone hates us so we’re going to hate you, so it at least makes us feel like someone is worse than us.’ [It’s] the struggle of not being in last place.”

In a column the critically acclaimed rapper Brother Ali wrote for the Huffington Post, he suggested money and success helped change his viewpoint and finally made him feel embarrassed for older songs in which he used the word “faggot.” He wrote:

My use of the f-word more than a decade ago in the song ‘Dorian’ off Shadows On The Sun continued to echo in a space in which I no longer dwelled … My world was pretty small and bleak when I wrote that album. Since then I've been fortunate enough to tour the world, read James Baldwin and develop deep friendships with musicians whom I love and respect and who are openly gay.

In short, the world gave me another chance. But those words are there forever.

And he’s right. No matter what Jay-Z says today, his albums will always be accessible. He and other rappers may want to end homophobia, but it’s still a bumpy road. There’s a fine line but a pretty deep valley between being merely accepting and not being hateful, and most rappers seem to exist in that valley. Rapper 50 Cent, a man who once proclaimed any man who didn’t enjoy having sex with women should kill himself, told Vibe in 2012, “I think everyone should be happy. I think a fool is going to go against same sex marriage at this point” and in the same breath said, ”We need organizations for straight men. We do. We need organizations for straight men in the case you’ve been on the elevator and somebody decides they want to grab your little buns.”

Kanye West, who offered a heartfelt plea to the rap community to end its rampant homophobia, made sure to include the phrase “no homo” in his guest verse on Jay-Z’s 2009 single “Run This Town.”

Tyler the Creator publicly and enthusiastically voiced his support for his friend and co-collaborator Frank Ocean, but the used the word “faggot” 213 times in his solo album "Goblin," according to the NME.

Then there’s Eminem, a man who may have received more ink than anyone when it comes to this particular subject. In the 2000 song “Criminal,” he offered a long, homophobic slur-filled diatribe to kick off the song, which includes the phrase “Hate fags? The answer’s yes.” Later in the same song, he stated, “Relax guy, I like gay men.” Eminem is also close friends with Elton John and was quoted in the New York Times stating that gay marriage should be legal because “everyone should have the chance to be equally miserable.” He’s the best-selling rapper of all time, and his viewpoints on sexual orientation, like his viewpoints on everything, seem all over the map.

Though doing so in his own childish way, Eminem wasn’t simply spitting vitriol toward homosexuals (as so many angry op-eds assumed). He was starting a conversation. Eminem has always been a walking paradox, using several different personas – Eminem, Slim Shady, Marshall Mathers, B Rabbit – to say everything from the hateful to the unpopular to the nearly absurdly sentimental. It allowed him to do the very thing, within one discography, that rap has always done as a whole, according to Curry. It allowed him to argue with himself. “[Rap’s] always been a place for debate,” Curry said.

On one hand, the statement and people’s reaction thereof “exposes that people are so ready to impact something on face value rather than looking at how someone might be using it,” Curry said, and this seems to be, in some ways, Eminem’s goal. On the other hand, it launched a debate that still rages 13 years later in the hip-hop community.

“Back in the day, when Eminem first started using the word ‘faggot’ in his videos, there was a huge debate on MTV and BET about that,” Curry said. That debate centered on whether or not his views (and usage of that slur) represented the hip-hop community at-large, especially since Eminem was white.

Over time, that debate has snowballed into a very different hip-hop culture than what once existed, into a culture whose leaders publicly support marriage equality, a culture that seemed improbable if not impossible just 10 years ago.

Travis M. Andrews is a Washington, D.C.-based writer who has written for The Atlantic, Mashable, The Washingtonian and reported for several newspapers throughout his native Louisiana. He's also a contributing editor for NBC's DVICE and a frequent contributor for The Washington Post Express. For more about Travis M. Andrews, go to www.travismandrews.com.