There are no lone inventors

Nikola Tesla's work on AC technology changed the world, but to pretend he was its sole developer is ludicrous 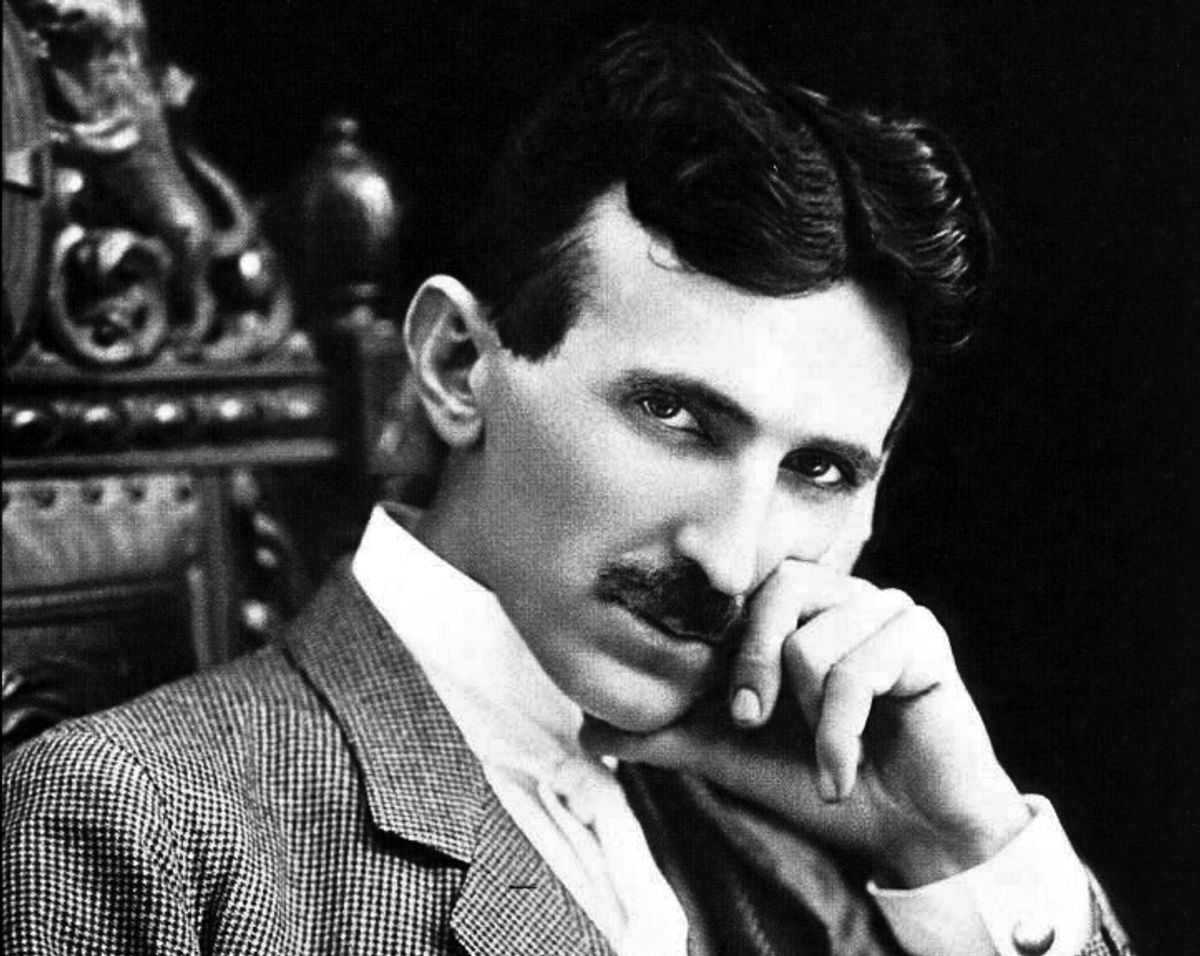 This post is based on a talk I gave at South by Southwest and a version of it first appeared at BBC Future.

Who invented the Internet?

To answer that seemingly simple question you basically have two options: you can go on for hours explaining the hundreds of people and institutions that contributed crucial advancements to the way that the Internet operates, or you can just say Vint Cerf. Or Leonard Kleinrock. Or Tim Berners-Lee.

People have been fighting for decades over who invented the net. Some will tell you that Vint Cerf’s work on its underlying protocols—TCP/IP—was its true beginning. Others will go back further in history and tell you that Leonard Kleinrock’s work on queuing theory was the real birth. Some may scoff at the idea of conflating the web and the Internet by suggesting Tim Berners-Lee, but in multiple-choice tests of the future the “right” answer will be determined by the next hundred years of how historians choose to tell that story.

The truth is that history, like innovation, is messy. What starts as an idea for a product, or a service, or an institution is dependent upon thousands of forces seen and unseen, recognized and unrecognized, historical and contemporary. In reality, the Internet was invented by thousands of people. To buy into the other version of history means you buy into the “myth of the lone inventor”—an idea that creates simple, even entertaining narratives, but which does a great disservice to the thousands of people who have invented our modern world.

Nowhere is the perpetuation of this myth greater than in the work of the late Serbian-American inventor Nikola Tesla—the man, we are often told, who invented everything from radar to radio and domestic electricity supplies. The fanaticism surrounding Nikola Tesla has reached fever pitch in recent months, driven by new films, endless blog posts and a high-profile effort to fund a museum dedicated to the legendary inventor. But the byproduct of this effort to reposition Tesla in the scientific canon has been the creation of many more myths about the man—myths that actually harm our understanding of history and the history of innovation.

T-shirt for sale at TheOatmeal.com

Take a web comic called “Why Nikola Tesla Was The Greatest Geek Who Ever Lived,” published last year by a website called The Oatmeal and instantly shared by thousands across the web. The strip, created by Matthew Inman, is an entertaining look at Tesla’s life and shows many of the ways in which he was perhaps smarter, more altruistic and generally a better human being than his contemporaries.

But a couple of sentences into the comic, the myth begins: “In a time when the majority of the world was still lit by candle power, an electrical system known as alternating current was invented and to this day is what powers every home on the planet. Who do we have to thank for this invention that ushered humanity into a second industrial revolution? Nikola Tesla.”

The problem with this version of history is that Tesla wasn’t the only person working on AC technology. Concurrent with Tesla’s major breakthroughs in AC in the mid-1880s, an Italian inventor named Galileo Ferraris developed a similar system—something we can likely chalk up to simultaneous invention.

Charles Bradley was another inventor working on AC and was granted patents for his work on both two-phase and three-phase systems. Friedrich Haselwander worked on AC in Germany and is sometimes credited as the first to use a three-phase system in 1887. William Stanley and Elihu Thomson would also contribute immensely to the work of alternating current technologies during this time. The list goes on and on.

Tesla’s development of AC is undoubtedly important for the evolution of our modern electrical world. But to pretend that he alone invented this system strikes me as absurd.

It is the same story with radar. To buy into the idea that Tesla was the inventor of radar is to discount the contribution of German physicist Heinrich Hertz, wireless pioneer Guglielmo Marconi, and German inventor Christian Hulsmeyer, who all did work in the area before Tesla. It also disregards Robert Watson Watt and the many others who refined the system after Tesla’s work.

Tesla fanatics may interpret my argument as saying that he does not deserve recognition for his vital work—and nothing could be further from the truth. Tesla made countless important contributions to the world, but he was not the sole “inventor” of these technologies. Many people did work in these areas before Tesla, just as many people contributed to them long after he died.

You may think that arguing over how much credit a 19th-century inventor deserves for his work is esoteric and of no relevance to the modern world. But the question of who is the sole inventor of something is an important question. So important that it can net you millions of dollars.

Last April, a judge in California ordered electronics giant Samsung to pay $1 billion to iPad maker Apple. The California firm had sued Samsung on the grounds that it had copied the look and overall feel of the iPhone and iPad. Since the original judgment, that $1 billion figure has been cut in half, but the central question remains: who invented the iPad?

Here, the court proceedings offered up some fascinating examples. Samsung, for example, cited a scene in Stanley Kubrick’s classic 1969 film2001: A Space Odyssey, which shows two men watching BBC 12 on devices that could very well be interpreted as iPads. Samsung cited this scene in court as prior art that would invalidate Apple’s patents on what amounts to patenting an interactive, rectangular media-viewing device.

Back in 2011, the judge in the case also made reference to a 1994 video produced by Knight Ridder, which also showed an iPad-like device that he thought might invalidate the Apple patent.

Regardless of the outcome—which was wrapped up in the vagaries of patent law—the case highlights the essence of innovation. It rarely happens in isolation, instead drawing on an extremely complex mix of authors and ideas, with everyone taking from everyone else.

Yet, still we like to keep our narratives simple. In part, this is because of the commercialization of history. Messy stories with multiple protagonists are no good for selling T-shirts, telling a five-minute story squeezed in between TV ads, or creating an engaging blog post or comic.

However, I believe we also cling to the idea of the lone inventor because it feeds into the idea that any of us can do the same. We like to imagine that an inventor exists outside of the cultural and institutional forces that facilitate innovation. If people would simply try harder—pull themselves up by their own bootstraps and get better ideas—they could change the world.

But this is a poor understanding of history that does the future no favors. To allow people to truly understand how messy the history of innovation and invention really are we need to kill the myth of the lone inventor and celebrate the rich diversity of people who bring an invention into being.

And, it seems others agree. On March 18th, five engineers that helped to create the Internet were awarded the first ever Queen Elizabeth Prize for Engineering. The £1 million prize was shared between Sir Tim Berners-Lee, Bob Kahn and Vint Cerf, who developed the protocols that underpin the Internet; Louis Pouzin, whose research influenced Kahn and Cerf’s work; and Marc Andreessen, the co-creator of the world’s first web browser.

This kind of recognition is an important step towards answering the question of who invented the Internet. It’s also a step towards quashing the myth of the lone inventor, and celebrating the rich tapestry of characters behind most inventions and the slow gradual process that brings them into being.

It is an idea that I believe Tesla would have approved of.

“The scientific man does not aim at an immediate result,” he wrote in 1900. “He does not expect that his advanced ideas will be readily taken up. His work is like that of the planter—for the future. His duty is to lay the foundation for those who are to come, and point the way.”