Five questions that will decide the gun debate

The fight for gun safety reform has complications and hurdles. Here's what will determine who ultimately wins 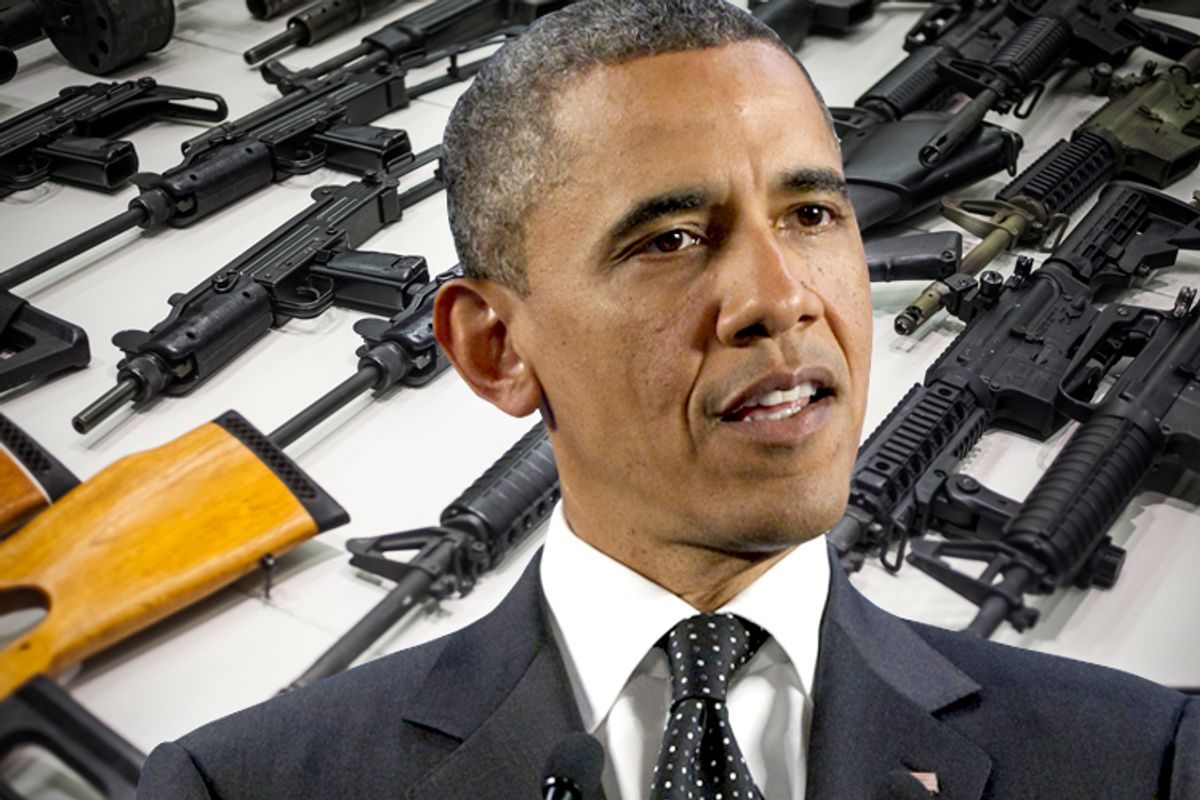 President Obama's visit to Colorado today to press his case for modest gun control comes as the fight over firearm policy becomes more complicated -- and in some cases, more oxymoronic -- than ever. In advance of his visit, the National Rifle Association released a rehash of its earlier ridiculed proposal to supposedly solve the scourge of gun violence by arming teachers. However, as expected, the proposal did not endorse universal background checks for gun purchases.

In a CNN interview discussing the plan, NRA official Asa Hutchinson claimed he is "open to expanding background checks," but the Huffington Post notes "he stopped far short of endorsing the type of universal background checks for all gun sales that have been proposed" in major legislation before the U.S. Senate.

All of this points to five key questions at the heart of today's increasingly bizarre gun debate - and their not-so-satisfying answers:

1. Why does the NRA oppose the universal background check policy it once championed?

Among Colorado's package of landmark gun regulations that President Obama will likely tout is a law mandating universal background checks. With a substantial portion of gun sales not subjected to background check laws, it's a modest idea -- so modest, in fact, that the National Rifle Association vociferously championed the concept after Colorado's first gun massacre in Columbine (the NRA also supported the creation of gun-free school zones).

Now, though, following another massacre in Colorado and with nine in 10 Americans telling pollsters they support universal background checks, the NRA says such checks are a stealth government plot "to confiscate your guns."

A new ad campaign reminds Americans that none other than Ronald Reagan strongly supported background checks for gun purchases. He also passed some of the toughest gun laws in the country as California governor, saying he saw “no reason why on the street today a citizen should be carrying loaded weapons.”

In light of this, why do so many Republican senators who so often pledge fealty to Reagan nonetheless oppose background checks? Part of the opposition comes from those in the Rand Paul camp who are ideological libertarians. But that cannot explain opposition from the GOP establishment, which is anything but libertarian. No, that opposition almost certainly is a tail wagging the dog phenomenon whereby Republican politicians are simply doing what the NRA says.

3. How can Republican politicians oppose universal background checks knowing their own voters support them?

Even if the NRA is telling Republican lawmakers to oppose background checks, there's still the whole issue of voters -- aka the people whom Republicans politicians rely on to get reelected. If polls show the vast majority of Americans -- and self-identified Republicans -- support universal background checks, then isn't a politician committing electoral suicide by opposing that gun policy?

In a system of fair and competitive elections, yes. But that's not what America has, thanks to gerrymandering.

In 2012, Democratic candidates won in total 1.4 million more votes for U.S. House than Republican candidates. And yet, the Washington Post reports that Republicans ended up with their "second-biggest House majority in 60 years and their third-biggest since the Great Depression." The GOP engineered this by using its state legislative power to draw the lines of congressional districts in ways that create as many staunch Republican and Republican-leaning seats as possible.

In districts whose lines are drawn to all but guarantee a Republican general election winner, the real election contest is in the Republican primary. That means many -- if not most -- Republican House members are more worried about preventing a primary candidate from outflanking them on their right than they are about embracing more moderate positions in anticipation of a tough general election against a Democrat.

The consequences of such a dynamic is exemplified by the politics of guns. Background checks may be supported by most voters and even most Republican voters, but primary elections are typically low turnout and therefore don't involve most voters. That means groups like the NRA in particular and the hardest-of-hardcore conservative voters in general have a disproportionate power to sway primary election outcomes. Consequently, Republican House members are often intensely focused on preventing gun-rights primary candidates. To do that, the House members often just default to the most extreme gun position possible -- in this case, a position against background checks -- to deny such primary candidates a contrasting issue on which to campaign.

4. What about Republican senators? They represent states that aren't gerrymandered - so how are they able to get away with opposing sensible gun regulations supported by most Americans?

It's true, states aren't gerrymandered every 10 years, but as Bill Bishop's seminal book "The Big Sort" shows, there is a kind of self-gerrymandering that's happening at a macro level. In general, as the politically like-minded geographically sort themselves into warring camps, blue states are getting bluer and red states are getting redder, thus replicating the same political dynamic on major issues in Congress' upper chamber that dominates its lower chamber.

That means on an issue like guns, senators from ultra-red states are often more focused on taking extreme gun positions that prevent an NRA-backed primary than on finding a moderate position for a contested general election. And here's the thing: Because of the filibuster, it doesn't take many such red state senators to stop gun control legislation. Indeed, the filibuster gives 11 percent of the population enough Senate representation to stop anything -- even something like background checks supported by the other 89 percent.

5. But if gun regulations like universal background checks can pass in Colorado, can't they pass anywhere?

That's the argument President Obama will no doubt be making in Colorado today, and there's definitely some credence to it. As one top Republican legislator in Colorado told the Wall Street Journal: “This is ground zero on this issue ... we’ll see gun-control groups spreading to other parts of the country, saying, ‘We did it in Colorado, we can do it here.’”

That's probably true at the state level because the twin filibusters that create congressional gridlock -- the one in the House that prevents votes on bills the GOP doesn't like, the other in the Senate that prevents votes on bills any single senator doesn't like -- don't dominate state legislatures. Most of them simply don't have filibusters, and unlike in Congress, the legislative rules make it easier to at least force votes on major issues.

The flip side is the big problem for Obama and the majority of Americans who support modest federal gun controls. Simply put, because Congress is structurally designed to create gridlock, what happens at the state level doesn't necessarily translate into congressional action. So while even a state in the traditionally pro-gun Intermountain West can pass gun regulations, Washington may have more trouble doing the same.