I swallow my fear

As a sideshow performer, I put swords down my throat. But offstage, ordinary activities can give me panic attacks

By The Lady Aye 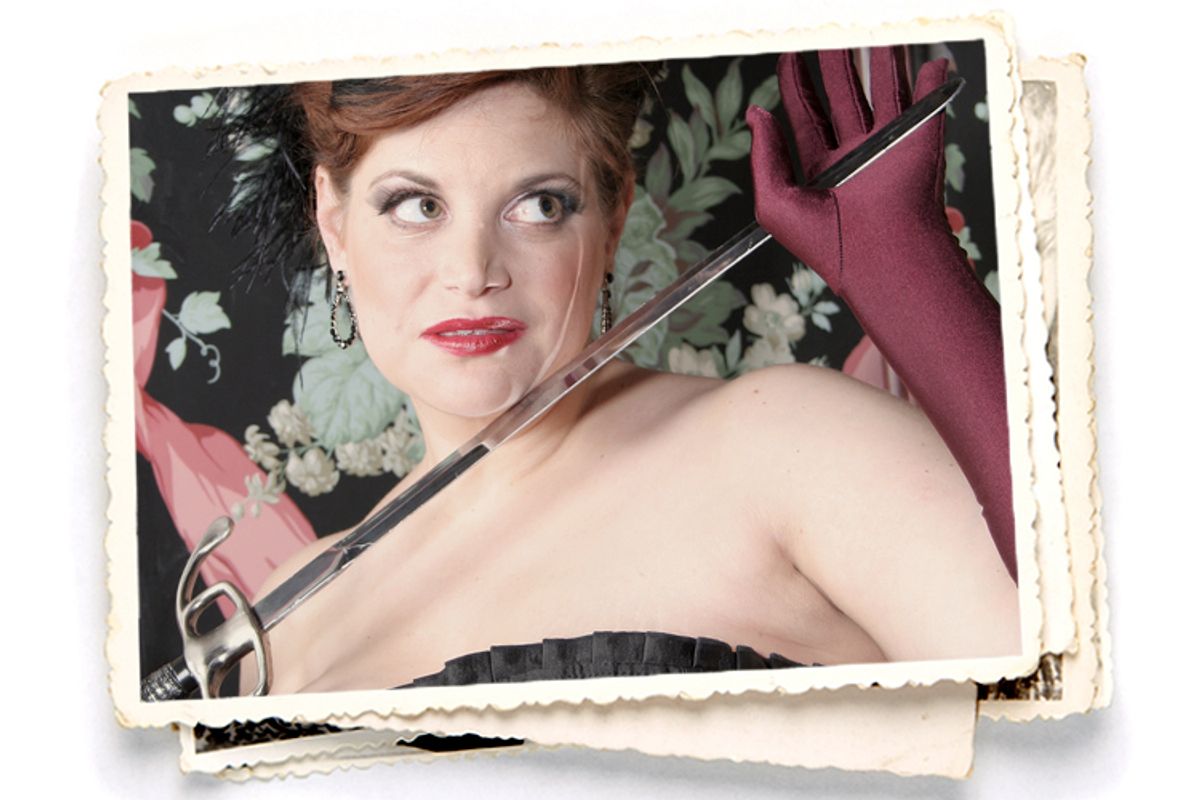 Photo of the author (Sequoia Emmanuelle)
--

Like scores of other Americans, I suffer from panic attacks, or as my insurance forms call it, Generalized Anxiety Disorder. I call it “the Panics,” since that gives it a zippy, old-fashioned flavor. I can’t pinpoint an exact cause, but it could be related to the fact that I’m Jewish, so I have a genetic propensity for ajeda, or that I’m a World Trade Center survivor, or that I grew up with a mentally ill and physically abusive brother. All of which add up to a perfect storm of anxieties, if I do modestly say so myself.

What may be unusual about my anxiety is that I don’t fear people. I thrive on their company, and I’m more at home outside of my apartment, which is probably one of the reasons I love my job so much. I largely make my living as a professional sideshow performer, wherein I eat fire, swallow swords and escape from straitjackets for paying audiences. Oddly, I find the life-threatening aspect of my performance calming and joyous. Somehow, being a daredevil on occasion helps me feel more normal.

It’s a strange dichotomy, but life is nothing if not full of fate’s little ironies. I’m afraid of the sound my refrigerator makes. I’m afraid of what’s in my mailbox. Don’t even ask about calls from numbers I don’t have in my caller ID. But I am not worried about breathing fire, talking to rooms full of drunks and letting complete strangers stand on my chest while I lie down on a bed of nails – all of that is cool with me, and when it goes well I feel happy and at peace with myself. Bizarrely, it’s everyday activities that can send me into a primal state of horror.

Actually, I didn’t believe in panic attacks, until I started having them. They seemed like a trendy disease everyone gets after the New York Times covers it, like gluten intolerance or chronic fatigue. Then came 9/11, and a morning when I woke up convinced I was having a heart attack and that the world was ending. My diagnosis was slightly off.

I eventually called my therapist, and discovered that my heart was working fine. My head, however, had found a new rabbit hole to run down. The Panics defy logic and common sense. They are wordless, shapeless vapors that stop time and thought in a mind-deafening buzz of fear; they are ruthless in their attack and unpredictable in their arrival. Doctors give you pills and breathing exercises to combat them where they live. These things help, but the fear is a specter that continues to lurk in my mind’s attic (maybe under the stairs, I can’t say).

But I’m also grateful for the Panics. Because it was in the first few years of freaking out about everyday things that I learned I had unusual powers; namely, that I can eat fire, swallow swords and escape from a straitjacket.

Discovering these talents was almost as much of a surprise as the Panics, because ever since high school I’d been the person behind the camera and out of the spotlight. I’d never entertained the idea of performing, although I had been in love with all things freakish since childhood. I had an opportunity to train with a retired fire eater, though, and I fell in love with it. Becoming a sideshow performer meant becoming the rock ‘n’ roll movie star I secretly wanted to be but didn’t meet the job requirements for -- too fat, can’t sing, don’t like drugs. Instead, I stepped into the Lady Aye like she was a Halloween costume and assumed she has realized all of my ambitions; she was glamorous, confident and daring, and I wore this new suit until she fit like a second skin. It was more than just makeup and costumes, it was transformative; it was as drag queens say, “realness.” Like so many awkward people before me, I found the power of creating a stage persona. I was no longer simply Ilise; I was the Lady Aye.

As I got better, the stage became my happy place. That rush of happiness from working an audience into fear and frenzy; making them laugh and winning them over. When it goes well, it’s everything, and even when it goes badly – well, I still just plunged a 19-inch sword down my throat or ate fire for money. I am addicted to the surge of satisfaction that brings, not the physical response of the acts themselves. When I’m in the zone as the Lady Aye, I’m nearly fearless. It gives me the illusion that I am in control of a universe that, on some days, terrifies me with its randomness.

There is a flip side to this bulletproof identity that does make me uncomfortable. People often tell me I’m brave, that I’m so badass. And while my ego loves the petting, the dark creature that haunts my brain whispers in my ear, “If they only knew the human torch over here needs a Xanax to answer the doorbell ...” Of course, I never say my fears out loud to complete strangers, but there are times when I’m smiling and hugging and snapping pictures with audience members and I feel like a complete fraud.

And then there are moments where my two streams of consciousness cross – the Lady Aye starts to shake and fret before taking the stage, and Ilise musters the courage to face her imaginary demons – so, they feed each other. This place is where my hardest work is done; forcing myself out from under the covers and out into the world or leaving the stage behind, so I can just go about my everyday housekeeping. This is where I call on my flameproof, “I got this,” larger-than-life alter ego just so I can get things done. In the end, I do it when I want to be fearless and whole. When I want to be the badass I pretend to be -- and bit by bit I’m becoming.

By The Lady Aye

The Lady Aye is an award-winning sideshow performer (rare double blockhead, fire eater, escapist, pain-proof girl, sword swallower, and grinder girl) and MC, who has worked with everyone from Rob Zombie to Cirque du Soleil. She is currently working on her memoir, "Pain-Proof: Becoming the Lady Aye."

MORE FROM The Lady Aye