Two Republican senators and Fox News think so, but spoiler alert: Not really 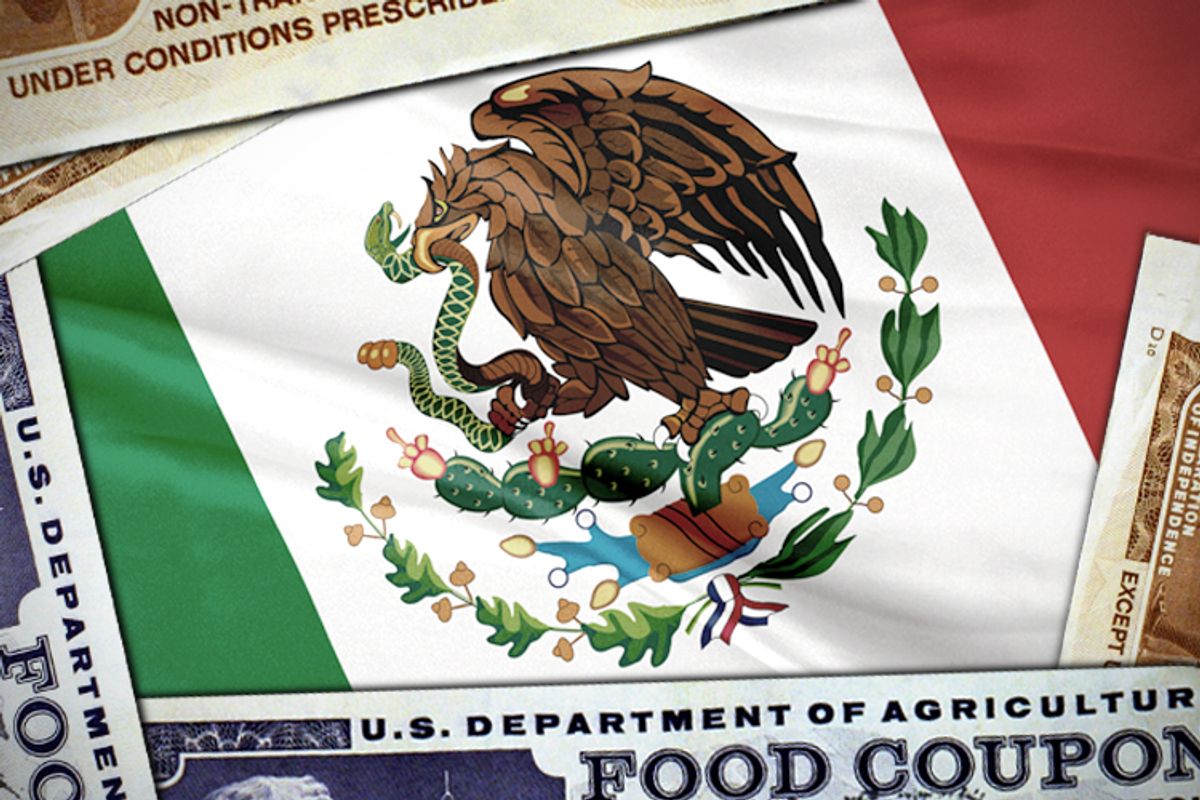 If you were to design the Platonic Ideal of a right-wing meme in the Obama era, it might go something like this: “The Obama administration has entered into an agreement with the government of Mexico to give food stamps to Mexican immigrants ... the second you arrive here from Mexico.”

Food stamps! For immigrants -- possibly illegal ones! -- from Mexico! It’s a veritable orchestra of dog whistles. That was Daily Caller founder Tucker Carlson speaking with Laura Ingraham Tuesday, but he’s hardly alone. Oklahoma Republican Sen. Jim Inhofe told NewsMax this week of undocumented immigrants, “As long as we supply their demand here in this country, they’re going to figure out a way to get through. And I’m talking about with the food stamps.”

“In Mexico, there is no welfare. No food stamps. Now, a lot of them -- Mexicans -- want to come here,” Fox News host Bill O’Reilly said Monday. (Mexico actually has an expansive welfare state, including universal healthcare rights, social security and food assistance programs, though actual access is substantially lower than what’s technically on the books.)

Brian Kilmeade brought the outrage early one morning last month to Fox and Friends, noting that “while the sequester has hit and furloughs are going to happen, the USDA is promoting food stamps in Mexico.” Co-host Steve Doocy chimed in: “What a good reason to come to the United States -- they get food stamps."

So is the Obama administration luring immigrants to the U.S. with the promise of a cushy $33.35 a week in food assistance? The short answer is no. The long answer is that the program was actually started by Bush and that one has to be in the country legally for five years before even qualifying for food stamps.

But first back to the myth. No one has done more to advance it than Sen. Jeff Sessions, a leading immigration hard-liner in the Senate, who began hectoring the USDA last summer for more information on the program.

"It has become increasingly clear that the mission of the food stamp program has moved from targeted welfare assistance for those in need into an aggressive drive to expand enrollment regardless of need," Sessions wrote to Agriculture Secretary Tom Vilsack in July of last year, suggesting the administration was “pressuring” Mexican immigrants to join the rolls.

Naturally, conservative media took the ball and ran with it. The Drudge Report devoted its big banner to the headline: “US Partners with Mexico to Boost Food Stamps Rolls.” Fox News and conservative blogs covered the scandal extensively for several months as Sessions and Vilsack exchanged more letters, but the issue eventually died out late last year.

That is, until immigration came back on the agenda this year. In mid-March, Sessions tried to defund “this controversial promotion campaign,” but Democrats blocked the move on Sessions' Budget Committee. Now, conservatives can attack not only the program, but Democrats for defending it.

So what’s actually going on here?

Here’s what Tucker Carlson et al. get right: The USDA provides information about enrolling in the program at Mexican consulates. Here’s what they get wrong: everything else.

First of all, the program was actually started by George W. Bush in 2004, not Obama. Here’s then-Agriculture Secretary Ann Veneman announcing the new program in July of 2004:

Many Mexican Americans and Mexican nationals working within the United States have limited awareness of eligibility for Food Stamps and other nutrition programs such as Women, Infants and Children program and school meals. Additional barriers such as the language heightens the need for specialized outreach. The objectives under this agreement include new partnerships, communications outreach in both English and Spanish, and other activities to educate eligible populations.

Secondly, the program doesn't actually provide food stamps to immigrants -- that too was a product of a Bush-era Farm Bill -- but merely information. And it does this not in Mexico, as some claim, but at the country's 45 consulates across the U.S., which Veneman called "an ideal network to help with outreach for USDA nutrition programs."

What this entails is educating consulate staff about the program (hence binational meetings on the program) and making sure brochure racks are adequately supplied with literature on the program, a USDA official, who asked not to be named because of the political delicacy of the issue, told Salon. The USDA does exactly the same thing with local charities, faith organizations and other places they might reach vulnerable populations, the official said.

Third, you can't even qualify for food stamps as a non-citizen until you've been in the country legally for five years. "Undocumented workers are in no way eligible," Melissa Boteach, who studies poverty at the Center for American Progress, told Salon.

Indeed, official USDA guidance notes, "SNAP eligibility has never been extended to undocumented non-citizens." An immigrant hoping to take advantage of American food stamps would have to get a green card, move here, wait five years, and then cash in. It's not exactly a get-rich-quick scheme.

There are some exceptions for children and the infirm, but fewer than 4 percent of food stamp users are non-citizen legal immigrants.

Why would the U.S. want to educate Mexican-Americans about nutrition assistance? Because Latinos have disproportionately high hunger rates.

Of course, attacks on food stamps are nothing new -- Rep. Paul Ryan's budget slashed the food assistance program, for instance. Ironically, Boteach noted, “the entire 10 year cost of the Ryan budget cuts to SNAP could be avoided by closing the tax loophole that covers corporate meals and entertainment.”