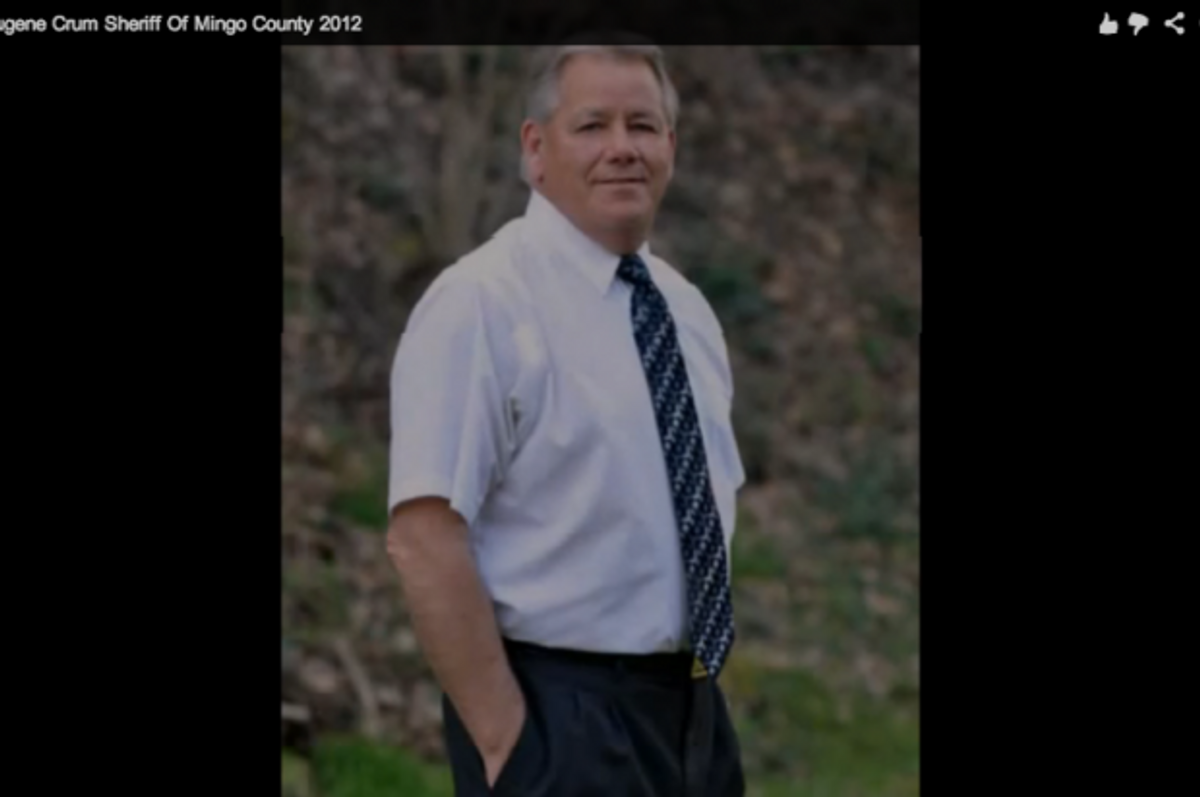 WILLIAMSON, W.Va. (AP) — Just months before being gunned down, Sheriff Eugene Crum made good on a campaign promise to do what many in law enforcement have attempted for years in southern West Virginia — crack down on drugs, especially the illegal sale of prescription pills.

In three months and two days on the job, he'd already helped indict dozens of suspected drug dealers through Mingo County's new Operation Zero Tolerance. Authorities haven't said whether that work was related to his shooting death at midday on a street in the small town of Williamson on Wednesday, but residents and county officials suspect it.

Resident Jerry Cline stood near the site of the slaying hours later, the drug crackdown clearly at the forefront of his thoughts.

"He told them right before he got in as sheriff, 'If you're dealing drugs, I'm coming after you. I'm cleaning this town up,'" Cline said. "He got out just to do one thing, and that's to clean this town up. That's all that man tried to do."

Authorities were mum about a possible connection between Crum and the suspect, 37-year-old Tennis Melvin Maynard, who was shot and wounded by a Mingo deputy following a chase and after state police said he pulled a weapon.

At a news conference hours after the killing, officials mourned the fallen sheriff, but released few details of the shooting, which happened just blocks away from the county courthouse.

"We were and we are proud of him and his service," State Police Capt. David Nelson Hubbard said. "To say Eugene will be missed is a vast understatement."

A bouquet of red roses with a red ribbon was fastened to a guardrail above the parking lot where the shooting happened.

Though there is no indication of any connection, Crum's killing comes on the heels of a Texas district attorney and his wife being shot to death in their home over the weekend, and just weeks after Colorado's corrections director also was gunned down at his home. Those bold killings and others have led authorities to propose more protection for law enforcers.

Crum was killed in the same place where he parked his car most days to eat lunch, near the site of a former pharmacy known for illegally distributing pills, a "pill mill" the sheriff wanted to be sure remained shut, said Delegate Harry Keith White, who campaigned with Crum last year.

"I think anybody you ask would tell you he was a great guy, always with a positive attitude, always trying to help people," White said. "It's just a sad, sad day for Mingo County and the state of West Virginia."

State, federal and local authorities have all tried to clamp down on West Virginia's drug problem, which centers on the illegal sale of prescription drugs in the southern counties. Mingo County is in the southwest corner of West Virginia, on the Kentucky border.

In February, federal officials said they had prosecuted more than 200 pill dealers in the past two years in West Virginia.

U.S. Rep. Nick Rahall, the Democrat whose district includes Mingo County, said the sheriff, who was married with two children, was new to his job but not to the cause of justice.

"Every law-abiding citizen demands justice for this tragedy that has shaken our sense of decency, but not our resolve, to maintain law and order," he said.

Crum had been a magistrate for 12 years and had previously served as police chief in Delbarton. He won the primary handily and ran unopposed in the general election in the fall.

Williamson, a town of 3,200, sits along the Tug Fork River in a part of the state long associated with violence. Mingo and neighboring McDowell County are home to the legendary blood feud between the Hatfield family of West Virginia and the McCoy family of Kentucky, a conflict dating to the Civil War.

Crum's killing saddened and disturbed Maricopa County, Ariz., Sheriff Joe Arpaio, who has described himself as "America's toughest sheriff" and is a national hero to conservatives on immigration issues. Arpaio himself has been the target of numerous threats, prompting the need for a security detail. Some have said the same protection should be afforded to others who battle criminals.

"Inside one year, two of my deputies were shot, one killed and one nearly killed and now elected law enforcement officials across the nation seem to be being targeted," he said. "The brazenness of these acts is confounding."