Even a Mets fan can be optimistic on Opening Day

Baseball season is finally upon us, which means hope once again springs eternal 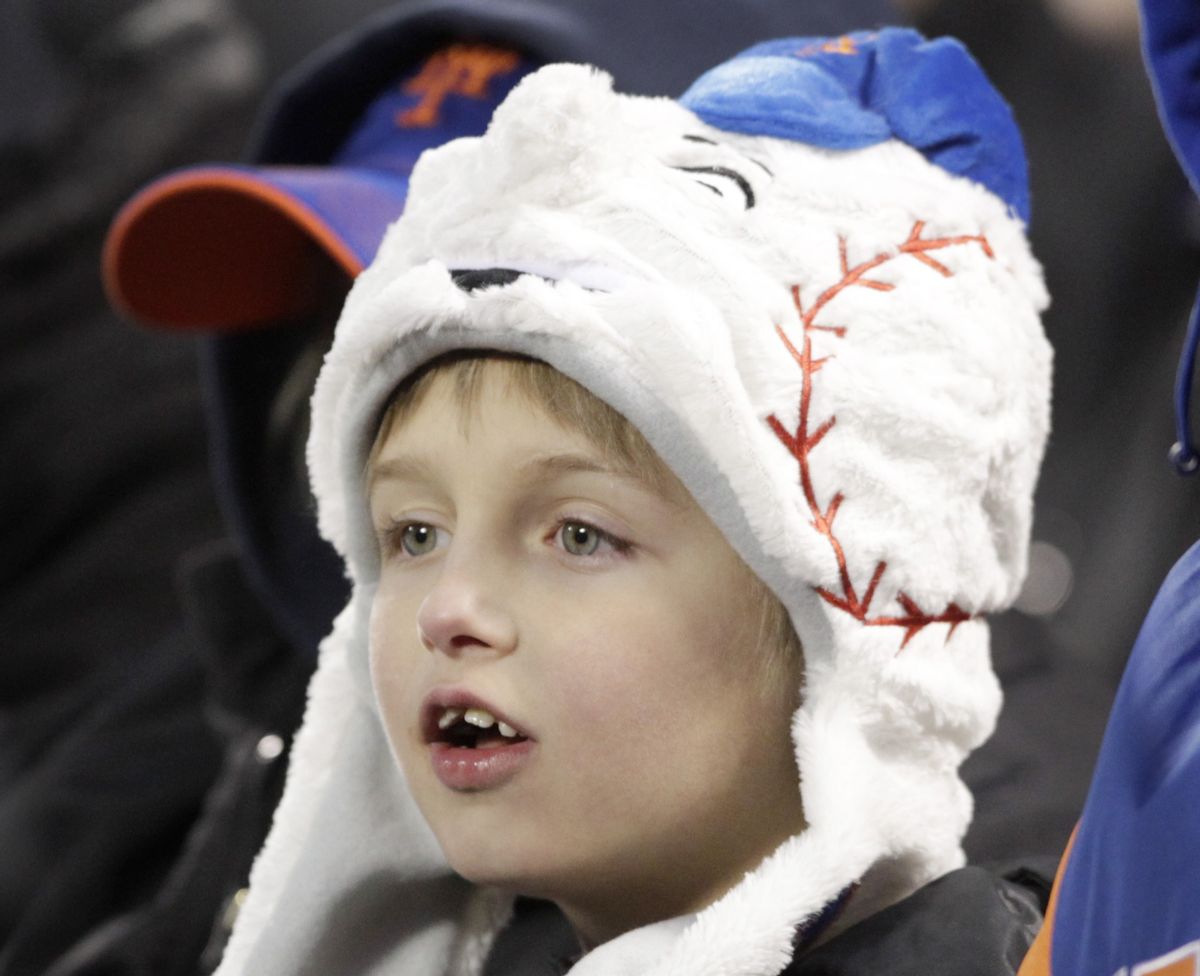 A New York Mets fan is bundled up against the cold during the Mets' baseball game against the San Diego Padres, Wednesday, April 3, 2013, in New York. (AP/Mark Lennihan)
--

It was sunny and clear on Monday for Mets Opening Day, with no noisy planes overhead, so we could hear every bit of the conversations around us. The lulling pitter-patter of “fucks” in row 3 bemused our whole group—not just my father, who was new to Mets baseball, but the veterans of the trip to Flushing. I was there with my old roommate; we used to live in Flushing and walk to games along Roosevelt Avenue, through the carbon monoxide haze above the Whitestone Expressway and past the Iron Triangle's auto repair shops and psychotic guard dogs, restrained from tearing you to pieces by chain-link fences that also allow you to look into their eyes and see the contempt you’ve earned. Getting to the game in this way can be loud and gray and windy and sticky and dirty all at once and altogether disorienting, which is why almost nobody does it. Arriving at the park doesn’t seem like you’ve reached paradise, or that you’re free of any of this filth and misery—these are the Mets we’re talking about, after all. In terms of misery and pride, it’s hard to know where the team ends and the rest of Queens begins, except on Opening Day; then, for three hours, people are happy. On Opening Day, Flushing is a place transformed, all smiles and radiance in a generally fraught place just across the way from where your stolen car’s radials are being hawked at a chop shop.

It’s quite a feat to turn this place positive, even during the good times. Carlos Beltran’s strikeout in the 2006 NLCS was a shocking moment that felt like a fait accompli to most Mets fans I know, which is to say most people I know, having chose my local friends wisely. It is easy to take the baseball out of Flushing—the schedule and the Mets' play does it every September—but it’s harder to take the Flushing out of baseball, even during the offseason. I have written this story before, but when Pedro Martinez signed with the Mets in 2005, he was coming off that World Series title with Boston, but his arm was hanging by wires, and everyone knew that if any one of them snapped it would be bad news. I attended the introductory press conference, which was emceed by Mets PR guru (and current Mets “Harlem Shake” auteur) Jay Horwitz, General Manager Omar Minaya, Manager Willie Randolph and King Pedro himself. Everyone gave a little speech; at question time Minaya called on a local reporter in a room bulging with reporters from the Times, News, Post, ESPN, and everywhere else.

To my horror at the time, and my admiration every minute since, the questioner was my nominal co-worker at The Queens Chronicle, Lloyd Carroll. Horwitz wouldn’t have called on Lloyd, and physically braced himself as Minaya unwittingly went off-script, calling on someone who promptly if not unreasonably dropped trou in the middle of the dog-and-pony show. Carroll asked, more or less, ‘Why are you spending millions of dollars on a tiny guy with a bum arm?’ The room went quiet, choked by decorum, and some other reporters laughed at him with ill-disguised contempt for his upsetting of the natural order of things. Lloyd, good Queens guy that he is, didn’t buy the company line that everything would work out. Mets fans almost never do, and they’re right not to do it, just as Lloyd was correct at the time. Pedro’s Mets career had its moments, but was not a success. Lloyd was right to be skeptical. Faith in Flushing is a brutal religion, but the only thing worse than their god’s swift, sure and repeated punishment is being shut out of the church. On the day that changes for the season—when the gates are thrown open again for another year of this—there are smiles in Queens, near the dead water in Flushing Bay and the chop shops, right there in the presence of all that past.

Of course, unreserved happiness has a way of getting itself monetized, and Opening Day fun comes at a price. We paid $115 each for tickets, then several denominations more for beer and hot dogs and peanuts and popcorn—my father loves popcorn. Compared with the $55 standing room tickets, I think we got a bargain, trying to fit a season’s worth of happiness into one day. There isn’t the same transience to Opening Day that there is to games two through 162—since this is all there is, this is all you worry about. It was a perfect fit for a visiting father, as it’s clearly the only game we’ll go to his year. Like the Mets fans basking in Opening Day's all-summer-in-a-day sunshine, we had a day to unreservedly enjoy baseball, to start anew, to live in a microclimate. Albeit, in this case, one where napkins and plastic bags darted around the field in increasing numbers until, once there were about 50, the crew finally set about cleaning them up, to thunderous applause.

My dad hadn’t seen anything like it. He lives in Arizona, now, and compared with a semi-recent trip to a Diamondbacks game what we saw at CitiField was barely the same sport. He had taken me to Yankees Stadium as a child, and I remember bustling off the train into a crowded stadium, but Yankee Stadium was still terra firma, the known world. Queens was different. On the 7 train, my dad pored over the subway map and scoffed at a landscape dominated by railroad lines, even if wasn’t new to him—I had lived in the borough for the better part of seven years, though I don't anymore. I had met Dad and my cousin at Grand Central, where hordes of fans in Yankees gear tumbled and chanted toward the 4/5, and Mets fans poured even deeper into Manhattan’s bowels to catch the John Rocker Express. As we neared the stadium, first Arthur Ashe Stadium crawled into view, then the gaudy tents for Cirque du Soleil, a non-sequitur against sooty Northern Boulevard, the very site of Fitzgerald’s forsaken ash heaps in The Great Gatsby. The parking lots were so full—this is true—that one friend who drove in left after two hours of searching for a spot. He’s the father of a four-year-old daughter who's still too young for the opener, but he knew that they'd only need to hit it once for it to matter forever. My dad and I missed it 34 times before getting it right.

And yes, there was baseball, and I did a lot of explaining who was who. My dad might have heard of David Wright; he wasn’t sure, but he thought he had. He certainly didn’t know Marlon Byrd, who had a first inning RBI that led me to stand up and do bird-arms and a loud “CAW!” that the wonderful, foul-mouthed drunks behind appropriated from me for the game’s duration. I told him about Cowbell Man and the formerly poorly hyphenated bespoke jersey he wears—which, reading “Cow Bell-Man,” used to make him sound like a bovine hotel worker. Emmy Rossum sang the national anthem and was quite fetching but missed the high note. Rusty Staub threw the first pitch from about 20 feet, and it was his birthday. My dad liked Brookyn beer more than Stone IPA. He clapped his hands at “Ev-‘ry-bo-dy-clap-your-hands!.” He didn’t clap during Lazy Mary. The answer to the trivia question was “30 Rock.” The ball was under hat number 3.

Oh, also, the game: Edinson Volquez was terrible, David Wright okay, and Collin Cowgill excellent. And then, like that, we were leaving, bouncing down stairs, filling up a Metrocard, and standing clear of the closing doors. It was a good day, but it was over, and Dad was set to spend the rest of the season back in Arizona. First, he’d have to come back to Queens one more time, though, and fly out of LaGuardia. He'd have one last look at the stadium from his seat, the exhaust from his plane mixing with that from the exasperated sighs of Mets fans, wilting the bloom from the rose. Until April rolls around again to make believers of everyone, if just for a day.