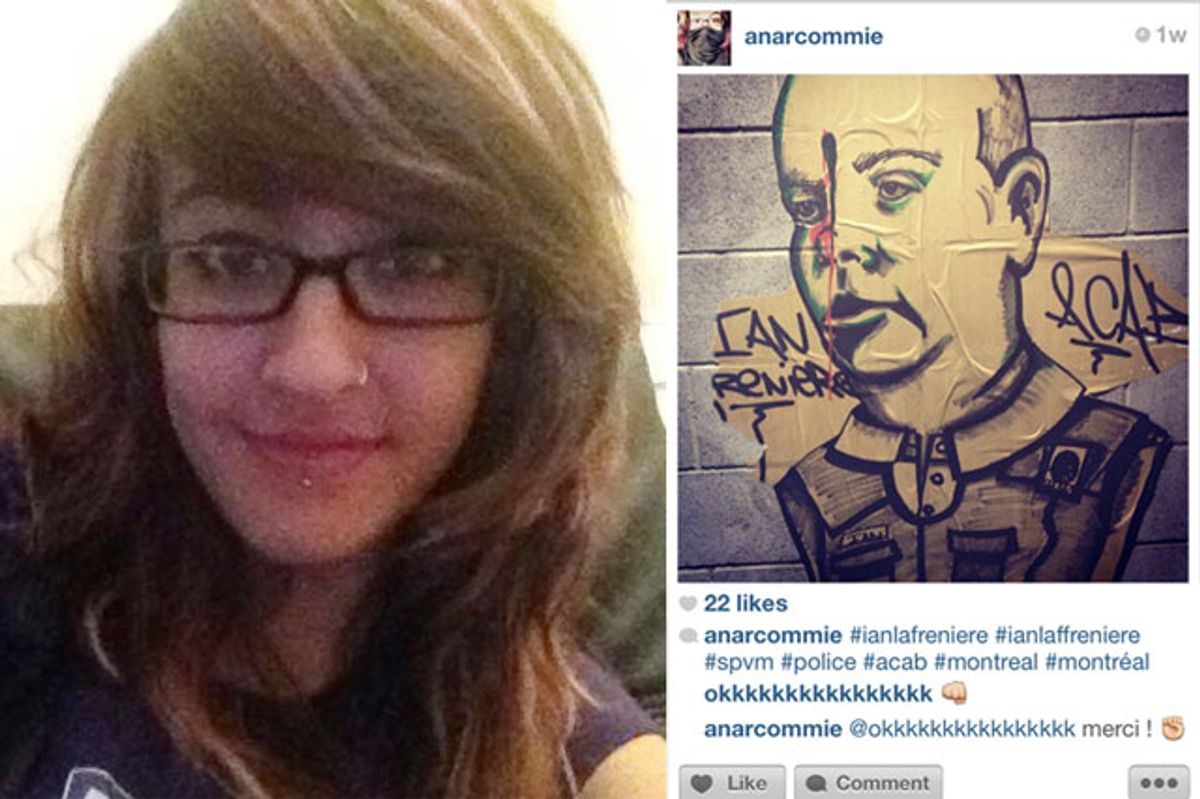 20-year-old artist Jennifer Pawluck was arrested Wednesday morning at 10:30am after posting a picture of anti-police street art on her Instagram feed a few days before.

“Many of my friends do not like the police,” Pawluck told the Huffington Post Québec in French. “I thought it would be funny to put the picture on Instagram. I do not even know who he is, Ian Lafrenière.”

Pawluck took the photo in the Hochelaga-Maisonneuve neighbourhood of Montreal, where she lives, and police arrived early yesterday with a warrant accusing her of uttering threats to the Montreal police spokesperson Ian Lafrenière.

The photo in question depicts a hand-drawn image of Ian Lafrenière with a gunshot wound to the head flanked by the words “Ian Lafrenière” and “ACAB” — a popular graffiti acronym that stands for “all cop[per]s are bastards.”

According to what she told the Huffington Post, Pawluck was brought to the police station and detained for nearly four hours. The arrest warrant alleges that Pawluck acted with intent to harass Lafreniere and gave him reason to fear for his safety.

Last night, La Presse newspaper reported that a police spokesperson made the following statement: “What I can say is that a person has been arrested this morning in connection with threats on the internet. This person was met by investigators.”

Hyperallergic reached out to Pawluck via Facebook to ask about the incident. She indicated that she has not closed her Instagram account and was not asked to remove the controversial image. She also does not know who made the original street art work.

Asked if she will hesitate next time before taking a photo and sharing it on social media, Pawluck replied, “I don’t think so. I mean, art is art. I don’t have a evil mind when I posted a photo like this.”

Asked why she thinks the Montreal police targeted her, she replied, “I don’t think that, it’s just ridiculous. A ridiculous story about a photo on my Instagram.”

Her trial date is set for April 17, but until then Pawluck must not come within one kilometre (~1,000 yards) of police headquarters or Lafrenière’s home.

The incident is sure to cause concern for social media users across the continent. This incident comes on the heels of a report last week by DNAinfo that explained that the New York Police Department is using Facebook and Instagram photos to track criminals.