California’s tough AG has fought stereotypes about her looks since the start of her career. Obama knows better 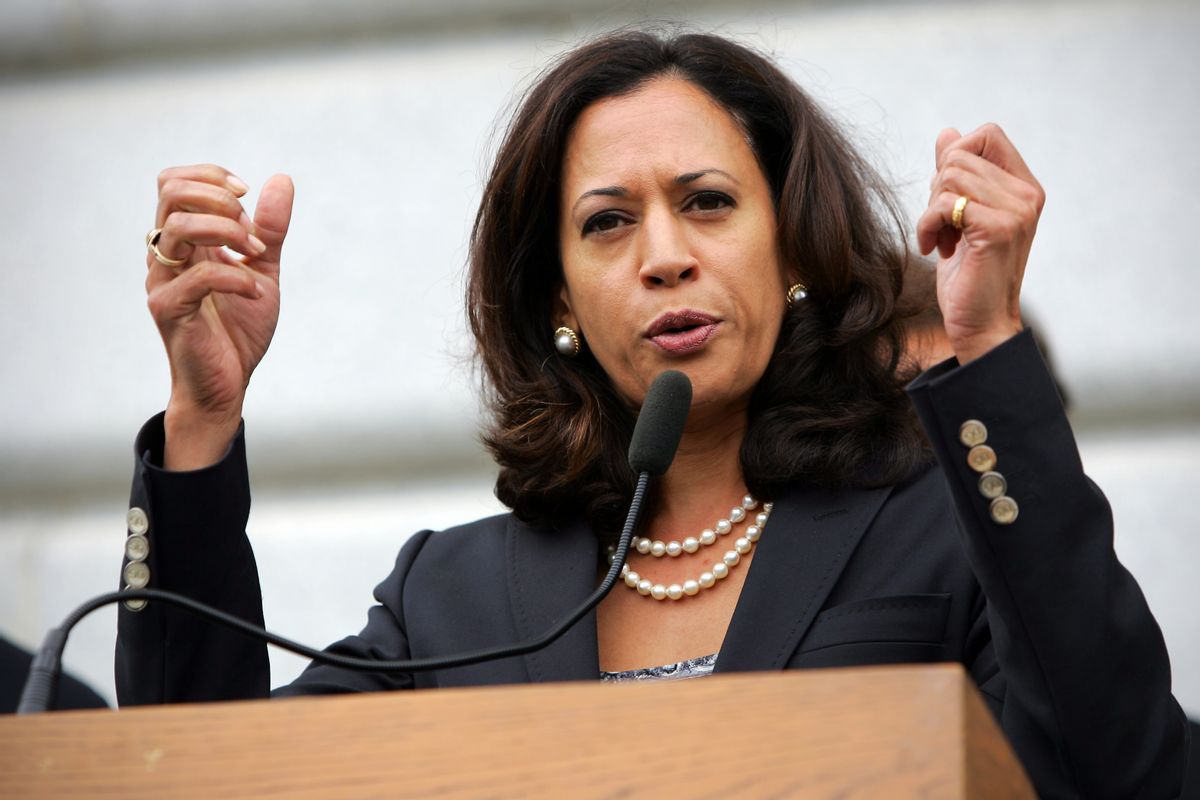 I don’t think President Obama revealed some fatal streak of misogyny when he remarked that California Attorney General Kamala Harris is “by far, the best looking attorney general” on Thursday, during his two-day visit to the state this week. (To be fair, he also called her "brilliant.")

By all accounts, the president and Harris are close allies; she was an early supporter in 2008 when other key California figures, like Los Angeles Mayor Antonio Villaraigosa, San Francisco Mayor Gavin Newsom and even Los Angeles Rep. Maxine Waters were backing Hillary Clinton. She had a plum speaking slot at the 2012 Democratic Convention. I truly believe the president was intending to pay Harris a compliment.

But my stomach turned over anyway. That's because I covered Harris’s first run for local District Attorney for San Francisco Magazine in 2003, and in a career spent writing about the barriers to women’s full participation in the political process, I’m not sure I ever faced the blatant gender stereotyping and disrespect I did in that race.  Due to Harris's earlier relationship with San Francisco Mayor Willie Brown, the allies of District Attorney Terrence Hallinan felt free to smear her with charges she’d relied on her looks and effectively slept her way to the top.

In fact, Harris had a long career in Alameda County before she came to work for Hallinan in San Francisco, only to challenge him in 2003 over the management of his office. She’d made sex-trafficking and the plight of young prostitutes a focus of her work. Her gruff former boss, Alameda County District Attorney Tom Orloff, couldn’t say enough positive things about her work when I profiled her. She was arguably more conservative than the ultra-progressive Hallinan on prosecution, but mainly, she was committed to cleaning up an office that had been accused of habitual mismanagement, even by people who admired Hallinan. She started out way down in the polls, but backed by wealthy reformist San Franciscans (helped no doubt by her still friendly ties to Willie Brown) she pulled ahead of Hallinan as the race approached the finish line.

And that’s when I got some of the most disturbing and offensive calls I’ve received in all my years of reporting, from people – Democrats -- who wanted to share things about Harris’s personal life. The conviction that her connection with Brown, as well as her being a single woman in a political world where people are coached to marry, even if unhappily, kept the Hallinan folks confident they had a way to tarnish Harris even as she won over voters. Their stories were lurid and dumb and irrelevant to Harris’s (significant) qualifications for the office. I didn’t use any of it, of course, and to this day I avoid one of the sources who tried to “inform” my coverage. She won without a runoff, and I admit I was happy about that.

Harris went on to be a good district attorney, enduring huge abuse for her opposition to the death penalty and suffering through a scandal with the city's crime lab. As state attorney general, she fought more energetically than most of her counterparts for a mortgage fraud settlement that wasn’t perfect, but is better than what had been on the table to begin with. Agree with her or not, she is and always has been enormously competent, and the long-term efforts to suggest her success has to do with her looks more than her achievements are troubling.

I doubt Obama knew any of the lurid history of Harris’s opponents smear attempts.  I assume he thought he was just paying someone he admires a compliment. But most women in public life have a complex relationship with their appearance, whether they’re as attractive as Harris or not. Those of us who’ve fought to make sure that women are seen as more than ornamental – and that includes the president – should know better than to rely on flattering the looks of someone as formidable as Harris. Why not praise her Homeowners’ Bill of Rights? Calling her “by far, the toughest attorney general” would have had a better ring. There is so much to say about Kamala Harris; the president had far better options than praising her looks.