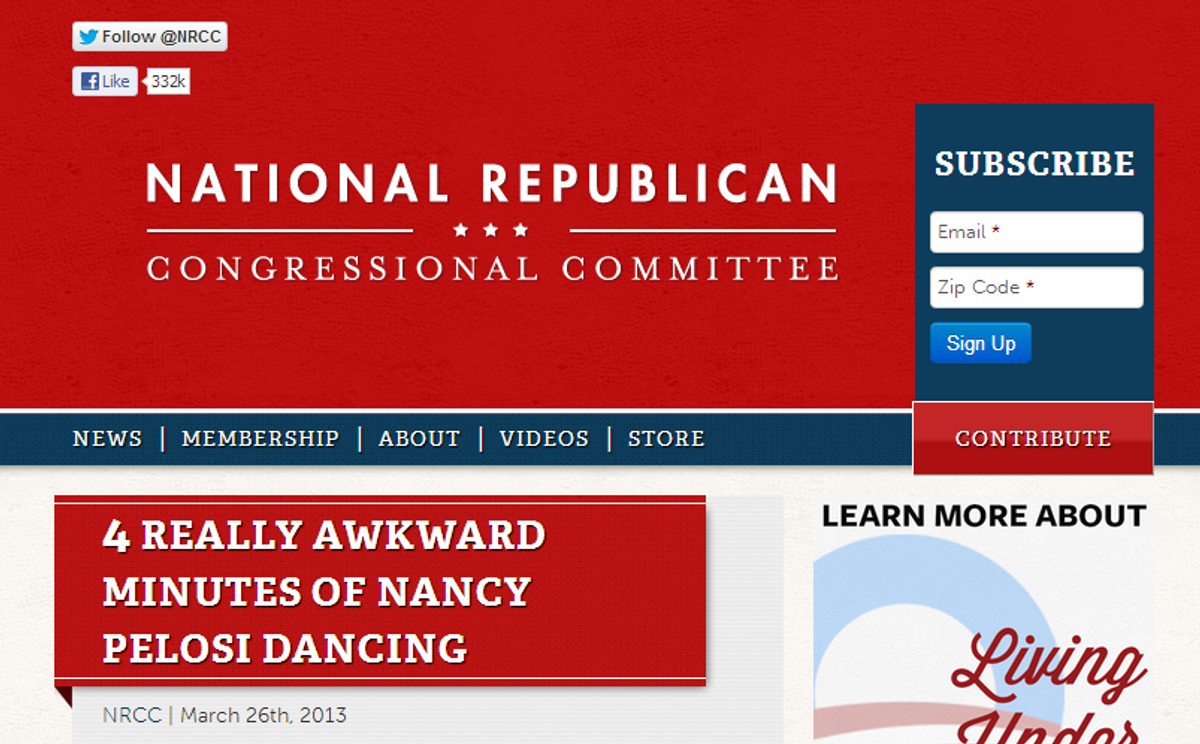 The GOP is going to make its own BuzzFeed, apparently. National Journal's Brian Fung "won the Internet" yesterday with his report on the National Republican Congressional Committee's thrilling new website, which has a sidebar, and features lists.

The NRCC also hired 20 writers (the GOP will save publishing!) to create conservative versions of the soul-deadening crap BuzzFeed's list-generators are forced to compile. While it may sound like the aim is to appeal to a new demo -- kids who remember the '90s and who also believe that balancing the federal budget with deep domestic spending cuts will also somehow spur economic growth -- it's actually not quite that ambitious: The point is to boost traffic to the NRCC website, and therefore to increase donations to the NRCC. It appeared to be working, too, even before the entire liberal Internet stopped to point and laugh at the notion of a "conservative BuzzFeed," giving the project a massive amount of attention.

It actually isn't ridiculous. It's certainly not doomed to failure. If there's one group of Internet users that loves sharing viral content with everyone they know, it's conservatives. Long before broadband and smartphones, conservatives were forwarding classic viral content to everyone in their address books. "The Clinton Body Count" was sort of the original "600 Hilarious Autocorrect Fails." As anyone who is Facebook friends with conservative family members will tell you, right-wingers will share anything with anyone. The very existence of birtherism is a strong argument for the conservative movement's ability to "win" at the viral game.

Which is not to say that the movement kept up with the times. Because conservatives, by and large, are an older set than liberals, the conservative viral content medium of choice has remained email forwards as liberals moved on to Tumblr.

There is clearly a market for easily shared Internet ephemera marketed specifically to older cranks, and the savvier conservative media figures are already serving it. Michelle Malkin had the brilliant idea to start an entire site that literally just puts Twitter posts in one easy-to-find place so old people can read them without having to figure out Twitter. (Sample headline: "Awesome: Michelle Malkin destroys Univision 'real journalist' over labels and bias." And then it's just an embed of some dumb Twitter argument Malkin had. That is seriously everything on this site.)

Much like explicitly conservative movies are generally just crappier versions of regular movies with populist Tea Party dogma awkwardly inserted, conservative viral content will look like the regular kind -- dumb lists stolen from elsewhere with most of the words replaced with small animated images -- only with a series of quickly recognizable right-wing bugbears in the place of "humor" or "cute animals." 24 epic liberal media fails! 21 terrifying untrue facts about Agenda 21!

Really the only problem with the NRCC plan is that the Internet is already awash in conservative viral content, some of it already coming from BuzzFeed. This is a point conservatives refuse to get, but BuzzFeed isn't liberal. (Though keep in mind that conservatives also consider Politico left-wing -- they don't practice a particularly sophisticated form of media criticism.) Editor Ben Smith practices old-fashioned newspaper reporter objectivity, and the reported politics coverage mainly does as well. (BuzzFeed D.C. Bureau Chief John Stanton, for example, is a great source for what congressional Republicans are thinking on immigration.)

If an audience exists for a BuzzFeed of the right, BuzzFeed will happily be the BuzzFeed of the right, because capitalism. In fact, they are already producing cheap viral crap for conservatives to like on Facebook. Recent attempts include What It Feels Like Being a Conservative on the Internet, which went viral but was deemed "fail" by the BuzzFeed community, and "7 Things Democrats Would Have Freaked Out About if Bush Had Done Them," which was voted both "win" and "fail."

The author of that latter piece, Benny Johnson, was hired (from Glenn Beck's the Blaze) basically explicitly to create viral conservative content. (Well, and regular viral content, too.) He's also recently big-upped Utah Republican congressman Jason Chaffetz and -- pay attention, NRCC -- counted down "13 Ways Republican Can Win the Internet." (I can sum up: It seems that the RNC postmortem was tl;dr.)

Still, the point of the NRCC's project is pretty much only to separate conservatives from their money, and those sorts of ventures have a pretty decent success rate. I'm sure the NRCC will do fine.