There are no "illegal immigrants" 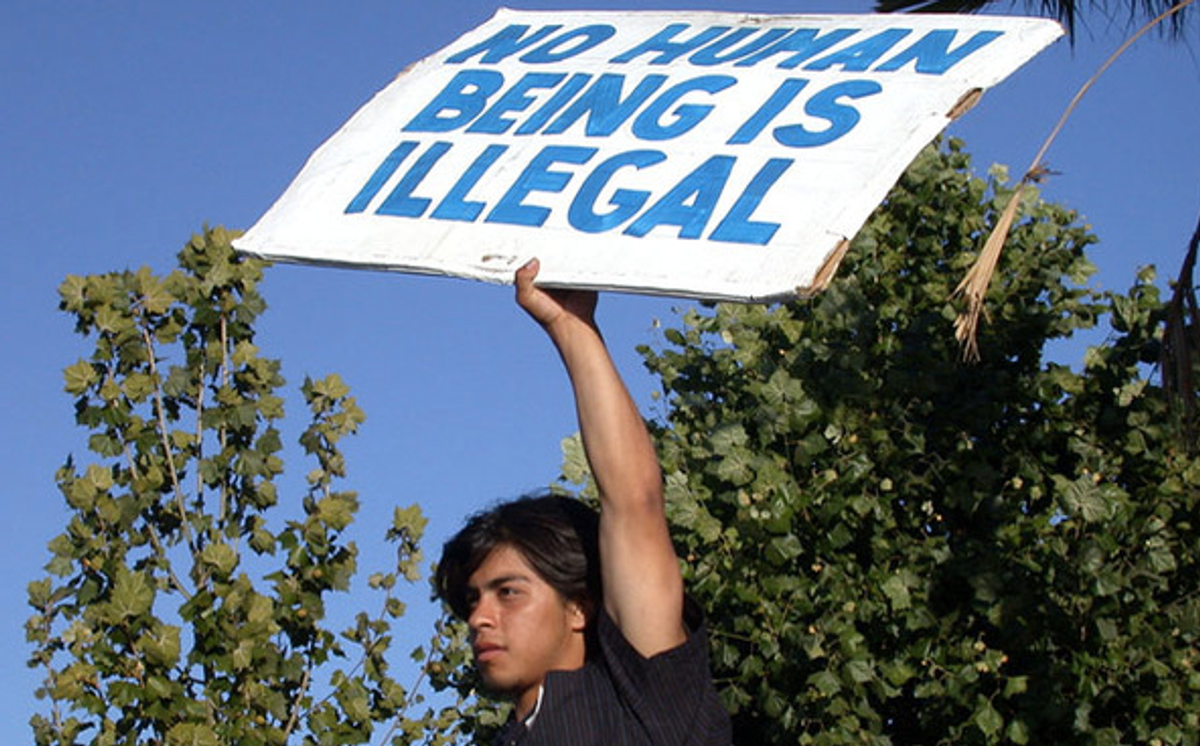 As one of the world's largest news outlets, the Associated Press's linguistic mandates significantly shape the broader vernacular. So when the organization this week decided to stop using the term "illegal immigrant," it was a big victory for objectivity and against the propagandistic language of bigotry.

Cautious AP executives did not frame it exactly that way. Instead, editor Kathleen Carroll portrayed the decision as one in defense of grammar, saying that the term "illegal" properly "describe(s) only an action" and that it is not an appropriate label to describe a human being.

"Illegal," of course, has been used as more than a mere label -- it has for years been used as an outright epithet by xenophobes. They abhor the notion of America becoming more diverse -- and specifically, more non-white -- and so they have tried to convert "illegal" into a word that specifically dehumanizes Latinos. Thus, as any honest person can admit, when Republican politicians and media blowhards decry "illegals," they are pretending to be for a race-blind enforcement of immigration laws, but they are really signaling their hatred of Latino culture.

How can we be so sure that dog-whistle bigotry is the intent? It's simple, really. Just listen to who is -- and who is not -- being called an "illegal."

Almost nobody uses the term to attack white immigrants from Europe or Canada who overstay their visas. Nobody uses the term to describe white people who break all sorts of criminal laws. Indeed, nobody called Louisiana Republican Sen. David Vitter an "illegal" upon revelations about his connection to a prostitution service, nor did anyone call Bernie Madoff an "illegal" for his Ponzi schemes.

Instead, the word is exclusively used to denigrate Latinos who entered the country without authorization. Coincidence? Hardly, especially because the term "illegal" is used to describe Latinos whose immigration status is not even a criminal matter.

Yes, as New Jersey Gov. Chris Christie (R) noted back in 2008, though "the whole phrase of 'illegal immigrant' connotes that the person, by just being here, is committing a crime," in fact "being in this country without proper documentation is not a crime."

If Christie runs for president in 2016, he will likely get flak for that comment from anti-immigrant Republicans. But he was 100 percent correct.

"'Illegal presence,' as the offense is called, is not a violation of the U.S. criminal code," notes the Newark Star-Ledger, adding that while it is "a violation of civil immigration laws (and) the federal government can impose civil penalties" a person "cannot be sent to prison for being here without authorization from immigration authorities."

Recognizing these facts is not to condone unauthorized entry into the United States. But it is to note a telling discrepancy: Latinos with non-criminal immigration status are called "illegals" but white people committing decidedly criminal acts are not called the same. Worse, the term is used so often and in such blanket fashion against Latinos that it ends up implying a description of all people of Hispanic heritage, regardless of their immigration status.

What's amazing is that Republican media voices, who so often invoke such incendiary language, simultaneously wonder why the Republican Party is failing to win the votes of people of color and consequently losing so many elections. Somehow, the GOP doesn't understand what the Associated Press realized: Organizations -- whether political parties, media outlets or businesses -- can no longer expect to insult and slander people of color and still have a viable audience.

Those that do not realize that truth will inevitably find themselves as lonely and as marginalized as today's GOP.