These forces of nature may "run the world," but they won't cop to the F-bomb 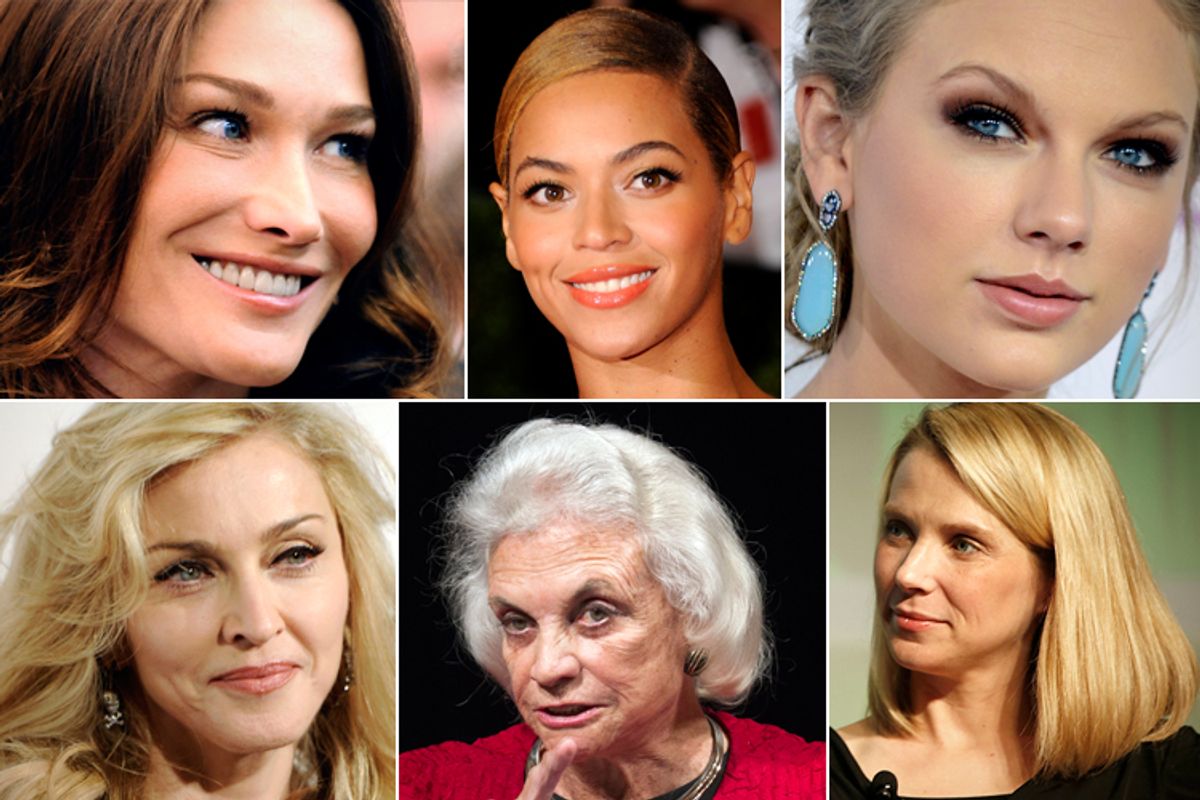 Beyoncé's fierceness practically blew the lights out at the Super Bowl this year. Madonna's decades-long career choices have landed her on the Catholic Church's and the Kremlin's enemies list. Sandra Day O'Connor was responsible for crucial votes in Supreme Court rulings on abortion and affirmative action. These are women who are virtual forces of nature, whether or not you agree with them on every issue.

So why does the word "feminist" scare them so? Don't they know that, per Salon's Mary Elizabeth Williams: "If you believe in the strength of women ... you’re soaking in feminism"?

A list of other high-profile, force-of-nature women who may "run the world," but won't cop to the F-bomb.

“That word [feminist] can be very extreme,” she said in an interview with Vogue UK, before acknowledging: “I guess I am a modern-day feminist. I do believe in equality ... Why do you have to choose what type of woman you are? Why do you have to label yourself anything? I'm just a woman, and I love being a woman."

"I am not a feminist, but I do believe in the strength of women."

“I’m not at all an active feminist. On the contrary, I’m a bourgeois. I love family life, I love doing the same thing every day.”

“I don’t really think about things as guys versus girls. I never have. I was raised by parents who brought me up to think if you work as hard as guys, you can go far in life.”

"I don’t think that I would consider myself a feminist. I think that I certainly believe in equal rights, I believe that women are just as capable, if not more so in a lot of different dimensions, but I don’t, I think have, sort of, the militant drive and the sort of, the chip on the shoulder that sometimes comes with that. And I think it’s too bad, but I do think that feminism has become in many ways a more negative word. You know, there are amazing opportunities all over the world for women, and I think that there is more good that comes out of positive energy around that than comes out of negative energy."

“Well, I don’t think of myself as a feminist at all. As soon as we start labeling and categorizing ourselves and others, that’s going to shut down the world."

"That [feminist] debate has been there for ages! It's boring! We're kind of feeding this thought in talking about it. If we talk about something else, people will think differently, and we'll change it. Because we're responsible, as women -- journalist, actress, whoever -- just to move on ... [The label "feminist"] just puts people in a stereotyped way of thinking. I think creation and doing, being active, is more important than talking about it."

"I’m not a feminist. I hail men, I love men, I celebrate American male culture – beer, bars, and muscle cars."

“I never did [call myself a feminist]. I care very much about women and their progress. I didn’t go march in the streets, but when I was in the Arizona Legislature, one of the things that I did was to examine every single statute in the state of Arizona to pick out the ones that discriminated against women and get them changed.”

"[I don't identify as a feminist] because I think it would isolate me. I think it’s important to do positive stuff. It’s more important to be asking than complaining." She added: "You could probably call my mother a feminist, and I watched her isolate herself all her life from men, and therefore from society."

"I don’t ever think about [feminism] ... I don't see that there's any need to be aware of being a woman in this business. It just seems a waste of time."