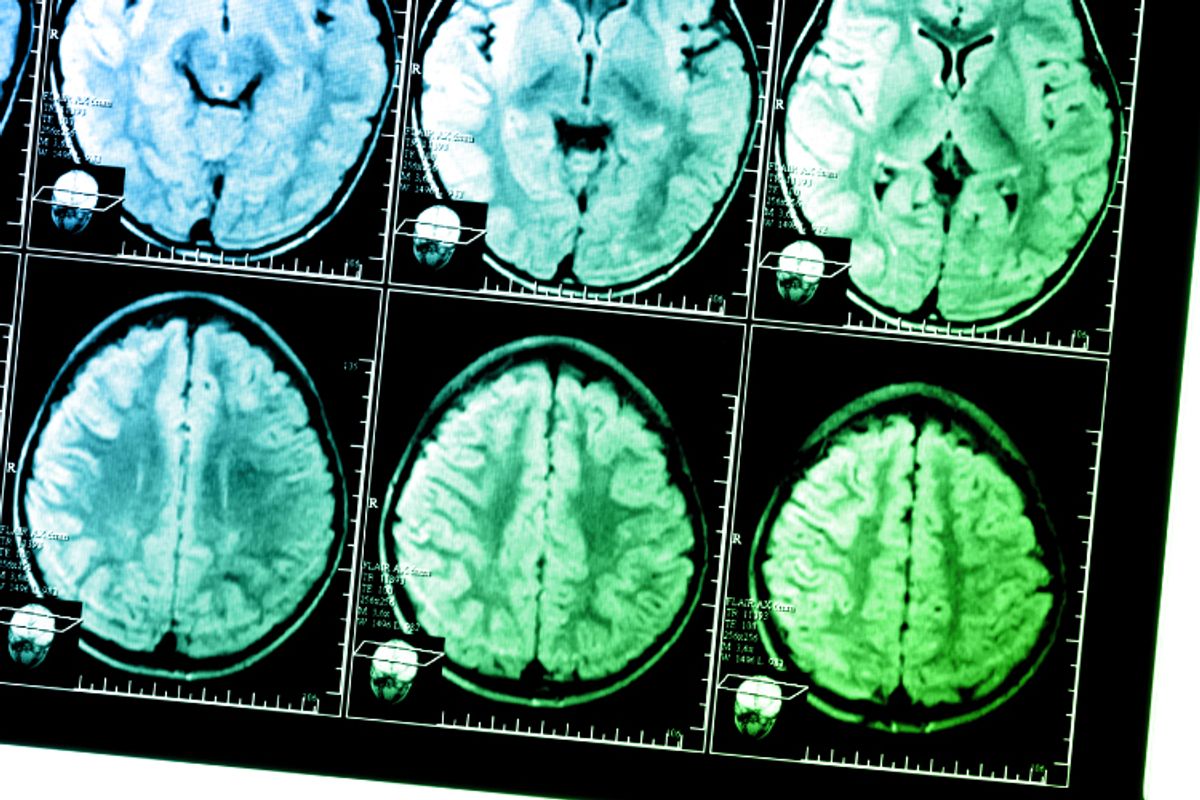 Reading the news, you might be excused for thinking that scientists are on the verge of understanding the human brain.

Researchers at the National Institutes of Health are diligently mapping all 100 trillion neural connections between our 86 billion neurons, and President Obama has just announced a $100 million Brain Research Through Advancing Innovative Neurotechnologies Initiative that will study all those networks in action.

The neurologist Robert Burton is skeptical, to say the least. His new book, "A Skeptic's Guide to the Mind," is a scathing indictment of reductionism in all its guises, and a stirring call to consider whether scientists are even asking the right kinds of questions. Recently I met with Burton in his Sausalito, Calif., home. Over coffee he explained to me what neuroscientists are getting wrong, how neurology can be improved, and why the mind is so perplexing in the first place.

In your previous book, "On Being Certain," you argued that our sense of certainty is totally unreliable. How does your new book expand on that idea?

A number of mental states that feel like conscious thought are actually involuntary mental sensations. Originally I focused on the feeling of knowing – from a hunch to the sense of utter certainty. I now realize that feelings of knowing are a small part of a larger brain-generated mental sensory system that includes the sense of self, the sense of choice, control over our thoughts and actions, feelings of justice and fairness, and even how we determine causation. These sensations also comprise much of what we experience when we talk about the mind.

You write that even after 2,500 years of contemplation and research, we still have "no idea what a mind actually is." Why do we keep hitting our heads against the wall?

We can't help ourselves. Given our brain's tendency to seek out patterns and avoid ambiguity, we are physiologically condemned to question the very entity that is responsible for generating the questions. This paradoxical state is likely to be at the core of many age-old philosophical conundrums. For example, because we have an innate sense of agency and yet simultaneously believe that mental states must have preexisting physical causes, we are left debating free will versus determinism. If we didn't have a sense of agency, I'm not sure that the free will question would even arise.

So these questions are fundamentally misguided.

The mind exists in two separate dimensions – as the subjective experience of what goes on inside our heads, and as abstract concept. Neither can be objectively assessed. We can study brain function and ultimately arrive at a good working model of how the brain works. However, there is no scientific method to address subjective experience. The Holy Grail of neuroscience would be to understand how the brain converts biological activities into subjective consciousness. Presently we have no clues, not even reasonable suspicions. The ongoing failure to even formulate the problem coherently is reflected in the inability of neuroscientists and philosophers of mind to come up with a reasonable hypothesis, let alone convincing experimental data.

President Obama has recently proposed a vast Brain Research Through Advancing Innovative Neurotechnologies Initiative. Does his brain-mapping project have a legitimate premise?

I'm not exactly sure what the premise is. According to a White House spokesman, "The BRAIN Initiative will accelerate the development and application of new technologies that will enable researchers to produce dynamic pictures of the brain that show how individual brain cells and complex neural circuits interact at the speed of thought." Such a project is likely to produce abundant new data regarding electrical brain activity, but I don’t sense any great underlying new idea or intuition. Data is informative, but what is really needed is some intellectual innovation that goes beyond technology – both present and future.

How would the money be better spent?

The real question is, how do you find and nurture a future Einstein of the mind. Improving our technologies without an accompanying breakthrough in thinking about the brain-mind connection is equivalent to upgrading a linotype machine to the world’s greatest printer without having something to say.

You're also skeptical of existing initiatives such as the NIH's Human Connectome Project.

To use another analogy: Believing that knowledge of brain wiring can tell us the nature of consciousness is like predicting what sound will come out of a set of speakers by looking at wiring diagram of the component parts.

In your book, you even open up the possibility that the mind might extend beyond the individual. Can you explain?

Nature provides us with innumerable demonstrations of organisms with a collective "mind" exhibiting group behaviors (from ants directing traffic to termites building complex edifices). These are not individual behaviors arising from individual brains. Even organisms without nervous systems, such as slime mold, can collectively solve complex mazes in order to obtain food. If a mind is considered to be that “entity” which controls our thoughts and actions, and we accept that humans are members of the animal kingdom, we should at least entertain the possibility that there are aspects of our minds that extend beyond the individual brain. However, this concept goes contrary to our felt experience of a unique mind under our individual control.

Studying the roots of empathy or altruism by imaging single subjects isolated in an fMRI scanner seems as inadequate as observing one termite and trying to figure out how termites build mounds.

Can you give me another example of wrong-level thinking?

The belief that mirror neurons account for our ability to read minds and be empathic. The initial discovery was that monkeys had a subset of neurons that fired both when the monkey reached for a peanut and when the experimenter reached for the same object. Further, the movement had to appear intentional – as though the hand was reaching to grasp the peanut in order to eat it. The fact that these brain cells fired only when they detected similar intentions led a number of prominent researchers to conclude that the monkey was reading the experimenter’s mind.

But knowing a motor intention at the lowest level – namely that the experimenter intends to eat the peanut – tells you nothing about the higher-level motivation of the experimenter. Perhaps he's bored or wants to see if his supply of peanuts is stale. This is equivalent to arguing that when you see a poker player reach for his chips to make a bet, you can know whether his underlying intention is to bluff you. Knowing someone's motor intentions is not the same as being able to read someone's mind. Neurons don’t read minds or have any notion of empathy. These phenomena occur at a higher level of brain organization.

Can overreliance on fMRIs hurt someone personally?

Consider how you’d feel if, six months following an automobile accident, a close family member remained in a clinically diagnosed persistent vegetative state without any reasonable possibility of recovery. Then, as a result of being a test subject on a new fMRI scanning technique, you were told by her researchers that she was fully conscious and aware of her environment. I cannot imagine the horror and desperation you’d feel trying to cope with the knowledge that she was both fully unresponsive and yet allegedly conscious and aware.

To understand my concerns, take a moment to consider how the researchers came to this conclusion. The researchers asked the clinically unresponsive woman to imagine playing tennis and walking around her house. When her fMRI revealed the same activation patterns seen in normal volunteer subjects, the researchers concluded this was proof positive that the woman was deliberately performing these tasks.

But this conclusion presupposes that we know what aspects of cognition occur unconsciously and which require conscious initiation. Presently we have no idea of the upper limits of purely subliminal cognition. We drive on auto-pilot. We dream of walking around our house. We are constantly performing myriad mental activities without any awareness of them.

This technique of asking patients to imagine certain motor acts has proved to be of great value in allowing conscious patients physically unable to communicate – such as patients with locked-in syndrome – to manipulate their own fMRI to describe their interior mental states. In essence, the fMRI becomes a high-tech typewriter. But when patients cannot voluntarily respond to complex questions about their mental states, we have no direct way of knowing what, if anything, they are experiencing. And that’s what we should be telling the family, rather than saying that the fMRI indicates a specific level of consciousness.

You argue that neuroscience is different from other sciences because the mind is both the subject of investigation and the instrument with which neuroscientists investigate the mind. Perhaps it isn't the most reliable arrangement....

It's the metaphoric equivalent of asking a known con man for his self-appraisal. The road to a better understanding of the mind should begin with a healthy dose of humility and skepticism. Question your methodology and your motivation. Recognize when you have reached the limits of your data and have moved into the realm of speculation. Despite the demands of the media, avoid the urge to publish premature or oversimplified conclusions. Above all, keep in mind the unavoidable philosophical limits of neuroscience.

You propose that neurological studies should be supplemented with brief autobiographies of the researchers involved, revealing their personal backgrounds and beliefs. Why is that important?

Data can be assessed via scientific method; conclusions are stories told by scientists based upon the evidence they have acquired, but filtered through their own idiosyncratic biases. Though public self-revelation runs counter to the traditional presumption that scientists can be entirely objective, it’s time that we step back from thinking that scientific conclusions about the mind are free from personal perceptions and motivations. Our understanding of neuroscience would be very different if every study contained a paragraph or two in which the author revealed his or her understanding of what agendas drove the study.

What information would you include in your own autobiography?

I was a liberal arts major, prefer stories to hard facts, questions to answers. I prefer ambiguity, mystery and awe to bottom-line explanations. I'm personally offended by fundamentalist and reductionist beliefs, be they religious or unjustified scientific pronouncements. I recognize and often rejoice in the absurdity of the human condition, and wouldn't want it any other way. If scientists arrived at a final theory of everything, I would try not to read it.

One thing you left out of your autobiography is that you've published three novels. What can you do in fiction that can't be achieved by neuroscience?

The texture of consciousness is the language of literature, not the data of science.