Remembering the Holocaust one scrap at a time

Memories and a revelation at a gathering of survivors 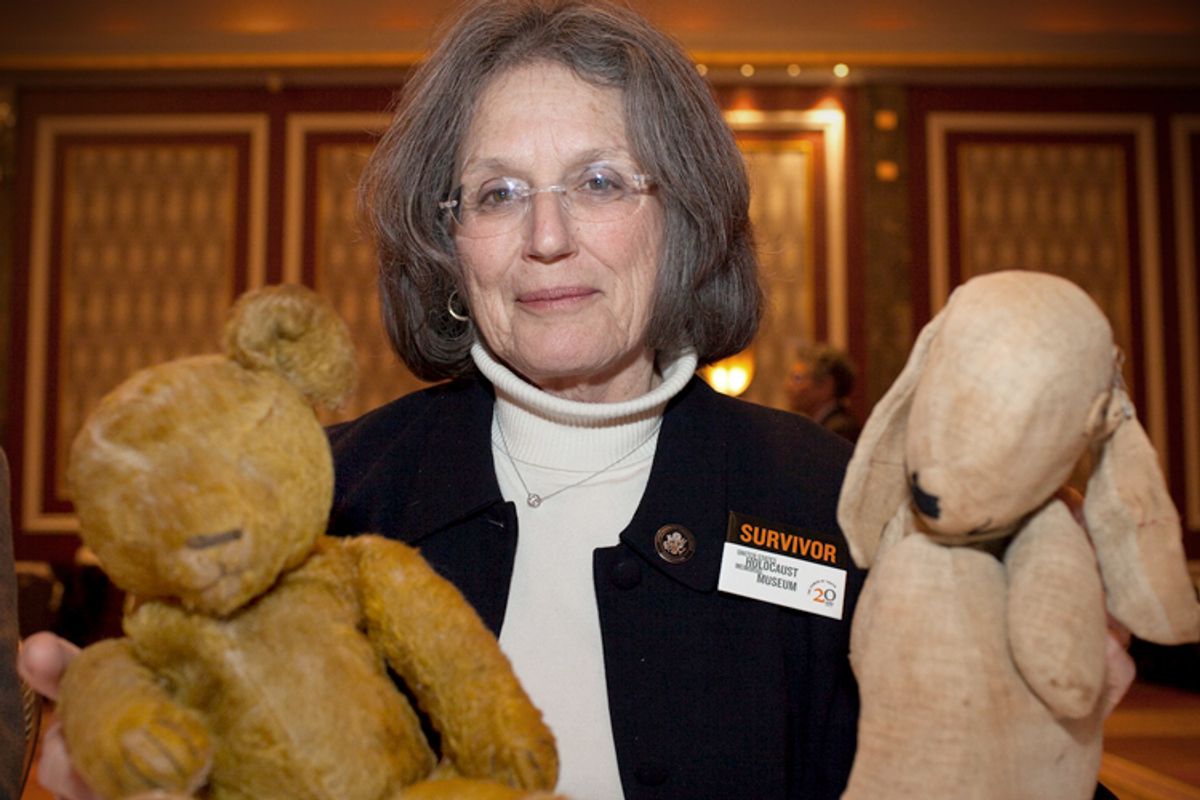 Eva Elisabeth VonAncken was a small child in Hungary during the war and spent time in the Szeged ghetto, the Strasshof concentration camp near Vienna and Thereseinstadt, where she and her mother were liberated on May 8, 1945. (Miriam Lomaskin/US Holocaust Memorial Museum)
--

For its 20th birthday this year, the United States Holocaust Memorial Museum went on “tour” – its word, not mine.  In New York, at a Hilton Hotel, 2,000 people stopped by, 200 of them Holocaust survivors. The survivors wore badges that said “SURVIVOR” in orange letters; they were honored with a noon tribute.  Some put pins in a corkboard map to show where they were at the war’s end – one pierced the border of then-Russia and Afghanistan – and others left their coordinates in a guest book. “Ashwitz – good to be alive.” “In Limoges, France, convent Notre Dame de Nazareth.”  “In the field Fel de Fink – aboard train, after 7 camps @ age 17!!”

The “tour” seems to have a mix of motives – educational, affirmational, memorial.  The museum offers a day of public programming on various historical aspects of the Holocaust and an interactive “family” section where young people can express the meaning and values of tolerance. But the most museum-like aspect is archival: Curators have been lining up appointments in five cities – Los Angeles, New York, Washington, Chicago and Boca Raton, Fla. – and evaluating survivors and veterans’ relics and listening to their stories.

Those who came to the Hilton bearing a past life’s few treasures intended to donate them to the museum’s collection, from which artifacts for permanent or temporary exhibition are chosen.  The museum, which has been acquiring artifacts nearly 10 years longer than it’s been opened, has some categorical collection rules: No duplicate photographs, unless they are inscribed. No contemporary artwork memorializing the Holocaust. No human remains.  “At least a couple times a year, I’ll get a call from someone who thinks they have a lampshade,” said Kyra Schuster, a museum curator, referring to the rumor that a Nazi guard made lampshades out of Jewish skin.  “When ‘CSI: NY’ did the Holocaust black market episode, sure enough, the next day …”  So great is the urge to wring meaning from horror that sometimes, survivors offer to will the museum the number tattoos, from Auschwitz, on their forearms.

To the Hilton, a grandmother brought a stuffed rabbit that had been made for her in Theresienstadt, the “artists’ camp,” where she’d been deported as a child.  An American veteran’s son brought a Nazi pennant, from Hitler’s famous rallies in Nuremberg, that his father had saved. A survivor, hidden in the French countryside of Le Chambon, brought her false identity papers, and a wartime postcard from her parents, who escaped to Switzerland.

The day’s most celebrated acquisition was a pair of camp uniforms belonging to Henry Dressler and his father, who both survived on Schindler’s list.  Dressler had kept them – pants, shirts with fading numbers sewn on with wide, rough stitching, and blue knit caps – until he’d died, and he’d willed them to the museum. “Apparently it’s very rare to get them with the caps,” a P.R. rep whispered. His niece, Diane Spiegel Belok, who lives in Teaneck, N.J., brought them across the river.  When a white-gloved woman arranged them on the linen-draped table, she sobbed.  “It’s hard to part with them,” she said later. “He didn’t talk about it until 'Schindler’s List' came out.  I didn’t even know these existed.”

Mostly, people brought paperwork – documents and many, many photographs, in loose stacks in folders and in plastic bags, but not in albums. Mira Rosenblatt, who grew up along the Polish-German border, brought only pictures of her pictures.  “I donated in the beginning. I gave away too much to the Schpielberg people,” she said, meaning the Steven Spielberg oral history project that collects survivor “testimonies,” and intoning the Hollywood director’s last name in proper German.

But she began, again, the stories and her daughter, Lillian, tried to speed things up.

“She was in a labor camp where they made soldiers’ uniforms —“

“— until they were sent on a death march.” Mira shot Lillian a piercing look.

“No, first to a German woman,” said Mira, now impatient. What followed was something Lillian, and Schpielberg, didn’t know: Mira and a friend hid with an old German woman but fled when a neighbor threatened to report them. Unluckily, they then met a German officer.  Mira persuaded him to save them.

“Is this in your testimony?” the curator asked.  Mira shook her head.

“No. I was feeling sick that day. Mostly my husband talked.”

As 7 p.m. approached, and the tour’s portrait studio and the postwar maps came down, one windowless room was still full.  Inside, a dozen database savants helped survivors and their families search the 183 million records of the International Tracing Service, the cross-continental paperwork system the International Red Cross developed to reunite families after the war.  Many of the records are from the functionally named “displaced persons camps,” or DP camps, where survivors were shuttled after concentration camps were liberated.

At one station, a blond woman squinted, frustrated at a discrepancy between records of her mother’s maiden name. The researcher changed tactics and searched the blond woman’s own name.

“When were you born?” the researcher asked.

A couple more clicks, and then a gasp.  A yellow-beige card appeared, with her name and birthdate.  “Oh – my – God,” she said, leaning in.  “Oh there I – ohmygod. I can’t even tell you what’s going through my head – what’s – from the DP camp! This is unbelievable.”

She stared quietly for a moment at the registration card with her name on it.

“I never would have thought to fill this out myself,” she said of the search form.  Then she turned to me.

“Don’t use my name, it’s too personal,” she said.  “It’s a pretty extraordinary moment for me, to see records relating to my existence.”

She stared for a few moments more and then turned back.