Top 5 investigative videos of the week: Moon property for sale

From interplanetary real estate agents to plain old con men, a look at the best docs YouTube has to offer 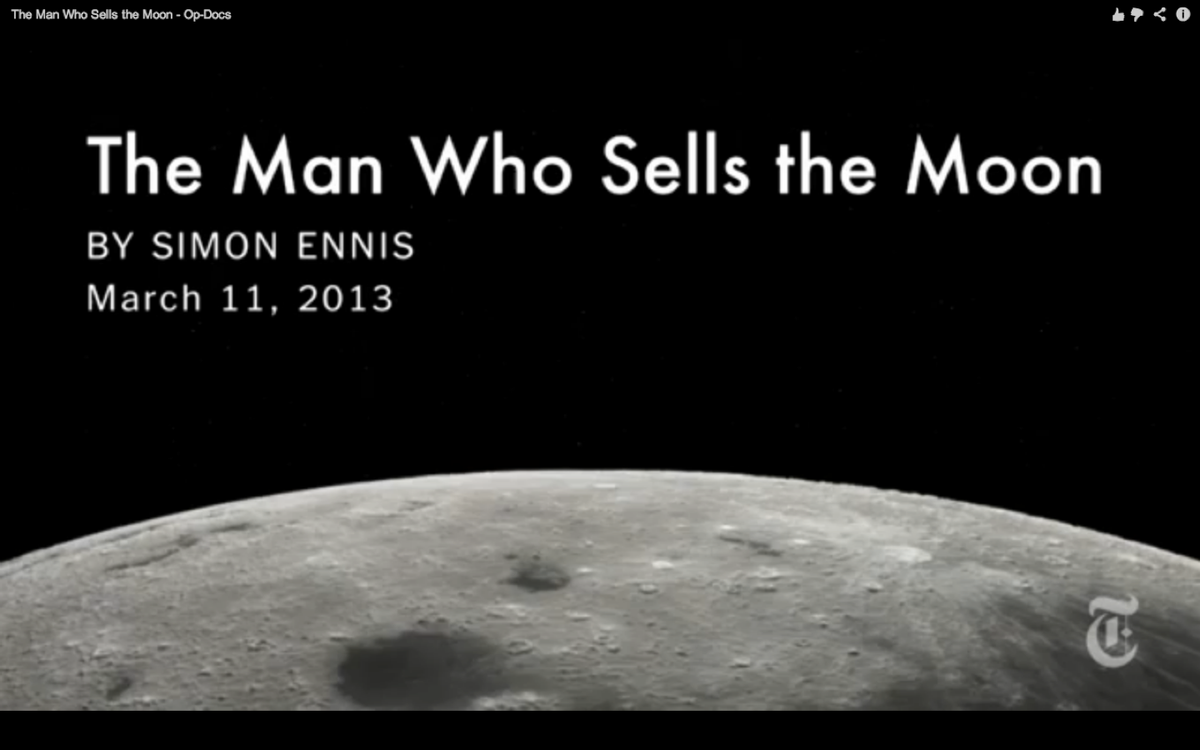 Scene still from "The Man Who Sells the Moon"
--

This week, we look at stories about Palestinians and Israelis claiming the same land and homes, Vladimir Putin’s thugs cracking down on NGOs and bloggers, child brides in countries like Afghanistan, scams aimed at robbing your grandparents and an entrepreneur – some call him a “lunatic” – who's selling property on the moon.

In our ongoing partnership with Salon, the editors of The I Files plow through hundreds of hours of YouTube offerings to bring you the best investigative videos that highlight this week’s news. Please let us know if there are any stories you think we’ve overlooked – we’d love to hear from you.

To keep abreast of the Web’s most compelling news stories and documentaries, please take a moment to subscribe to The I Files, YouTube’s one-stop investigative news source. Subscribing is free, easy and helps support nonprofit journalism.

Last weekend, Palestinian protesters demonstrating against Israeli occupation clashed with government soldiers in the West Bank and Gaza. They were commemorating Land Day, an annual protest against Israeli land confiscations. Earlier, in a speech during his first presidential visit to Israel, President Barack Obama expressed his support for a two-state solution and reaffirmed the right of Palestinians to live freely on their own land.

This documentary chronicles the lives of Palestinian family members who were evicted from their East Jerusalem home by Israeli settlers, a striking moment that was caught on tape. The family of 12 now lives crammed into the house of a relative – right next door to the settlers who claimed their home. This excerpt looks at the seizure through the eyes of seventh-grader Mohammed El Kurd.

“He became aware,” says Mohammed’s grandmother. “He became a man older than his age.”

A version of this piece that aired on Al-Jazeera just won a Peabody Award, often described as the Pulitzer Prize of U.S. broadcast awards.

Over the last couple of weeks, Russian authorities have come under fire for raiding the offices of Amnesty International and other human rights groups and nongovernmental organizations. Hundreds of raids have been conducted, and many more are expected. While the government has characterized these searches as routine surveillance of suspected foreign agents, others fear that this represents a new crackdown on civil rights. Mikhail Gorbachev, the last president of the Soviet Union, joined the chorus of protest in a scathing speech attacking President Vladimir Putin’s authoritarian rule.

“Putin’s Kiss” follows teenager Masha Drokova through her rise as an ambitious and influential member of Nashi, a Kremlin-backed political youth organization that grooms the future elite of Russia and works to counter anti-Putin opposition. Drokova became a prominent face of the organization after she famously kissed Putin at a ceremony while receiving a medal from him. In this excerpt, Drokova’s loyalties are challenged when a journalist friend and outspoken government critic is beaten in a vicious attack caught on surveillance tape.

“Too Young to Wed: The Secret World of Child Brides,” Stephanie Sinclair for National Geographic

The New York Times featured a horrifying story this week about an Afghan man who says he was forced to sell his 6-year-old daughter into marriage to pay off a debt. Subsequent reports that an anonymous donor had intervened to pay off the debt were a welcome respite, but no guarantee that the girl won’t be forced into marriage again.

The epidemic of child marriage is starkly illustrated in National Geographic’s “Too Young to Wed: The Secret World of Child Brides.” Blending still photography, video and audio recordings, photographer Stephanie Sinclair reveals the tragedy of young girls from around the world who have been forced to marry much older men because of poverty, debt settlement or tradition. While underage marriage is outlawed in most countries, one in three girls in the developing world still will be forced to marry before they turn 18 – an estimated 100 million girls over the next decade. Sinclair has spent nearly a decade documenting the suffering of these girls.

This report is, unfortunately, particularly timely with news that the Syrian civil war has led to a boom in the child bride market, with stories of older men shopping for young and vulnerable wives among the refugees.

“Just Hang Up,” Dan Rather Reports

We’ve all gotten that call or received that letter in the mail telling us that it’s our lucky day – we’ve won the lottery! All we have to do is send in a small fee and pay a few taxes and the prize will be ours. At this point in the hustle, most sense something amiss and walk away. But this installment of “Dan Rather Reports” finds that seniors are especially vulnerable to these kinds of lottery scams.

“Just Hang Up” details an international network of scam artists who are bilking senior citizens out of hundreds of millions of dollars. Most victims never report the crime out of fear they will lose their independence if they are deemed unfit to handle their own affairs. “Dan Rather Reports” travels to Jamaica, the epicenter of the scamming industry, where this crime is so pervasive that the local police have established a dedicated lottery scam task force to deal with the problem. In a twist, some in Jamaica view these scams not as crimes, but as reparations for the suffering the country experienced during its history as a slave colony. A popular reggae song even makes the case to an infectious beat. The investigation also gives a nod to the elephant in the documentary – Why would someone turn over hundreds of dollars to someone he or she doesn’t know? – and finds one possible scientific explanation.

“The Man Who Sells the Moon,” Simon Ennis

While this last piece doesn’t exactly qualify as classic investigative work, this New York Times Op-Doc excerpt from Simon Ennis’ documentary “Lunarcy!” is a fun, humorous profile of a man who makes his living selling plots of land on the moon (as well as Mars, Venus, Io and Mercury). Dennis Hope found what he calls a loophole in the 1967 U.N. Outer Space Treaty that prohibits nations – but not individuals – from claiming ownership of extraterrestrial bodies.

Hope explains that these lunar plots are “as real as any other properties you can buy on Earth.” He says he has sold almost 600 million acres to date. “I’m the wealthiest individual on the planet,” he boasts, “in theory.”

I was easily caught up in Hope’s sweeping entrepreneurial vision – until he started talking about the non-Earth-based governments he’s been in touch with to discuss architectural plans for their lunar embassies.